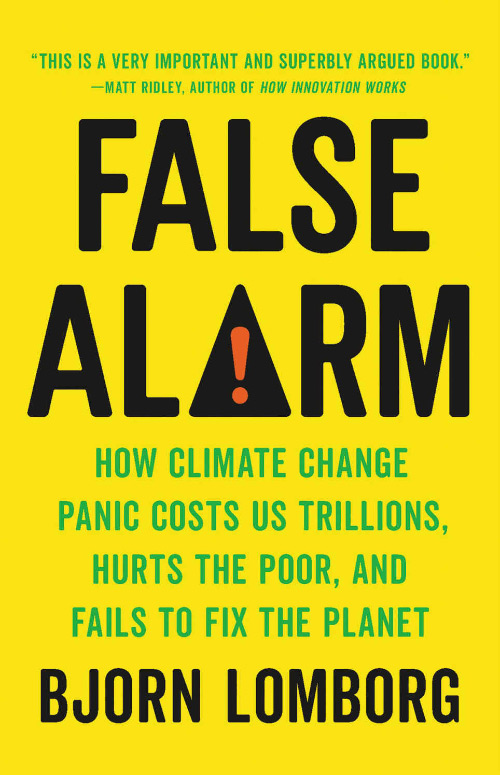 False Alarm
How Climate Change Panic Costs Us Trillions, Hurts the Poor, and Fails to Fix the Planet
Bjorn Lomborg
Kindle Hardcover Paperback Audiobook
This book review is a web exclusive for the Spring 2021 issue of The Independent Review.

Bjorn Lomborg, who rose to fame after publishing The Skeptical Environmentalist (New York: Cambridge University Press, 2001), has become increasingly frustrated with climate “alarmists”—those who paint climate change in apocalyptic terms. As the title of his latest book explains, he argues that growing climate alarmism does not serve its stated ends. It fails to “fix” the planet, it harms the poor, and it is very expensive. All three of these points are argued effectively in False Alarm, which is a useful handbook for one needing to challenge alarmists and instruct those who they influence.

Lomborg cannot be dismissed by alarmists as a climate “denier.” He emphatically states that “global warming is real” (p. 6) and backs up his belief with estimates of temperature trajectories. However, he qualifies this statement by immediately adding that global warming “is not the end of the world. It is a manageable problem” (p. 6), likening it to a case of diabetes. Rather than going on a crash diet that will only worsen our overall health, Lomborg suggests that—like actual diabetics—we learn how to live with the problem, mitigate it a bit and concentrate our efforts on dealing with other, bigger problems.

If you were an alarmist, perhaps his most compelling argument would be that the current set of responses to global warming—the kind embedded in the Paris Agreement and mainstream policy proposals in the U.S.—simply won’t make a dent in the problem. Lomborg argues that even if all these policies are adopted—at a cost of trillions of dollars per year—the planet’s temperature will continue to rise and temperatures will be only a hair below what they would be if “business as usual” was followed instead. However, if you were an alarmist you might not care about this, seeking instead to demonstrate—to yourself and fellow-thinkers—that at least you care and are trying to do something more than “complacent” people like Lomborg. Lomborg is too pragmatic to accept such signaling. By all accounts, his goal is to actually solve problems, as demonstrated in the thoughtful book he edited, How to Spend $50 Billion to Make the World a Better Place (New York: Cambridge University Press, 2006).

Strengths of the book include a chapter titled “Extreme Weather or Extreme Exaggeration?,” which uses historical statistics to demonstrate that damages commonly linked to warming have not risen over time. This includes a strong downward trend in global climate-related deaths from 1920 to 2019 (Figure 4.4), a noticeable downward trend in global weather-related disasters as a share of GDP in the last three decades (Figure 4.5), a clear downward trend in flood costs as a percent of GDP in the U.S. (Figure 4.1) and a set of calculations demonstrating that although hurricane damages in the U.S. are rising, the trend would disappear if historical hurricanes had hit the country as it looks today (Figure 4.3)—that is, if they hit a country with today’s massive cities like Miami and Houston in places where hurricanes have always hit. The same chapter documents a declining incidence of droughts worldwide and a reduction in fires—including a 25 percent reduction globally in burned areas over the past couple decades, based on satellite readings. Many of the useful tables in the book can be found in a lengthy article by Lomborg (“Welfare in the 21st Century: Increasing Development, Reducing Inequality, the Impact of Climate Change, and the Cost of Climate Policies,” Technological Forecasting and Social Change, 156, 2020).

Another convincing chapter, “How Climate Policy Hurts the Poor,” reminds us that most climate policies drive up energy prices, making them the equivalent of regressive taxes, since the poor spend a greater percent of their income on energy than the rich. In addition, it’s important to realize that these policies also make food more expensive. The opportunity cost of an SUV-tank full of biofuels is enough food to feed a poor child for about a year, Lomborg reports.

Lomborg’s favored solution to global warming is the standard economists’ solution—a global Pigouvian tax set equal to the marginal external costs of greenhouse gas emissions. He largely defers to Nobel-laureate William Nordhaus in selecting the optimal tax, which he suggests would initially add only 18 cents to the price of a gallon of gasoline. Unfortunately, he never grapples with the issues of measuring these damages correctly, especially in a world with potential technological breakthroughs in the pipeline. Ultimately, however, he basically admits that an optimal carbon tax won’t really matter, as the path with and without such as tax is virtually the same in terms of both global temperatures and global GDP. There are carbon taxes that could push us to zero emissions, but these would be so large that they are likely to cut GDP almost in half.

His favored solution is innovation, strongly encouraged with subsidies on green technology. Refreshingly, he admits that most of these subsidized projects will be duds. (The historical record would seem to bear this out.) But, it doesn’t matter, he says, because in the grand scheme of things research and development are “cheap” and we only need one big breakthrough to solve the problem. Whether the political system will deliver this or simply give more resources to favored allies in the climate-industrial-complex is another question. He advocates research on energy storage (without which solar and wind power aren’t particularly helpful), as well as investments in nuclear power and carbon capture technology. In addition, he sensibly points out that we will need to adapt to high temperatures and that we already have. For example, the spread of air conditioning has reduced heat-related deaths (which are already considerably lower than cold-related deaths worldwide and even in countries like India) and many places can build affordable coastal barriers if sea levels rise. They already have. Lomborg reports that 110 million people around the world live “underwater at high tide”—below the level of the surrounding seas—even in developing places such as the Mekong Delta of Vietnam (pp. 23-24). Finally, Lomborg—like an increasing number of people—notes that geoengineering, such as increasing the earth’s reflectivity, is there as a “back up” plan. In fact, if you are a true alarmist and think we have only a few years to solve the problem, geoengineering is the only solution to the problem.

The alarm continues to sound. But, if it’s a false alarm, why haven’t we turned it off? It appears that politics is in an odd equilibrium. Many voters want to hear apocalyptic stories, which allow them to hiss at villains (like fossil fuel companies and people in other political camps) and feel they are morally superior. But many (probably most?) of these same voters don’t want to take the drastic actions these alarmist warnings suggest, because they sense that a carbon-neutral world of expensive energy would wreck their modern lifestyles, despite being sold stories about free lunches. Some are content to have it this way—the conveniences of modern life with a little angst and some contempt for people who announce that the problem is “manageable”—along with some relief when they hear this conflicting message. Besides, the costs of the policies adopted to date (e.g. subsidies and renewal energy portfolios) are largely hidden and few hear the message that the world’s poorest people might be bearing the costs of these policies (e.g. by higher food costs). This feeds the demand for professional alarmists, who reap the benefits of alarm and never have to pay the price. It’s their job! And they keep getting better at it. But so do people like Bjorn Lomborg, who show that global warming isn’t catastrophic, that we can handle higher temperatures if we make the kind of sensible adaptations we’ve been making throughout human history and that it will be easier to make any needed adaptations if we encourage worldwide economic growth.