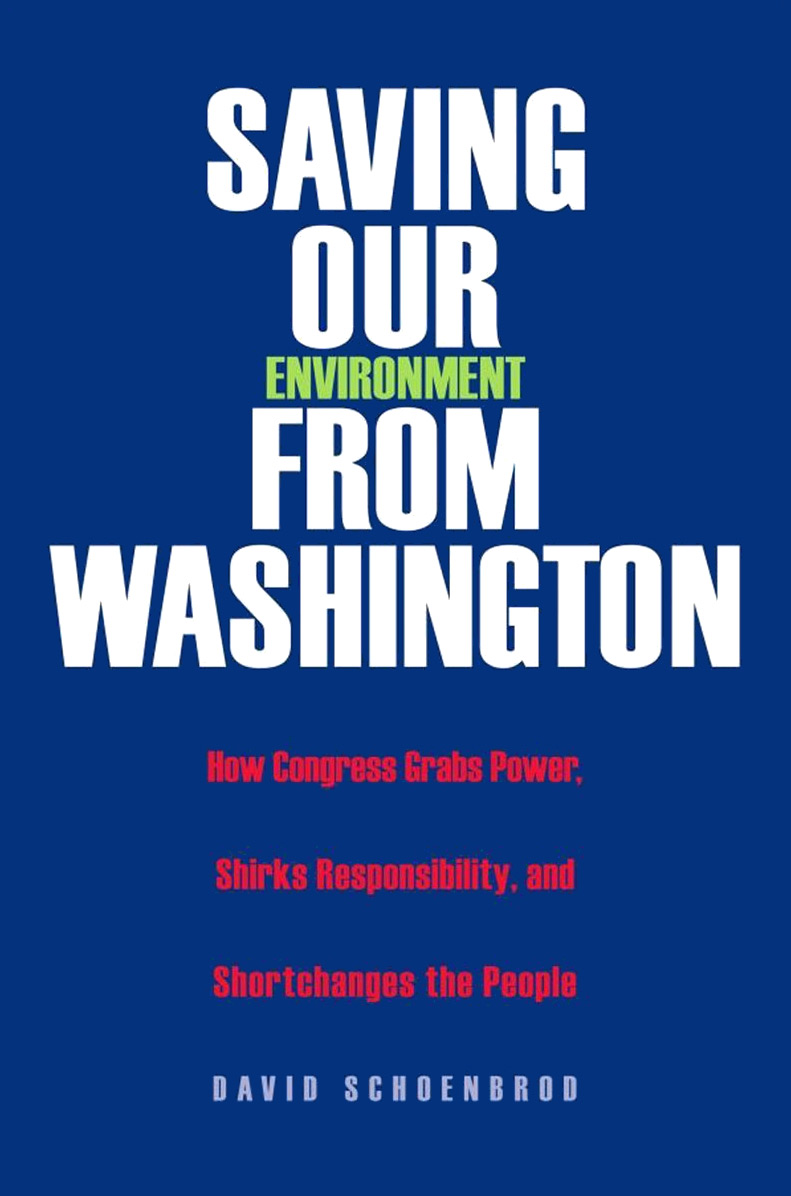 Saving Our Environment From Washington
How Congress Grabs Power, Shirks Responsibility, and Shortchanges the People
David Schoenbrod
Kindle Hardcover Paperback
This book review appeared in the Summer 2006 issue of The Independent Review.

As a young environmental activist, Schoenbrod believed centralized regulation was the key to environmental progress. As he recounts in the book, he assumed that powerful federal regulatory agencies staffed with disinterested bureaucrats and technical experts were the best hope for environmental protection. Removing key environmental policy decisions from the tumult of legislative politics was supposed to allow the experts within the EPA to adopt public-spirited measures to preserve environmental quality for current and future generations.

Fresh out of law school, Schoenbrod joined the Natural Resources Defense Council (NRDC), created to “do for the environment what the NAACP Legal Defense Fund had done for civil rights” (p. 22). From his position at the center of key environmental policy debates, he saw the regulatory process in all its glory—and it wasn’t pretty. Whereas he once believed a federal regulatory agency “should have the power to make the environmental rules for the entire country” (p. 5), he now seeks to make environmental policy “less elitist and more accountable to ordinary people” (p. 8). Indeed, he wants to save the environment from the very institutions currently entrusted with its protection.

Schoenbrod’s baptism came in his efforts to remove lead from gasoline. Although the lead phaseout is generally considered one of environmental law’s greatest successes, Schoenbrod’s experience in fighting the EPA over lead for nearly a decade was the beginning of his gradual disillusionment with contemporary environmental law. It was well known that sufficiently high exposure to lead can retard children’s intellectual development and that leaded gasoline was a major source of exposure. After Congress adopted the 1970 Clean Air Act, the EPA seemed ready to act. Then politics intervened, and action was postponed. After years of litigation, the lead was finally taken out, but by foisting the lead issue onto the EPA, Congress avoided responsibility and delayed environmental progress.

In essence, this story can be repeated many times over. The Clean Air Act, as amended in 1990, is 450 pages long. Yet many of the law’s requirements are not in the act itself, but in the 7,200 pages of implementing regulations adopted by the EPA, which in turn are supported by hundreds (if not thousands) of pages of rationales, guidance documents, and additional materials. And this is just one of many federal environmental statutes. It is no wonder some analysts compare federal environmental regulation to Soviet-style central planning. Schoenbrod, for his part, suggests another metaphor: the EPA is a “military organization.” As he explains, “Top-down military organization is the logical consequence of thinking that the environmental captain should be insulated from accountability to the passengers of Spaceship Earth” (p. 62). Only the EPA can be trusted to delineate and enforce environmental mandates, so the EPA has the ultimate authority to determine what measures are enough and how clean is clean.

The EPA, however, is not as insulated from external pressure as some might hope. Faced with a series of rigid and impossible mandates—“the battle plan that Congress has told the EPA to execute is beyond its [the EPA’s] capacity” (p. 63)—the EPA cannot set its priorities in an effective manner. The failure to meet any particular statutory mandate can be challenged in court, typically by environmental groups (including Schoenbrod’s former colleagues at the NRDC). The result is a form of “central planning through litigation” (p. 64), creating what one former EPA administrator called “battered agency syndrome,” in which outside groups ultimately set environmental policy priorities by the strategic use of litigation. So much for entrusting environmental policy to a bureaucratic elite.

Part of Schoenbrod’s solution is to remove much environmental policymaking from Washington, D.C. He argues that “states and localities rather than the federal government should make the rules controlling almost all pollution sources” (p. 8). The federal government should confine itself to cases in which the states are truly incapable of acting on their own, such as when activity in one state creates a pollution spillover into another state’s jurisdiction. Such spillovers call for federal involvement, even if only to police Coasian bargains among states to resolve their transboundary disputes, but little of the federal regulatory apparatus can be justified on such grounds. Rather, “the EPA controls the regulation of millions of farms, businesses, and government activities, regardless of how localized their impact may be” (p. 8). Rather than reduce transboundary pollution problems, EPA regulations at times have made them even worse, as they did when early air-pollution rules encouraged utility companies to erect taller smokestacks, sending emissions farther downwind.

Federal regulation of local environmental matters is often justified on the grounds that states cannot be trusted to adopt environmental protections. Yet, as Schoenbrod notes, the historical data tell quite a different story. States began adopting aggressive environmental measures well before the creation of the federal EPA. Indeed, some federal regulations were adopted because states were regulating too much, not too little. When states such as California began to impose emissions standards on new cars, the nation’s automakers rushed to Washington and endorsed uniform federal standards to preempt most independent state efforts. National manufacturers in other markets have followed suit. Where not preempted by federal law, states remain on the cutting edge of innovative environmental measures today, moving away from command-and-control regulations toward more flexible and market-oriented regimes. If, as some believe, property-based environmental protections are the most efficient and ethical means to protect the environment, such experiments are more likely to emerge from fifty competing jurisdictions than from a centralized policymaking apparatus in Washington, D.C.

A revival of environmental federalism is only one-half of the solution Schoenbrod proposes. In addition, he argues that “elected legislators should make the pollution ­control rules” (pp. 8–9). Rather than an EPA that makes most of the rules with which companies and individual citizens must comply, Schoenbrod envisions an agency that only conducts research, issues recommendations to Congress, and implements and enforces the policy decisions that Congress makes. The ultimate policy judgments—what to clean up, by how much, at whose expense—should always be made by elected representatives rather than by career civil servants and political appointees. Under Schoenbrod’s proposal, Congress cannot demand that air or water be made “safe” without defining what safe means. Does it mean a one-in-one-hundred-thousand mortality risk or a one-in-a-million risk? What is the threshold for nonlethal risks? Or for risks to wildlife and to aesthetic concerns? And does it matter how much such a standard costs? Because such choices are inherently political, they should be made by politicians whom the people can hold accountable.

Politicians often avoid accountability by pretending that “science” or purportedly apolitical experts in bureaucratic agencies will resolve such complex policy questions and current environmental concerns. But this assumption remains a pretense. As Schoenbrod explains, science’s “finely calibrated techniques provide no right answer to many questions of the greatest policy consequence” (p. 69). Science can inform environmental policy by roughly quantifying the extent and nature of given environmental risks and the likely consequences of given actions. Even setting aside the substantial uncertainty that accompanies most scientific risk assessments, science still has little to say about the ultimate question of what, if anything, to do about a given environmental concern. Such limitations are rarely acknowledged in contemporary environmental policy. Pretending that science can provide the answers effectively disenfranchises much of the public from any dialogue on environmental policy and, if anything, increases the potential for political mischief by economic special interests (those whom economists call “rent seekers”) and ideological activist groups. Is a one-in-a-million risk worth regulating? Science cannot say because the ultimate decision is and must be a normative one. This issue explains why delegation is such an important matter—because value judgments are being made by a largely unaccountable technocracy.

Schoenbrod’s experiences show “that ordinary politics can succeed where the EPA fails” (p. 113), yet his standard for “success” clearly differs from the one that many of his former environmentalist colleagues advance. Requiring direct legislative action might result in the adoption of fewer environmental regulations, but the ones adopted would more likely reflect the needs and values of the people the laws would affect. The question is not one of more or less protection than we have today, but of a different kind of protection. In some respects, standards would be more stringent, in others less. In Schoenbrod’s world, New York communities would not waste millions of dollars dredging the Hudson River for PCBs, and state governments or perhaps even local water systems, not the federal EPA, would set drinking-water standards. At the same time, Schoenbrod believes, absent the power to shirk responsibility by delegating to the EPA, Congress would have reduced lead in gasoline at a faster rate. Another possibility that Schoenbrod does not consider is that ending delegation may encourage greater exploration of environmental solutions completely outside of the political process.

Unlike some critics of contemporary environmental policy, Schoenbrod does not wish away important environmental concerns, nor does he dismiss all federal efforts. The relevant question is not whether, by some measure, environmental conditions have improved (they have) or even whether the current federal regulatory system deserves some of the credit for such trends (it does). Schoenbrod is more interested in whether the existing arrangements are the best ones that we can devise. A given program cannot be deemed a “success” if other approaches might have achieved the same or better results at lower cost. Environmental protection is important, but so are other societal goals. If federal environmental regulations suppress economic growth, discourage technological innovation, and constrain individual liberty, then available alternatives deserve consideration. Such is the ground on which Schoenbrod ultimately rests his case.

Schoenbrod is the first to admit that his recommendations are not “new”: “Our Constitution sought to guarantee a republic in which government would be as close to home as possible” and in which no “regulation without representation” would occur (p. 9). This constitutional design is not perfect, but it is considerably better than what we have now. As Schoenbrod’s experiences have convinced him, “those constitutional ideals are the safest road to the public interest, including the public’s deeply felt interest in a clean earth” (pp. 9–10). Today, environmental decisions with profound effects on local communities are often made hundreds or thousands of miles away in Washington, D.C., and even there the most important policy judgments are made by unelected bureaucrats rather than by the people’s elected representatives. “This arrangement lets members of Congress profit from the environment issue on the cheap” (p. 9), and it encourages the proliferation of environmental rules. The nation’s constitutional structure was not created with environmental protection in mind. Nonetheless, Saving Our Environment makes a powerful case that more attention to the constitutional values of federalism and legislative accountability would improve the environmental protection we have today.