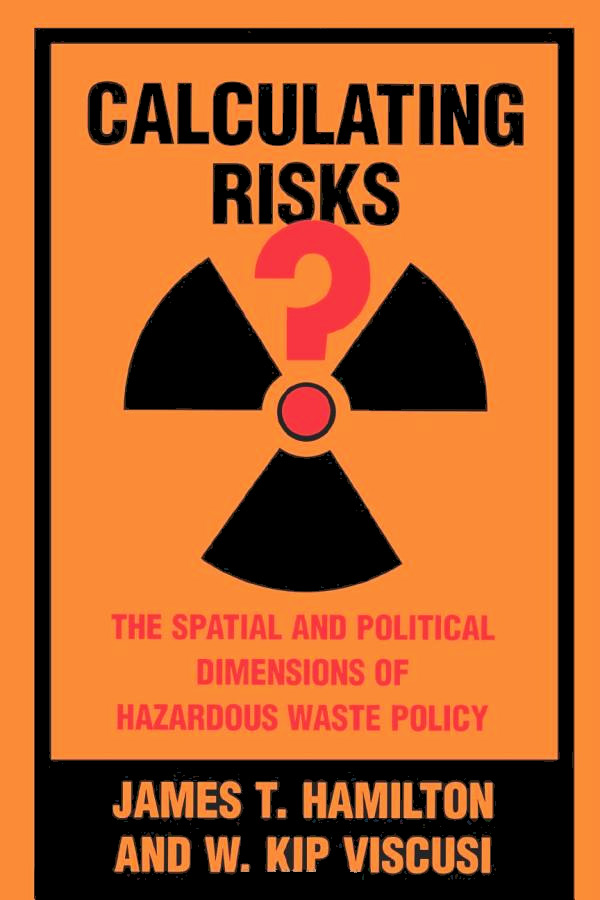 If you want to find out what can be learned about environmental policy from excellent fundamental research, read Calculating Risks by James T. Hamilton and W. Kip Viscusi. In contrast, the debates over environmental policy are often muddled by poor empirical work; politicians and newspapers use the “telling” anecdote; and many public policy writers on environmental topics throw together bits of data from some standard sources and then perform statistical analysis, much of which suffers from aggregation biases and inadequate data.

Hamilton and Viscusi decided to dig deep and collect the kind of data needed to make an assessment of the effectiveness of environmental policy. They study the Superfund, which has been established to clean up hazardous-waste sites around the country. They start with Environmental Protection Agency (EPA) documents that describe the hazardous waste and the nature of the dangers in more than two hundred sites around the country. They then match that information with data on socioeconomic factors in the same areas. In some case studies, they collect housing prices to allow them to examine the impact of the Superfund sites on housing values. Finally, they develop information about the political and economic forces that might influence EPA decisions about cleaning up various sites. Originally a series of articles that went through the peer-review process and were published in some of the leading economics and public-policy journals, Calculating Risks can be understood by policymakers, yet it contains enough dense material to ensure that strong-willed and avid students of political economy can examine exactly how Hamilton and Viscusi came to their conclusions. The result is an excellent political-economic analysis of Superfund.

Hamilton and Viscusi suggest that Congress could save more lives at a lower cost by changing the basis on which Superfund sites are chosen for cleanup. Currently, the Superfund laws require that the EPA use risk to the individual as the basis for decisions about which sites to clean up and how much to spend on cleaning up each site. Thus, if an individual faces a one in one thousand chance of contracting cancer at site A but only a one in ten thousand chance of contracting cancer in site B, site A should be cleaned up first. This approach certainly seems reasonable, but the focus on the pure risk to the individual ignores an important feature of many of the Superfund sites. In many of them, only a few families are at risk of exposure to the hazardous waste, whereas at a small number of sites thousands of families are at risk. In my example, suppose one thousand people live at site A and forty thousand at site B, and it costs $200 million at each site to eliminate the hazard. Hamilton and Viscusi point out that, with only $200 million to be spent, it would be better spent at site B, but EPA rules require that site A be cleaned up instead. Given the different numbers of people exposed, probably only one person would be saved from cancer by spending the $200 million at site A, in contrast to probably four at site B.

Hamilton and Viscusi document that no one actually lives within range of many of the sites under consideration. The focus on individual risk has led the EPA to consider the possibility that people might live near the site in the future. Given the widespread publicity about the Superfund sites, it is likely that few if any persons would move next to the site, and therefore resources may be spent to eliminate hazards to which no one will ever be exposed. Finally, the authors document that the EPA focuses on maximum risks instead of mean risks, and as a result the agency overstates the true risks that individuals face at the sites.

Using the EPA data on the hundreds of possible paths for risk to human lives at the Superfund sites, Hamilton and Viscusi perform a detailed analysis of how to weight these risk and determine the extent of exposure now and in the future. They show that if Congress allowed the EPA to focus on the combination of the median risk to individuals and the likely number of people exposed, nearly the same number of lives could be saved while spending about $1.5 billion less than the current spending on such cleanups. That $1.5 billion sum might then be used to save lives in other areas. In a number of settings, the EPA is spending more than $100 million per statistical life saved. Many other government agencies, focused on other types of risk, are spending only $5 million to $30 million per statistical life saved. Meanwhile, estimates from various studies of labor and housing markets (many of which Viscusi and various associates performed) suggest that people value statistical lives at about $5 million when spending their own money.

The question remains, What determines the EPA’s choice of sites? We know that the EPA is subject to pressure from a variety of sources while trying to carry out its congressional mandates. Community groups lobby hard when they discover hazardous waste in their areas, and the relative strength of such groups varies from locale to locale. Perceptions of risk are not always accurate and are often determined by the extent of publicity on different types of risk. Areas that have strong environmental groups, representatives and senators with pro-environment voting records, or higher voter turnout get more attention from the EPA. As a result, the EPA sometimes ends up targeting projects in ways that save fewer lives than could have been saved had all of the political pressures been applied equally across sites.

As Hamilton and Viscusi observe, community groups can gain from lobbying for expensive cleanups because other taxpayers are sharing the bulk of the bill. In a study of real-estate markets near Superfund cites in Grand Rapids, Michigan, they find that the value of housing is lower for houses nearer the hazardous sites. The decline in house prices implies a market value of a statistical life of about $5 million, similar to the value found in labor-market studies. Thus, when their own lives and cash are at risk, people are likely to spend less to clean up the site than they would demand the federal government spend.

Anyone interested in environmental policy needs to take a long, hard look at Calculating Risks. In places, the analysis is somewhat dense for the noneconomist, but in both the introduction and the conclusion of each chapter, the authors do a good job of explaining their results and the significance of what they have discovered. Some readers might quibble with certain specific interpretations, but my sense is that such quibbles will not influence the overall effect of the book. Hamilton and Viscusi have put together a truly impressive set of evidence, and they have painstakingly analyzed the operation of the Superfund. I doubt that one could find a better analysis in any other source.

The analysis is also fair-minded. The authors are not cranks tilting the data and the analysis to conclude that the Superfund should be eliminated. Instead, they focus on trying to find ways to make the program more effective. The EPA could save a similar number of lives at much lower cost if the EPA were allowed to follow an alternative strategy for choosing where and when to clean up hazardous waste. Further, the funds saved by the change in EPA policy could be used to save more lives in other areas. Of course, there is no guarantee that reducing the spending on the Superfund would lead to greater risk-reduction spending elsewhere. After all, one of the key lessons of the book is that political pressures can sway agency decisions in ways that are not always consistent with the stated goals of their projects.

Price V. Fishback
University of Arizona and National Bureau of Economic Research
Energy and the EnvironmentEnvironmental Law and Regulation
Subscribe Buy This Issue Get the App