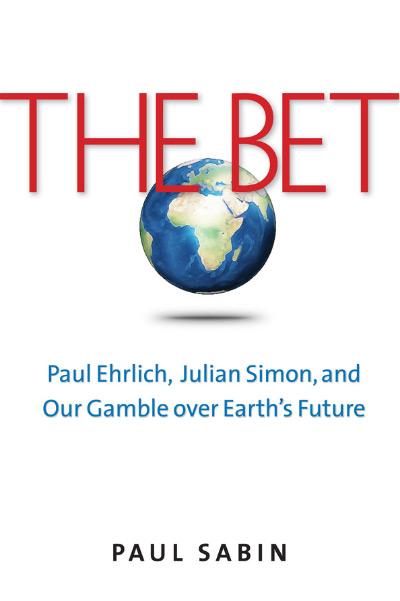 Humans are not butterflies.

Paul Sabin explores a half-century of environmental policy and environmentalism through the lens of two outsized personalities—biologist Paul Ehrlich and economist Julian Simon. Tired of the fawning attention given to Ehrlich and his unfulfilled gloom-and-doom predictions, Simon famously challenged him to put his money where his mouth was. In the pages of the Social Science Quarterly in 1980, Simon asked, “How often does a prophet have to be wrong before we no longer believe that he or she is a true prophet?” (qtd. on p. 134), and goaded Ehrlich into a wager on resource scarcity as demonstrated by the trend in raw material prices. They settled on a bet covering $1,000 worth of five metals (a $200 contract for each metal). If the inflation-adjusted price of the metals rose from 1980 to 1990, Simon would pay the difference; if the prices went down, Ehrlich would pay the difference to Simon. In monetary terms, Simon bore almost all the risk—at most he could win $1,000 (if the prices all fell to zero), but his potential losses were unbounded. And he gave Ehrlich a blank check by letting him pick the five commodities. As you’ve probably heard, Ehrlich lost the bet about as spectacularly as possible. The prices of all five of the commodities fell. Jointly, they fell a remarkable 57 percent.

Simon had no way of knowing that commodity prices would fall so sharply during the 1980s. Over many recent ten-year periods, the prices of natural resources have risen; in many other periods, they have fallen. But it’s fitting that Ehrlich lost this particular bet so convincingly. He (and his friends John Holdren and John Harte) failed to do their homework, choosing to bet on copper, chromium, nickel, tin, and tungsten based on little more than gut instincts. For example, as Paul Sabin points out, the price of copper was abnormally high at the start of the bet due to temporary factors, including strikes in Chile and political disruptions in Zaire and Zimbabwe. Simple economic theory suggests that the price would drop after these temporary supply reductions ended. More importantly, it’s fitting that Ehrlich lost the bet because his other, better-known, and emphatic predictions were so profoundly wrong.

Sabin details Ehrlich’s upbringing, his youthful fascination with nature and bitterness that his suburban New Jersey neighborhood was losing its undeveloped tracts, his early academic research as a lepidopterist, and his certainty that human fate paralleled that of butterflies. Ehrlich burst onto the scene in the late 1960s selling a message of looming catastrophe and urging extreme, coercive, dehumanizing “solutions.” He reached a mass audience, becoming a best-selling author and appearing on Johnny Carson’s show twenty times. Based on clumsy models of animal demography, developed during his academic career studying butterflies, he predicted that human populations and standards of living were set to crash—and soon. Audiences ate this up. Like so many other biologists, he saw humans—like all other species—as tightly bound by an unalterable, nature-given resource base. Population could rise only temporarily and must crash back down; rising standards of living were fleeting and probably driven by depletion of the resource base. In economic terms, this view saw natural-resource supply curves as vertical—with the amount supplied incapable of expanding due to the incentive of higher prices. Instead, supply must inexorably shift inward as resources were used up. With population growth shifting demand curves out and supply curves of natural resources relentlessly shifting in, this worldview could only mean that real prices of natural resources would rise over time—as Ehrlich and his colleagues predicted.

Ehrlich’s rhetoric was unusually extreme, as were his solutions. Virtually anything that could slow, stop, or reverse human-population growth received his blessing. In The Population Bomb and other works, he argued that government should adopt policies to achieve the optimum sustainable population size, which he approximated at about 17 percent to 40 percent of the earth’s population circa 1970. In other words, much of humanity needed to be eliminated. More babies were a threat to peace, so the right to breed was intolerable. More gently, he urged changes in the tax code to reward childless couples and promoted placing taxes on children and diapers. One of his favored panaceas was sterilization. When asked if vegetarianism were the answer, he replied, “[O]nly if eating salads makes men impotent” (p. 11). All this good news was delivered with an arrogant, acid tongue that denounced his opponents as “morons,” “idiots,” and “criminals.”

Despite a professed aim for balance, Sabin gives much less attention to Julian Simon. Perhaps this is because the record on Simon is thinner, his influence was not as great, and—because he made fewer outrageous comments—he’s simply not as interesting of a story. Ironically, Simon initially held many of the same zeropopulation- growth views as Ehrlich. His epiphany came in 1969, when he visited the Iwo Jima memorial and contemplated the eulogy given by Rabbi Roland Gittelsohn, who bemoaned the loss of potential human talent and promise. Simon wondered, “[W]hat business do I have trying to help arrange it that fewer human beings will be born, each one of whom might be a Mozart or a Michelangelo or an Einstein—or simply a joy to his or her family and community and a person who will enjoy life?” (p. 79). In crude terms of supply and demand, Simon’s first point was that each person isn’t just another mouth to feed; he or she is also another set of hands and another brain to help solve problems—in terms of the bet, another person to add to the demand for resources but also another person to shift out the supply curve for resources as well. His more profound point, however, was to conclude that even if more people does mean falling standards of living, he didn’t care. People are valuable in and of themselves. At heart, he discovered, these environmentalists were misanthropes. Paul Ehrlich went to India, saw crowded slums, and was horrified. His solution was to put these poor souls out of their misery by denying the next generation of them the right to be born. To Ehrlich, “hell” was too many “other people.” To Simon, however, population growth should thrill, not frighten. Don’t ever believe that economists crassly boil human well-being down to material standards of living. Simon didn’t. I’ve never known one who does. The economists I know recognize that humans are not butterflies. We are far more capable of solving problems—and we have souls.

Straining to be gracious in the face of defeat, Ehrlich declared that “[i]f Simon disappeared from the face of the Earth, that would be great for humanity” (p. 203) and—ignoring basic facts—claimed victory, arguing in The Population Explosion (written with Anne Ehrlich) that the two previous decades had proven him right. “Then [in 1968, when he wrote The Population Bomb (New York: Simon and Schuster)] the fuse was burning; now the population bomb has detonated” (qtd. on p. 197). Despite his dire predictions of famine, disease, and a return to subsistence, global population continued to grow, as did life expectancies, and standards of living. (The World Bank estimated global life expectancy at fifty-nine years in 1970 and sixty-six years in 1990.) And although author Paul Sabin rightly concludes that “human history over the past forty years has not conformed to Paul Ehrlich’s predictions” (p. 219), Ehrlich emerges as the hero of Sabin’s story and has somehow been vindicated. Sabin decides with no real support that Simon “made it more difficult to solve environmental problems. . . . His optimism paradoxically inhibited the kinds of problem-solving market and technological innovations that produced the improvements that he celebrated” (p. 223). On the contrary, Simon and like-minded environmental economists, such as those at the Property and Environmental Research Center, have helped develop innovative solutions to environmental problems—solutions that get the incentives right to harness human ingenuity, solutions that actually work toward the goal of making the planet a more livable place for humans (and even for butterflies). Sabin ignores the dismal failures of overreaching environmental policy and the immense rent seeking the environmental movement has triggered. (See, for example, Bruce Yandle, “How Earth Day Triggered Environmental Rent Seeking,” The Independent Review 18, no. 1 [Summer 2013]: 35–47.)

Aside from his focus on Ehrlich and Simon, Sabin chronicles the era’s shifting environmental policies, with considerable coverage of the initiatives of Richard Nixon, Jimmy Carter, and Ronald Reagan. Despite his avowed balance, he’s rather gentle on Carter’s ungainly policies, which advocated shivering in long underwear rather than using common sense and human ingenuity to tackle high energy prices, but finally concludes that, “[v]iewed through a later lens, Carter’s fears about looming shortages appear exaggerated” (p. 130).

After finishing The Bet, I was left wondering. Despite all his false prophecies, his outrageous policy ideas, and his—according to Sabin—truly arrogant behavior, Ehrlich was given a MacArthur “Genius Grant” and a raft of other prestigious awards and honors. How much more wrong would he have had to be in order for him not to emerge as the hero in this story? Market gurus generally earn reputations as prophets only if they deliver success. Warren Buffett is considered an “oracle” because he’s a prophet who delivers profit. When the Harvard Economic Service famously dismissed ominous signs before the onset of the Great Depression and repeatedly asserted that the contraction would soon be over, people stopped paying attention to it, and it closed up shop. Why didn’t a similar fate await Ehrlich? Perhaps because humans are not butterflies. We have heroes. We have egos. We have worldviews. We hate it when reality doesn’t measure up to our wishes and sometimes have the luxury to willfully ignore the facts.

Robert M. Whaples
Wake Forest University
Civil Liberties and Human RightsEconomic History and DevelopmentEconomyEnergy and the EnvironmentEnvironmental Law and RegulationLaw and LibertyNatural ResourcesScience and Public Policy
Subscribe Buy This Issue Get the App