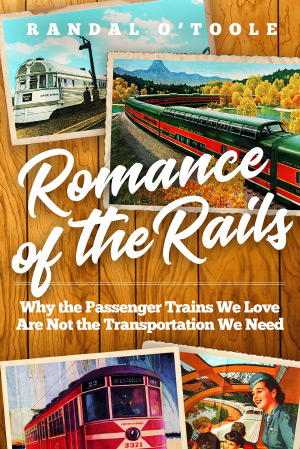 Romance of the Rails
Why the Passenger Trains We Love Are Not the Transportation We Need
By Randal O’Toole
Kindle Hardcover
This book review is a web exclusive for the Spring 2019 issue of The Independent Review.

Randal O’Toole’s ferroequinologist credentials include a byline in Passenger Train Journal and vast prior experience riding the rails and collecting memorabilia. The story arc of Romance of the Rails mirrors that of enthusiast histories: emergence, early successes, decline. Jim Scribbins’s The 400 Story (Park Forest, IL: PTJ Publishing, 1982) is an example for the railroad enthusiast. Romance of the Rails, by contrast, is for the policy community, and it suggests that passenger trains, in any form, never had much of a chance to be commercially successful, and, apart from in a few historically thickly settled areas, are not a good use of public money today.

The opening chapters explain that problems confronting passenger train operators arose under the best of circumstances.

Prior to the motor-car and the aeroplane, there weren’t enough leisure travelers to fill the cross-country trains, even with the inducement of railroad-owned hostelries at national parks. Timings of long distance trains precluded opportunities to make a day trip for shorter distance travelers: before flyover country, there were rural states that deluxe trains traversed at night.

Electric interurban railways briefly offered improved service linking the lesser central places and the smaller communities. A rural resident could flag down a trolley to get to town to shop or to take goods to market, as elaborated by H. Roger Grant in Electric Interurbans and the American People (Bloomington, IN: Indiana University Press, 2016, pp. 60-79). Interurbans often shared trackage in the larger cities with streetcars, where the commuting experience was not necessarily as favorable, particularly for female riders.

The rapid emergence and more rapid decline of the interurbans from about 1900 to 1935 foreshadowed the late twentieth century dot com mania. The motor-car and the Good Roads movement both appeared shortly after electric railways did, and the use of private motor-cars as transport, whether offering privacy or providing jitneys for hire, were challenges too daunting for most interurban and streetcar companies to handle. That noted, contemporary light rail and downtown circulator streetcars are descendants of the trolleys, and ridesharing services are descendants of the jitney services the trolley companies went to great troubles to suppress. We will see echoes of those earlier tussles among contemporary transit authorities, taxi services, and ridesharing networks.

In a few cities the electric passenger train had a heavier form as subway and elevated rapid transit. O’Toole concedes a role for these, only in a few cities, strongly suggesting no new ones be contemplated.

The steam railroads’ final effort to attract passenger traffic offered day trains on thickly settled corridors running at speeds today’s Amtrak can only dream of. When the Interstate Commerce Commission required additional safety appliances as a condition of running trains at those speeds, many railroads slowed the trains rather than make the installation. That might have been a concession to economic realities. Alternatively, engineering considerations constraining the mixing of fast passenger trains with ever-heavier freight trains stayed the railroads’ hands. Better automobiles, the Interstate Highways, and jet aircraft took care of the rest.

Thus, the story arc of passenger trains: in Romance of the Rails, O’Toole groups chapters on the emergence of the various intercity and urban passenger rail services. Then come the challenges and the decline. That’s the first half of the book.

The second half concentrates on the policy implications, which, he argues, are mostly unfavorable for passenger trains, thus not productive uses of public money. The normative principle structuring his argument, stated succinctly (p. 289), is “No one should have the right to decide to live in a place with higher transportation costs and then expect taxpayers to subsidize them.” Perhaps, though, Romance of the Rails identifies opportunities to do positive analysis of transportation policy that doesn’t preclude Passenger Rail, whether public money is involved or not.

Some of those opportunities are outside my area of expertise.

Second, his contrasts of North American railroads with European practice recognize that North American carriers are far more productive freight haulers. Sixty years ago, John R. Meyer et. al., The Economics of Competition in the Transportation Industries (Cambridge: Harvard University Press, 1959) established the stylized facts of freight railroads having a competitive advantage on line-hauls of four hundred miles or more, and passenger trains capable of competing in corridors of two to four hundred miles. The transportation sector has numerous irreversibilities and nonconvexities, and generations of theoretical econometricians have identified all the ills that empirical investigation is subject to: and yet, with governments appropriating money to separate freight trains from passenger in Chicago, strengthen the Interstate Highways for longer and heavier tandem and triple rigs, and configuring urban streets to accommodate 53 foot trailers, there is likely to be value in new research into traffic allocation forty years after deregulation.

Finally, the positive case for Passenger Rail presents opportunities to apply price theory and political economy. O’Toole’s work continues the curious libertarian attitude toward public spending on transportation, which the late Paul Weyrich characterized as “road socialism,” although it might be more charitably understood as a less unfavorable stance toward public money for internal improvements where exclusion is costly, as may be true of roads, waterways, and airways. Railroads, which can more easily exclude unauthorized use, are less worthy of public money. Because the use of roads, waterways, and airways is rival, at the margin the provision of rail service to reduce congestion on the other modes might reduce the subsidies to places with higher transportation costs, or hold the highway system in trust for future users. For instance, expenditures that permit faster passenger trains sometimes allow railroads to speed up their intermodal trains. O’Toole notes (p. 304) one example in the Chicago–St. Louis corridor. Consequently, there’s less wear on the Interstate Highways and perhaps less urban traffic congestion.

Perhaps O’ Toole could contemplate inefficiencies in current transportation funding methods more effectively than by perpetuating the criticism of publicly funded rail projects that compares, e.g., the full cost of Nashville’s commuter rail service (chapter 15) with buying each potential rider a Prius. That criticism pretends that additional automobiles can be added to the road network without any increases in lanes or parking lots, something that is almost certainly not true. Nor are ridesharing services and autonomous cars-for-hire (when those become feasible) likely to be more effective than trains in taming congestion. Like the jitneur of a century ago, the operator of a ridesharing car rationally treats insurance and maintenance as irrelevant at the margin. Surge pricing simply sweetens the payoff during rush hours. On the other hand, the operator of a successful for-hire car service will have to consider the full costs of maintaining a fleet of cars (taxis without drivers) and surge prices at peak times might be sufficiently high that commuters view their trains as bargains.

The trains are thus not likely to go away. O’Toole continues to see a future for them in the thickly settled cities of the east coast. Chicago’s commuter trains (pp. 264, 267) have experienced increasing ridership without any special promotion: consider the Naperville expresses of ten or more bilevel cars on twenty-minute headways during the rush hours. Furthermore, trains provide a social milieu that’s not available on the bus or airliner. The reversible seats of commuter trains have long provided space for a hand of cards after work; on weekends parents flip a seat to keep an eye on the kids. On the longer-distance trains, John Stilgoe notes in Train Time (Charlottesville: University of Virginia Press, 2007, p. 122), “the ordering of railroad space is subtly different” and frequently an environment providing opportunities for social or commercial transaction.

Might freeing taxpayers from the responsibility of subsidizing the residents of places with higher transportation costs in fact lead to more trains? That’s speculation on my part, and yet: the presence of steep rent gradients in communities with substantial agglomeration economies and high value-added activities in part reflects high transportation costs. Lower transportation costs produce shallower rent gradients, ceteris paribus. Under the current political institutions, much money for fixing crumbling roads and bridges or providing train service goes from localities to the federal government, there to be allocated according to the politics of the moment, and subject to national standards. Perhaps a devolution of transportation funding to the states and municipalities might allow local improvements. Virgin Rail in Florida (and possibly to Las Vegas and St. Louis)? Less onerous parking requirements in Schaumburg? New York and New Jersey dealing directly with the Hudson Tubes and the Tappan Zee Bridge? Investor-owned bus companies or electric railways as local circumstances suggest?