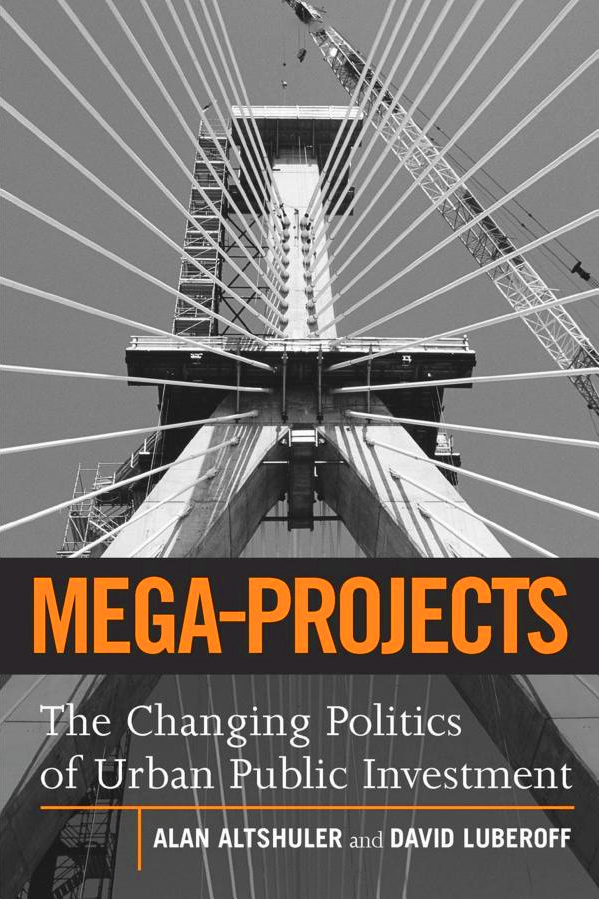 Mega-Projects
The Changing Politics of Urban Public Investment
By Alan Altshuler and David Luberoff
Kindle Hardcover Paperback
This book review appeared in the Spring 2005 issue of The Independent Review.

As I write this review, the six-year highway-transit reauthorization bill is bogged down in Congress. The bill pertains to only part of U.S. infrastructure, but at nearly $300 billion (including approximately 2,800 earmarks) for six years, it illustrates the size and scope of the federal role in infrastructure provision: so large that the objective everywhere is to get the rest of the country to help pay for local projects.

Perhaps all that one has to know is revealed by some of the data presented in Mega-Projects: The Changing Politics of Urban Public Investment that focus on major urban highway, transit, and airport projects built in the United States since the 1950s. The authors’ tables 4-1 and 4-2 show that the federal share of spending on highways rose from 12 percent in 1932 to 25 percent in 1999; the federal share of capital spending on highways rose from 18 percent in 1932 to 44 percent in 1999. Their table 6-3 shows a zero percent federal role in U.S. transit provision through the early 1960s, rising to more than 40 percent in 1980 and settling at 15 percent by the end of the 1990s. Their table 5-4 shows a moderate decline of the state and local share of airport spending since 1956. It has become child’s play for Washington, D.C., politicians to explain that local public goods have some national role and that therefore the national government ought to be involved in providing those goods.

In all areas, the megaprojects that survived are the ones for which winning political coalitions could be formed, those that worked when Congress divided the spoils. Cost-effectiveness and consumer sovereignty play essentially no role. In this milieu, what gets built matters less than that something gets built—with nonlocal taxpayers’ money. Representatives sent to Washington, D.C., are under pressure to bring home the bacon and to “create local jobs.” The merits of what gets funded in the process are of secondary importance.

Mega-Projects bears witness to the unfolding of these contemporary facts of life, presenting detailed case studies that recount the full stories behind several well-known megaprojects—highways, airports, and transit systems—built in large U.S. cities in the final four decades of the twentieth century. The case studies include Boston’s Big Dig, Los Angeles’ s Red Line, and Denver’s new airport, among others.

The authors carefully document how, no matter the era, insider politics worked to get various projects implemented. The federal role expands in any event. In the last “era,” for example, the winning coalitions were somewhat rearranged as environmentalism emerged, but otherwise were little changed. The political maneuvers remain a matter of leveraging local tax dollars with contributions from the rest of the country. Post-1970, the game defined by the National Environmental Policy Act (NEPA) and state-level counterpart legislation (“little NEPAs” ) extended government standing to bring suit to all manner of “stakeholders.” It is no surprise that these changes promoted new insiders and prompted new coalitions, which the authors dub “bottom-up federalism.”

I recall a conference in the early 1970s at which one astute observer noted that we now build transit instead of highways because builders and environmentalists hold hands when seeking transit funds but fight each other when highway projects are suggested. Local coalitions that tap into the opportunity for federal funds emerge no matter what the prevailing tastes happen to be.

The authors admit several times that the projects they describe cannot pass a cost-effectiveness test. Beyond that admission, however, the lessons they draw are not the ones I would draw. They begin with the idea that “[w]hat competition means for American local governments, above all, is striving to make themselves attractive to private investors” (p. 3). Not really. Some of the projects discussed can best be described as “the gifts that keep on taking.” The short-term local economic jolt from large-scale construction spending with leveraged dollars dominates any long-term economic attractiveness that the projects might have. Therefore, the authors’ frequent use of the terms business interests and business-led coalitions is misleading. The interests that matter are those that see an opportunity for immediate subsidy or gain: politically favored and connected groups in construction, engineering, and development, and their workers and vendors. The authors state that “[t]he most notable recent trend in American politics, one that appeared to be sharply reinforced by the presidential election of 2000, is the ascendancy of organized business at all levels of government” (p. 43). Yet it takes two to tango. What their data and their case studies reveal is that politicians and their allies, including those in business, have succeeded in cornering a growing share of national wealth in the service of projects and propositions that pass muster in an era of limited due diligence by the many who pay the bills.

The winning coalitions behind the various megaprojects cross conventional private-public distinctions. The authors’ renderings of relevant theoretical perspectives (“elite-reputational,” “pluralist,” “public choice,” “elite-structural,” and “historical-institutional”) seem to require that coalitions exist within the one camp or another. Instead, what really matters is a coalition that can bring home the bacon. The authors see the post-1970s as the era of “do no harm politics.” Perhaps, however, it really is, more than ever, an era of minimal perceptions of harm in a setting of minimum due diligence. When federal funds are available, perceptions are decisive in the creation of a broad enough coalition of local interests.

Where does this sort of politicking lead? I still flinch when I hear serious and seemingly ethical people admit matter-of-factly and earnestly that big lies have to be told to get big public projects built. They are often some of the same people who celebrate the fact that environmental impact reports for such projects are routinely required by law. (On the godfather of big-project moral depravity, Robert Moses, see Gene Callahan and Sanford Ikeda, “The Career of Robert Moses: City Planning as a Microcosm of Socialism,” The Independent Review 9, no. 2 [2004]: 253–61.)

Cost overruns and performance shortfalls occur all the time, not because forecasting is intrinsically difficult but because “ projections” systematically err in one direction for purely political reasons. A recent survey (Bent Flyvbjerg, Nils Bruzelius, and Werner Rothengatter, Megaprojects and Risk: An Anatomy of Ambition [New York: Cambridge University Press, 2003]) concludes: “Based on a sample of 258 transportation infrastructure projects worth $90 billion (U.S.), it is found with overwhelming statistical significance that the cost estimates used to decide whether important infrastructure should be built are highly and systematically misleading. The result is continuous cost escalation of billions of dollars.... Underestimation cannot be explained by error and is best explained by strategic misrepresentation, i.e. lying” (p. 279). The problem was also considered in a collection of essays published in 1985 (Martin Wachs, ed., Ethics in Planning [New Brunswick, N.J.: Transaction, 1985]). Both sources are cited in Altshuler and Luberoff’s Mega-Projects.

In a world where most infrastructure provision is by governments and involves politics, and where opportunities exist to get funds from nonconstituents, what can we expect? Now that the dubious but politically popular “urban revitalization” mission has been linked with “ megaprojects,” how can these projects be dealt with in any other way? The banner of “urban revitalization” can be draped over any questionable project, especially when the leveraging of federal funds is at stake.

“Rational policy analysis” is an extension of what James Buchanan calls the “romantic view of politics.” It hangs on a hundred years after the Progressive Era because it still provides the cover that gives pork-barrel projects an appearance of respectability.

Megaprojects are attractive to politicians as jobs programs, with the prospects of actual useful infrastructure services running a far second. The story that comes through in all of the case studies is the simple fact that any “analysis” is easily hijacked. What may surprise some is the extent to which so many smart people still take the whole charade seriously. We do live in a world of rational ignorance. Not surprisingly, the authors conclude that “ The hallmark of successful mega-project finance is that projects should appear costless, or nearly so, to the great majority of voters. The easiest way to achieve this is to rely on funding from higher levels of government” (pp. 236–37).

Such is the lesson. Mega-Projects fills in the important background. We Americans may sneer at the “kleptocracies” of the Third World, but in our much more sophisticated system massive amounts of resources are continually transferred from the taxpayers at large to favored and politically connected groups in the service of projects whose costs far exceed their benefits.