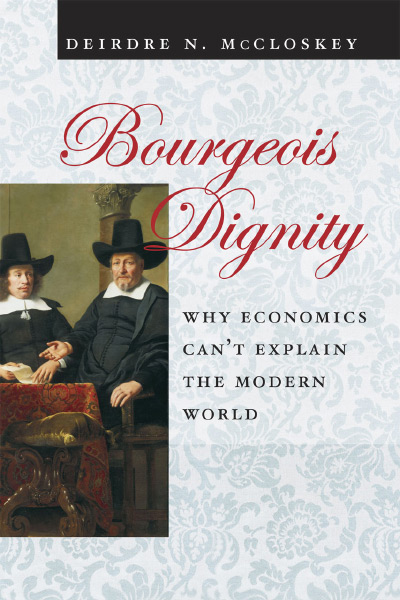 In an exhaustive history of English-language economics prior to Adam Smith, Jacob Viner wrote: “A constant note in the writings of the merchants was the insistence upon the usefulness to the community of trade and the dignity and social value of the trader, and in the eighteenth century it appears to have become common for others than the traders themselves to accept them at their own valuation” (Studies in the Theory of International Trade [New York: Harper & Bros., 1937], p. 107). Most economists see nothing especially interesting in this statement. It reports, at best, a forgettable historical tidbit. A comment merely about how people wrote (and presumably spoke) about commerce and merchants is economically irrelevant sociology, containing nothing worthy of an economist’s attention.

I, too, would have reacted in this way to Viner’s observation had I not read Deirdre McCloskey’s Bourgeois Dignity. Although Viner himself quickly sped past his own observation to discuss other matters, my attention was gripped. This fact about attitudes in the eighteenth century, I realized, is evidence for the revolutionary theory that McCloskey offers to explain the Industrial Revolution.

And if any fact about human history demands explanation, it is the Industrial Revolution—the “wealth explosion,” as historian Steve Davies calls it, or the “Great Fact,” as McCloskey herself names it. Readers of this journal need not be persuaded that this Great Fact is both factual and great—“great” both in the sense of being enormous in scope and effect and in the sense of being a huge blessing for humanity.

A fact so great does not languish for long without attempts being made to explain it. Such attempted explanations are as old as the Great Fact itself. They include exploitation of wage workers, slavery, colonialism, Protestantism, Catholicism, science, temperate climates, temperate citizens, glorious political revolutions, and lower transportation costs and the resulting expansion in trade.

None of these explanations, however, explain when the Great Fact manifested itself (the eighteenth century) and where it began (northwestern Europe). Some of these explanations highlight important preconditions for the Industrial Revolution—for example, reasonably secure private-property rights—without clarifying why the Industrial Revolution started when and where it did start. Other explanations fail to account for any of the unique aspects of the Great Fact—for example, slavery is a millennia-old institution whose changes are negatively associated (both temporally and spatially) with the Great Fact.

One of the many rewards of reading Bourgeois Dignity is to receive from a worldclass historian as penetrating and eloquent a tour of commercial and industrial history as can possibly be fitted into a single volume. Along with this tour, the reader also is treated by a world-class economist to a masterful review of each of the major (and some not so major) contending explanations of the Great Fact.

Having convinced her readers (or at least this reviewer) of the inadequacies of each of the previously offered explanations of the Great Fact, McCloskey argues that what does explain it is a sea change in attitudes toward the bourgeoisie. For the first time in history, the bourgeoisie of northwestern Europe in the eighteenth century came to possess dignity. The bourgeoisie and their activities finally came to be regarded by a large enough swath of society as dignified and respectable.

Being group animals, we care deeply what other people think about us. And what people think about us is typically conveyed, to us and to others, by talk. McCloskey insists that, first in Holland and soon afterward in England, the way people talked about profit-seeking merchants and commercial and industrial innovators changed. That talk became more admiring. What we might call the “dignity return” to bourgeois activities rose.

And at the same time, at least the relative “dignity return” on nonbourgeois activities fell. Less were the relative amounts of dignity meted out to those who specialized in slaughtering people in battle or in idling about in manor houses counting the hectares on which peasants toiled to produce sustenance for the nobility and the clergy.

As the dignity return to bourgeois activity rose relative to that of other occupations, so predictably, too, did the amount of bourgeois activity. People do respond to incentives! The Industrial Revolution was launched.

Of course, McCloskey’s rhetoric-centered theory of the Great Fact does not deny the importance of secure property rights, the benefits of prudent and industrious behavior, the helpfulness of low-cost means of transportation, and the wonders of science. Even the most boundless glorification of the bourgeoisie would have done nothing to spark the Industrial Revolution if, say, private-property rights in northwestern Europe were insecure or if the terrain there was so rugged and harsh that transportation over even short distances cost a prince’s ransom.

But all the pre-McCloskean explanations fail because none of the many phenomena that these various theories propose as The Cause is unique to eighteenth-century northwestern Europe. Secure property rights existed in England long before the Glorious Revolution of 1688, and prudent, sober attitudes about saving did not first appear then and there. Nor did big cities (by eighteenth-century standards) and their potentially thick markets. Nor did science. Nor did reductions in transportation costs.

It is possible that eighteenth-century northwestern Europe was the site of a perfect storm of all or most of these conditions coming together for the first time in history—secure property rights and a respect for science comingling for the first time with falling transportation costs and saved surplus values wrung by Calvinists from exploited peasants.

But this possibility is no more plausible—indeed, it seems less so—than McCloskey’s explanation that, given a few rather historically common preconditions (such as secure private-property rights), a happy and historically unique change in attitudes toward the bourgeoisie unleashed humankind’s innovative zeal as never before. And that zeal, once unleashed, is not easily driven back into lethargy—thankfully so, given the battering that bourgeois activities and norms have taken over the past century or more from professors, pundits, and politicians whose impressive skills in rhetoric are exceeded only by their shameful ignorance of basic economic principles.

Bourgeois Dignity is the second volume in a projected six-volume work. So there’s much more to come. One of these volumes is a promised fuller explanation of why rhetoric in eighteenth-century northwestern Europe turned so pro-bourgeois. That would be nice to know. But note that even if no one, including McCloskey, can supply a compelling explanation of why pro-bourgeois rhetoric emerged where and when it did, the thesis of Bourgeois Dignity remains unscathed. The historically unique change in rhetoric can be the spark of the Great Fact even if we do not understand what sparked the change itself. Things happen sometimes for no reason reducible to analytic explanation. Maybe that rhetoric change “just happened.”

I doubt, though, that such was the case. If the cause or causes of the rhetoric change can be identified, Deirdre McCloskey is just the scholar for doing so successfully.

I close with a cavil. I dispute the truth of Bourgeois Dignity’s subtitle Why Economics Can’t Explain the Modern World. Economics can explain the modern world. Solid evidence is McCloskey’s own work. Although appointed to faculties of English, history, and communications in addition to economics, she is above all an economist. And her contributions as an economist to our understanding of the modern world rank second to none among scholars from whichever fields you might name.

McCloskey does economics correctly—as a systematic, open-minded, truthseeking inquiry unburdened by dogmas about what does and doesn’t count as a “legitimate” explanation.

The economics that she rightly accuses of falling short in its efforts to explain the modern world—the economics that ignores human passions other than for the prudential pursuit of observable material gain and that bullyingly rejects as sissified any methods of inquiry other than those expressed in formal mathematics—is, although dominant, not the only species of economics. Economics properly done can indeed help to explain the modern world. Bourgeois Dignity is exhibit A.