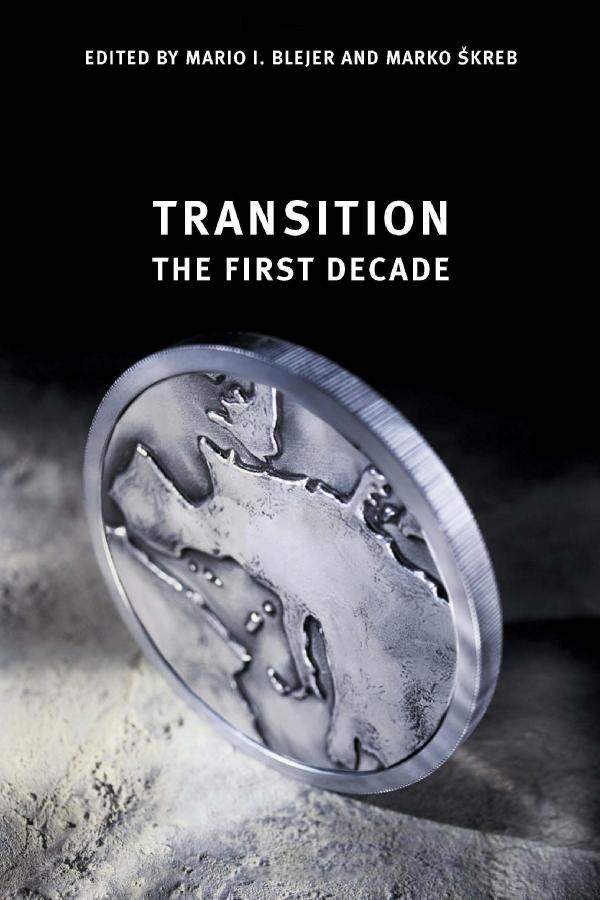 Transition
The First Decade
Mario I. Blejer and Marko Skreb
Hardcover Paperback
This book review appeared in the Summer 2003 issue of The Independent Review.

Transition is a report card on the first decade of the transformation of central and eastern European countries into free-market, private-property economies. The introductory chapter by coeditors Mario Blejer and Marko Skreb is an excellent summary of fourteen diverse contributions to this volume. Chapters by Linn, Kolodko, Gaidar, and Larosiere deal with transition in general. These authors discuss alternative methods of institutional restructuring, identify some major issues and problems of the transition process, and evaluate observed results. Contributions by Hagen and Strauch, Dabrowski, Halpern and Nemenyi, Dlouchy, Sonje and Vujcic, Bole, Nuti, Aslund, Mihov, and Daianu describe the results of transition in East Germany, Poland, Hungary, the Czech Republic, Croatia, Slovenia, Belarus, Bulgaria, and Romania.

The book contains much useful, although occasionally repetitive, information about the first decade of transition in the central Europe and the Baltic (CEB) states and the Commonwealth of Independent States (CIS). Explicitly or implicitly, most contributors favor the “holy trinity” of transition: macroeconomic stability, privatization, and liberalization. They generally praise the role of the International Monetary Fund, the World Bank, and other international organizations, and they favor dirigisme as a method of transition. (For the best analysis of transition from above versus transition from below, see C. Sunstein, “On Property and Constitutionalism,” Cardozo Law Review 14 [1993]: 907–35.) There is no shortage of lists enumerating what CEB and CIS governments should have done or could have done better or still should do. The contributors have uneven success in fitting their narratives about transition policies and results into a theoretical framework. Hence, the reader of this volume might fail to appreciate the cause-and-effect relationships that connect alternative institutional reforms to observed results via incentives and transaction costs. Contributions by Linn, Kolodko, Hagen and Strauch, Dabrowski, and Gaidar deserve additional comments.

Johannes F. Linn’s chapter, “Ten Years of Transition in Central Europe and the Former Soviet Union: The Good News and Not-So-Good News,” is a carefully researched overview of economic reforms in central and eastern Europe. CEB countries have achieved sustainable growth or moved in that direction, have developed credible legal institutions, and have maintained tolerable fiscal discipline. Although recognizing differences in the results of transition within CEB states, Linn fails to ask whether those differences are accidental. The results of transition in the CIS were worse than those in CEB states, a difference Linn attributes to adverse initial conditions in the former region. Linn’s observation is correct, but it teaches little. Not long ago, Texas prairies also had adverse initial conditions relative to those in, say, New York or western Europe. Linn makes a puzzling statement regarding Ukraine and Russia: “the hope must be that both countries ... will find political consensus that makes it possible to turn the economies of these countries around as has been the case in much of Latin America after decades of uncertain and counterproductive economic and political fortunes” (p. 43). Discussing the effects of transition on income inequalities, he says, “One of the great achievements of the socialist system was the great improvement in and the wide access to social services and to safety nets. As a result, the incidence of poverty in the region was low” (p. 31). I read this statement to mean that community A, in which one-half of households believe themselves to be poor because the other half has swimming pools, is worse off than community B, in which all households are not poor because no one has a swimming pool.

Grzegorz W. Kolodko’s chapter, “Postcommunist Transition and Post-Washington Consensus: The Lessons for Policy Reforms,” is informative but also monotonous to read. The author tells us that early in the 1990s there was a plan (the Washington consensus) for the transformation of CEB states and the CIS into free-market, private-property economies. The plan failed because economic policies based on the Washington consensus ignored the importance of institutions. Kolodko then argues for a new plan for transitioning CEB states and the CIS into free-market, private-property economies that would emphasize outcome-oriented policies and institutional restructuring. He makes conjectures about the need for “wise” policies and “good” governance but offers no analysis to explain why some policies are good, whereas others are not. Given his preference for institutional reforms, Kolodko might have tried to identify the effects of alternative institutions on the incentives of decision makers and to suggest reforms that would raise the costs of forming rent-seeking coalitions to exploit those incentives. He also writes: “Too much attention is focused on means that hypothetically should lead to improvement in efficiency and competitiveness, instead of concentration on the outcome of these exercises” (p. 61). An alternative view is that the free-market, private-property economy is a process that creates incentives for individuals to interact voluntarily in the pursuit of their own ends and, in doing so, to create unintended outcomes. Transition from socialism to free-market, private-property economies in CEB states and the CIS should focus then on reforms that reduce the discretionary power of their governments. Finally, Kolodko asserts that “[I]f there is a choice between developing these institutional arrangement spontaneously (by chance) or in a way directed by the government (by design), then the latter option is more suitable in the case of post socialist countries” (p. 76, emphasis added). At a minimum, Kolodko should have explained why the writings of F. A. Hayek, Ronald Coase, Douglass C. North, and James M. Buchanan are not applicable to postsocialist economies.

“East Germany: Transition with Unification, Expectations, and Experience,” by Jurgen von Hagen and Rolf R. Strauch, is an excellent piece of research. The authors’ discussion of economic reforms in East Germany is informative but not tedious because they have fitted their narrative skillfully into a simple theoretical framework. For example, fearing low-cost competition from East Germany, West German unions and employers’ associations used the nationwide collective-bargaining process to raise wages in East Germany. As they expected, high unemployment benefits made the resulting unemployment acceptable to East German workers. However, the subsequent transfer payments from West Germany have raised the risk of institutionalizing East Germany as a transfer-dependent region of unified Germany. Still, hope remains for the future. Because the nationwide bargaining raises the costs of production for business firms in East Germany, these firms have incentives to leave employers’ associations (just as large firms in West Germany had incentives to cut the size of their labor force in response to codetermination in the late 1970s). Although the authors fail to analyze the costs to business firms of dropping out of nationwide collective bargaining, they draw an important conclusion: “long-term consequences of the labor market adjustments may thus be that East German wage-setting arrangements will gain more flexibility than those in West Germany” (p. 105).

“Ten Years of Polish Economic Transition, 1989–1999,” by Marek Dabrowski, is a well-written chapter. Whatever the short-run effects of finance minister Leszek Balcerowicz’s shock therapy might have been in the early 1990s, it put in place institutional structures that have kept Poland on a free-market path in spite of the subsequent election of pro-left political candidates. Dabrowski argues that a major driving force of transition in Poland has been new, never-privatized firms. Given that privatized, inefficient state firms have been the source of rent-seeking coalitions and corruption, the importance of creating conditions that encourage entrepreneurship is difficult to exaggerate.

“The Legacy of the Socialist Economy: The Macro- and Microeconomic Consequences of Soft Budget Constraints,” by Yegor Gaidar, is not merely about Russia. Compared to Kolodko and Linn, Gaidar offers better analysis and more useful insights into the issues and problems of transition in CEB states and the CIS. He makes four important points. First, all transition countries inherited the monetary overhang. The countries that withstood political and social pressure to abandon tight money policy and hard budgets predictably did better than others. Second, sustainable growth depends on the rate of growth of the new private sector (entrepreneurship) and the part of the state sector that has passed the market test (i.e., that does not need subsidies). Third, so-called market socialism is not a viable alternative; it is merely an expression of the socialism that is in hiding but not dead. Finally, the privatization of state-owned firms has been connected with the rise of a powerful rent-seeking group, which Gaidar calls nomenclatura-capitalist enterprises. This new managerial class (Adolf A. Berle and Gardiner C. Means’s classic indictment of the managers might finally find a place in the sun) “can accumulate nonpayments to the budget and can maintain a bargaining style of relations between enterprises and the state over real tax obligations that leads to ... the spread of corruption in the post socialist economy” (p. 325).

In the final chapter of the volume, “Transition Economies,” Jacques de Larosiere supports Gaidar’s position. He writes, “In a number of cases the privatization process has led to insider-controlled enterprises, and this has favored neither the transparency and effectiveness of the process nor the intensification of competition” (p. 484). Yet Larosiere fails to connect his remark about the effects of the privatization of state-owned firms explicitly to Gaidar’s and Dabrowski’s arguments that entrepreneurship is a key factor in the transition from socialism to a society of free and responsible individuals.