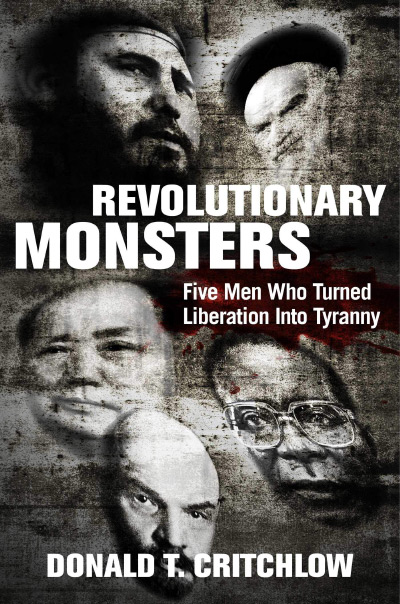 Revolutionary Monsters
Five Men Who Turned Liberation into Tyranny
By Donald T. Critchlow
Kindle Hardcover Audiobook Audio CD
This book review is a web exclusive for the Summer 2022 issue of The Independent Review.

Revolutionary Monsters is a serious contribution to our understanding of the evilest historical figures of the twentieth century and should serve us as a warning against rising autocratic regimes in Russia and elsewhere. It “provides a warning to those beguiled by the siren call of revolution” (p. ix).

Donald Critchlow, a professor of American political history at Arizona State University, has appeared on C-SPAN, NPR, BBC World News, and many media outlets. He has written for the Washington Post, New York Post, and National Review, has lectured in the United States and internationally, and is editor-in-chief of the Journal of Policy History. He is the author of numerous important publications including The Conservative Ascendancy: How the GOP Right Made Political History (2007, Cambridge, Mass.: Harvard University Press) and In Defense of Populism (2020, Philadelphia: University of Pennsylvania Press).

His new book is an attempt to provide a reader with a comparative biography of five men who influenced modern history and still affect our lives today. Their followers are numerous and fanatical; their shadow is behind terrorist regimes of North Korea, Cuba, and Iran; they are still revered in communist China and Vietnam, as well as by many admirers in the West and developing world. Following Marxist teaching first implemented by Lenin in Russia they built and embodied infamous tyrannies based on mass murder in which tens of millions of people of almost all nationalities, religions, and social backgrounds were tortured, maimed, and murdered.

Critchlow provides readers with a full assessment of the “revolutionary monsters” not only as serial political killers but also as tyrants who created their own personality cults and were presented to the masses as colossal father figures.

These revolutionary monsters—Vladimir Lenin, Mao Zedong, Fidel Castro, Robert Mugabe, Ruhollah Khomeini—initiated massmovements in the name of liberating their people from their oppressors: capitalists, colonialists, imperialists, or dictators. These revolutionaries rallied the masses in the name of freedom, only to become far more deadly and tyrannical than those they replaced. These five “offer supreme examples of narcissists holding messianic beliefs” (p. xvii). Critchlow notes that others might have been included in this study—Adolf Hitler, Benito Mussolini, Kim Il-sung, Francois Duvalier, Ho Chi Minh, or Hugo Chavez. We can add other socialist mass murderers to his list—Joseph Stalin, Josip Tito, Bolesław Bierut, Mátyás Rákosi, Khorloogiin Choibalsan, and Pol Pot, for example. However, these five initiated, and to a major degree succeeded in achieving, the spread of absolute state totalitarianism in the twentieth century and created the model killer states.

The first chapter“Lenin: Monster as a Dictator”provides a reader with an insightful biography of a man who changed the course of events of the twentieth century. Lenin and his murderous associates Stalin and Trotsky—affect our life today. Their followers are numerous and fanatical in their beliefs. Lenin’s shadow is behind terrorist attacks and the destruction of Afghanistan, Chinese pretense of world hegemony and Fidel Castro's atrocities in Cuba, as well as a worldwide crusade against capitalism. “Lenin and Trotsky believed that the Russian Revolution would ignite a working-class upheaval across Europe. Stalin, a former seminary student, took the more realistic view that world revolution was not imminent. It had to be consolidated in Russia and then promoted through subversion. But all three agreed that there should be no restraints on the party’s power. . . . The individual and individual rights were meaningless; what mattered was the party and its totalitarian authority” (pp. 6 – 7).

Lenin organized genocide against his own people and the destruction of his own country as well as numerous others, founded the first concentration camps in Europe, and became the father of the cruelest empire that humankind has ever known. Lenin initiated the spread of totalitarianism in the twentieth century and created the prototypical killer state, which was extended and “perfected” by his successor Stalin, as well as by other socialist mass murderers of the past century—Hitler, Benito Mussolini, Mao, Tito, Kim Il-sung, Castro, Ho Chi Minh, and Pol Pot to name a few.

Driven by class hatred and seeking revenge for the death of his elder brother Alexander, who was executed in 1887 for participation in an assassination attempt on Tsar Alexander the Third, Lenin’s regime decimated Russian society, reshaped its economy, and turned communism from an intellectual construction of Karl Marx and Friedrich Engels into a major global threat to human civilization.

Not many mass murderers are revered long after their crimes were exposed. Lenin is luckier than others—his corpse is guarded in the pompous mausoleum at the Kremlin wall in the heart of Moscow. Tens of thousands of towns, villages, and streets still bear his name in Russia and other former Soviet republics. The old Russian town Simbirsk, where he was born on April 22, 1870, was renamed as Ulyanovsk (after his family name) upon his death on January 24, 1924, and still bears his name. Thousands of his monuments were removed and put into “Monumental Zoos” across Eastern Europe, but thousands of others are well kept and still revered in Russia, Belarus, Kazakhstan, and other parts of the former USSR. Thousands of web sites, newspapers, and magazines, as well as books and “documentaries” fabricated by his communist followers and socialist “fellow travelers” still praise the “genius of proletarian revolution, organizer of the Communist Party of the Soviet Union and founder of the Soviet state” without any moral qualms, almost a hundred years after the death of this monster. Many Russian historians believe that Lenin was poisoned by his no less monstrous successor Stalin.

Russia is still laboring with the tragic effects of the Lenin/Stalin regime. In many regions the rural population lives under conditions that have deteriorated since the time of czars. At the same time the gigantic enterprises of heavy industry built by Stalin and his successors are disintegrating all over the former Soviet Empire leaving environmental disasters and hundreds of thousands of disgruntled and unemployed workers. Coercive collectivization and industrialization based on the "Great Terror" cost the country millions of lives. Despite all this, the adulation for Lenin in Russia is intriguing. Many Russians still regard him as one of the greatest personalities their country has ever produced. Today, almost a hundred years after his death, committed Leninists are still a vocal group in Russia. Russian president Vladimir Putin is known to be a closet Leninist himself and prevents removal of Lenin’s body from the Kremlin and his monuments from public display in most cities, towns, and villages of Russia. His own popularity is based on the cult of a strong man to lead the country. The idea that Russian society can only be managed by an autocrat with an “iron fist” still dominates the Russian mind where political thinking revolves around “great personalities.” It is of no surprise that Putin presides over the imposition of a de facto Leninist autocracy in Moscow.

The chapter on Mao is particularly forceful given the monstrously horrific scale of elimination of humans by the government-engineered famines and the destruction of historical monuments and artifacts, culture, and traditions in Communist China. With Mao we find one of the central features of the all-powerful ruler. Mao enjoyed total command and absolute control over his apparatus and is known for a most evil, amoral ruthlessness which would dwarf other mass murderers of the world from Genghis Khan to Adolf Hitler. “In the 27 years of his leadership, he held absolute power, governing over a quarter of the world population. His tenure was catastrophic. His leadership led to the death of at least 42.5 million of his own people from famine and violence” (p. 31).

Critchlow provides interesting details about Mao’s life and career, his wives, and his following in the West. Franklin Delano Roosevelt, who definitely liked Stalin, was fond of Mao. “General Patrick Hurley, appointed by Franklin Roosevelt as a special envoy to China in 1944, returned to the United States to tell the National Press Club in Washington in November 1945, ‘The only difference between Chinese Communists and Oklahoma Republicans is that the Oklahoma Republicans are not armed’” (p. 45).

Critchlow provides a brief but very informative overview of the late Cuban dictator Fidel Castro. Particularly interesting is the description of Castro's time at the University of Havana and early political activism. The environment in which he came of age was a dangerous one, rife with gangs, political corruption, and rumblings of revolution. Castro was aware of the injustices around him; unfortunately, his solution was not to help implement a more just economic, political, and legal system, but rather to institute a different form of tyranny.

This is followed by an amazing chapter on Robert Mugabe. I have traveled a lot in Southern Africa (Botswana, Mozambique, South Africa, Lesotho, Namibia) which is flooded with refugees from Zimbabwe. Almost single handedly Mugabe destroyed a beautiful country with the strongest economy in that part of the world and turned it into an absolute disaster. At the height of his regime, unemployment was 60 percent and inflation around 80 billion percent per month. “He left his nation a failed state for those he had promised to liberate” (p. 133). I disagree with Critchlow’s remarks about the nation’s “oppressive colonial regime.” Almost every Zimbabwean that I talked with would recollect the British Commonwealth fondly. Robert Mugabe “liberated” his country from the rule of law, property rights, economic freedom, and human rights of his people.

Another monster, the Iranian murderer Khomeini imposed himself on his people with the help of the United States. “President Jimmy Carter wrote to Khomeini as “one man of God to another,” while Andrew Young (U.S. ambassador to the United Nations) hailed him as a “twentieth-century saint,” and U.S. ambassador to Iran William Sullivan depicted Khomeini as a “Gandhi-like figure” (p. 138). The “man of God” unleashed unprecedented terror against his people and took over the U.S. Embassy. “Khomeini used the U.S. Embassy hostage crisis to further churn anti-American sentiments in the country” (p. 160). I had the dubious pleasure of working with Ambassador Sullivan and I remember how fondly he would refer to other “Gandhi-like figures” like Fidel Castro and Kim Il-sung.

Critchlow's writing style is very easy to understand by any reader whether familiar with history or economics or not. He introduces the reader to the upbringing of these revolutionary monsters, the evolution of their thought, their revolutionary ideals, and the atrocities that they committed. This book is needed now more than ever as a reminder that revolutionary monsters still exist, and they always come wrapped in the cloaks of compassion, equality, and social justice. The logic of history always ends them up in terror and mass murder.

This book documents the rise and actions of five revolutionaries who destroyed their nations by attempting to maintain absolute power over them. Crimes of Nazism were well exposed and condemned and the leaders of the German killer state were brought to trial. Horrendous crimes committed by the socialist killer states in the name of the murderous Marxist ideology are still waiting to be exposed and condemned. This is a book for anyone interested in how evil disguised as social justice can get so far in obtaining ultimate power. With this book, Donald Critchlow has made an important contribution to this process.