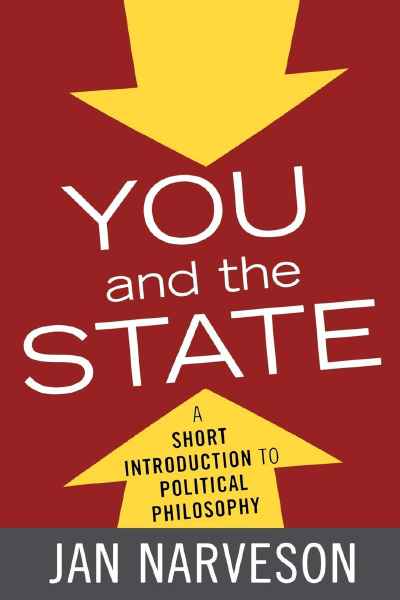 You and the State
A Fairly Brief Introduction to Political Philosophy
Jan Narveson
Kindle Hardcover Paperback
This book review appeared in the Fall 2009 issue of The Independent Review.

Since the Western tradition of political philosophy first took root in ancient Greece, it has grappled with three overarching questions: What, if anything, justifies the government’s existence? Assuming that government can be justified or is simply found to be inevitable, what form should it take? And what should the government do?

Most contemporary political philosophers spend relatively little time on the first question. In part, this neglect reflects the remnants of the Aristotelian belief that human beings are by nature political animals. More often, though, political philosophers deem it patently obvious that the state is necessary to ensure social order and justice, regarding the issue as having been settled by Thomas Hobbes four centuries ago. Today’s leading political thinkers give the second question more thought, but only to anoint democracy as the best regime unanimously. Debate tends to revolve only around what sorts of institutions and practices are needed to realize an authentic democracy. Thus, contemporary political theorists expend much of their energy in dealing with the third question, which involves the appropriate role of government in social affairs and individual lives.

Jan Narveson’s most recent book, You and the State: A Fairly Brief Introduction to Political Philosophy, has the virtue of paying due attention to all three of the big questions, treating them in an accessible and engaging manner well suited to anyone exploring the subject for the first time. Those already familiar with the writings of the University of Waterloo professor emeritus will not be surprised to find him eschewing the neutral pose that some might regard as demanded by the introductory genre and instead vigorously advocating libertarianism. His defense of that stance is not immune to a protest or two. On the whole, however, he makes his case ably.

Political philosophy seeks to clarify how things ought to be rather than how things actually are. In dealing with values rather than facts, the discipline immediately raises doubts about its ability to do anything more than give voice to its practitioners’ subjective preferences. Making the study all the more problematic is that we live in an era when the scientific observation of facts is considered the measure of objective knowledge. Not helping either is the widespread acceptance of the claim that “ought” cannot logically be derived from “is.” Within the first few pages, however, Narveson confronts the challenge posed by the so-called naturalistic fallacy, rightly pointing out that value judgments can legitimately be derived as conclusions so long as they are derived from other value judgments initially established as premises. Political philosophy, then, becomes the task of identifying the foundational value premises to which people can plausibly assent and then elaborating the implications of these premises with respect to the varying challenges of political life.

When one is gauging the state’s legitimacy as an institution, the value that most needs initial clarification is the nature of justice. Political authority, after all, can hardly be justified if the state does not advance the cause of justice in any way. Narveson accordingly invokes three alternative conceptions of justice, each represented by a character in Plato’s The Republic. Thrasymachus adopts the hard-headed, realist view that justice is nothing more than the interests of the strong. In this view, the state is a tool by which powerful individuals and groups implement laws that systematically exploit the powerless. Glaucon, meanwhile, understands justice as an agreement among individuals who, overtaken by their vulnerability to violence and theft in an anarchic condition, determine that their interests are furthered most effectively by respecting the persons and goods of others. Then there is Socrates, who holds that justice is a harmony of the soul in which an individual’s reason commands his passions.

The definition posed by Thrasymachus lends support to the existence of the state, especially if it is a tyranny and one happens to be the tyrant. After all, if there is no common good to which justice obliges us to adhere, why not maximize one’s own good by securing absolute power? This might-is-right philosophy may be answered by insisting that the political exploitation of others, no matter how personally advantageous it may appear to be, is inconsistent with leading an objectively good life, which is precisely what Socrates claims with his conception of justice. As Narveson observes, the Socratic view forms the basis for political teachings that envision government as justified in enforcing a particular vision of the good. Narveson places such approaches under the general heading of conservatism and proceeds to identify Marxism, socialism, fascism, and theocracy as species of this worldview. One wishes that Narveson had consistently substituted the term guardianship for conservatism in framing this categorization, as he does occasionally, because associating conservatism with the likes of socialism and theocracy blurs vital distinctions. Whatever one wants to call these ideologies, Narveson rejects the ideologies themselves, arguing that reason cannot adjudicate between rival perspectives of human flourishing. That move leaves the prospect of answering Thrasymachus only by maintaining that nobody can generally be expected to get away with exploiting others.

This conclusion is underlined in the social contract that Narveson constructs in sympathy with Glaucon’s definition of justice. Though we cannot agree on how best to live, none of us wants to be harmed by others. At the same time, each of us is equally vulnerable to such harm. Thus, as Narveson writes, “we can ‘agree to disagree’ in the sense that we can simply agree to let each other do as he or she prefers, provided only that this is confined to what has either no effect on me, or none that matter, or at least no adverse effects” (p. 86, emphasis in original). In this way, the social contract provides the foundational value premise necessary to develop a political philosophy that can withstand the test of reason. From the freedom to pursue our subjective conceptions of happiness, one can derive the notion of self-ownership, which is then translatable into ownership rights over parts of the world acquired voluntarily or which no one previously held. Given this logic, according to Narveson, the minimal state espoused by classical liberals can be justified, but the regulatory welfare state backed by present-day liberals cannot be. To go beyond the provision of national defense and a system of justice that protects individuals against violence, theft, and fraud is to contravene the principles of mutual advantage and self-ownership that underlie the social contract, for the regulatory welfare state, in furnishing its vast menu of social services, inevitably coerces individuals against their values and interests.

Narveson’s argument begins to break down somewhat in his analysis of democracy. He is admirably clear-sighted about democracy’s defects, noting that its operation does not adequately reflect voter preferences and that politicians can readily exploit its mechanisms to extract resources from the general public and unpopular groups for transfer to favored coalitions and special interests. The problem is that such transfers weaken people’s obligation to stick to the terms of Narveson’s social contract. If our allegiance to the contract is contingent on our interests, what stops a person from uniting with others and using their joint influence and votes to divert benefits to themselves at the expense of others once democracy is on the scene to facilitate such transfers? Thrasymachus rears his ugly head again. It might be countered in truth that we all are equally vulnerable to such rent seeking, and so each of us ultimately has an interest in not encouraging the process. Yet if the history of Western democracies over the past century is any guide, the temptation to free-ride is very powerful, and once a fair number has already done so, the logic of joining in becomes compelling. Other forms of government are no more promising; as Narveson indicates, monarchy and aristocracy merely change the number of decision makers—one or a few, respectively, as opposed to many—to whose illicit coercion we are subject. So we are stuck with democracy, if only because it is now so widely supported.

Or are we? In the final chapter, Narveson invites us to consider seriously a society with no government. Given the Thrasymachean dilemma, Narveson’s vision of a private-property anarchy is enticing. Yet the fact that, apart from small communities, governments have almost always existed suggests either that a coercive agency is necessary to solve coordination problems in large societies or that the provision of protection services is a natural monopoly or that human nature is such that some people will always secure the power that comes from heading a state. Narveson does not assist his case by invoking Somalia as an example of an anarchic society, given the suffering in that African nation. Nevertheless, in encouraging us to think about anarchy, he usefully frames an ideal of a purely voluntary society by which we can evaluate and improve existing conditions.