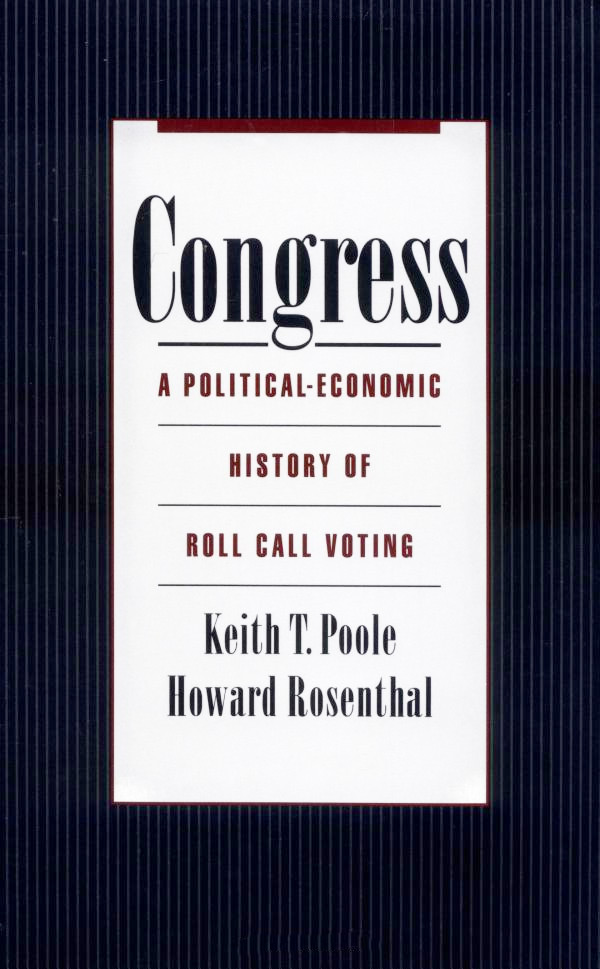 This is the most important book on Congress written in the 1990s. Its presentation is flawed. I am not even sure it is a “good book” in the usual sense. But in terms of lasting importance, Keith Poole and Howard Rosenthal’s Congress is a landmark.

In general, Pool and Rosenthal argue that the classical spatial model of politics doesn’t explain real-world political conflict very well. The theory that voters weigh candidates’ positions on many issues before choosing a candidate imposes unrealistic (and unnecessary) costs of information and search on voters. Somehow, issues get bundled and simplified. In Poole and Rosenthal’s view, the bundling is achieved primarily through the competition among political parties.

That claim leads immediately to an apparently fatal problem (as I myself have often been told by my colleagues in political psychology): we have known for thirty-five years that individual belief systems are not consistent and are not constrained in the sense of obeying a set of ideological precepts (Phillip Converse, “The Nature of Belief Systems in Mass Publics,” in Ideology and Discontent, ed. David Apter [New York: Free Press, 1964]). How can a simple “ideological” space describe political conflict if voters are not “ideological”?

The answer, it seems to me, has three parts. First, in terms of spatial theory, the answer is that constraint is imposed on voters by the institutions of aggregation, such as parties in competitive elections and a legislature in which a few parties elaborate a consistent and coherent message. “Constraint,” in this sense, is imposed on voters, so that politics is ideological even if voters are not explicitly so. The intellectual history of this first step, as presented by Poole and Rosenthal, is interesting and important. The first person to argue formally that there are multiple spaces, including a complex multidimensional world of policy and a simplified “basic space” of politics, was Peter Ordeshook (“The Spatial Theory of Elections: A Review and Critique,” in Party Identification and Beyond, ed. Ian Budge, Ivor Crewe, and Dennis Farlie [New York: Wiley, 1976]). That insight was developed further, with an explicit mechanism for moving from the politics to the policy, and vice versa, in later publications (Lawrence Cahoon, Melvin Hinich, and Peter Ordeshook, “A Statistical Multidimensional Scaling Method Based on the Spatial Theory of Voting,” in Graphical Representations of Multivariate Data, ed. P. C. Wang [New York: Academic Press, 1978]; and Melvin Hinich and Walker Pollard, “A New Approach to the Spatial Theory of Electoral Competition,” American Journal of Political Science 25 [1981]: 323–41).

The second part of the answer, which is almost completely ignored in Congress, is that, though people may not be coherently ideological, ideologies shape the way we think about almost everything in social life. There is a growing consensus among a variety of authors that ideological constraint, imposed or otherwise, sharply circumscribes how citizens conceive of the choices available to the polity. Leaving aside my own favorite source (Melvin Hinich and Michael Munger, Ideology and the Theory of Political Choice [Ann Arbor: University of Michigan Press, 1994]), consider three other important perspectives.

If such claims are correct, then much of the theorizing about politics coming out of the rational-choice and political-psychology schools is ill directed. Poole and Rosenthal in particular fall into the trap of restricting their consideration of ideology to an elite-level phenomenon. But even though the “constraint” may originate at that level, it is at the mass level that ideologies play their most important role as organizing principles. Poole and Rosenthal ignore the entire literature on this question.

The third step in the argument is empirical testing. In particular, does the notion of a “basic space” with only one, two, or three primary dimensions of conflict really tell us anything about the history of the political economy? After reading this book, no one could argue otherwise. The method, though it has been criticized on technical grounds (see, for example, James Heckman and James Snyder, Jr., “Linear Probability Models of the Demand for Attributes with an Empirical Application to Estimating the Preferences of Legislators,” Rand Journal of Economics 28 [1997]: 142–58), clearly produces a measure of the organization of political conflict and depicts the placement of the actors in that conflict. The data represent by far the most ambitious effort to map the history of politics in any nation.

Further, because Poole and Rosenthal have a legitimate theory (the political space is consistently much smaller than the policy space, but the dimensions of the political space are strategically manipulable), their exploration of the data amounts to more than just a long story. Poole and Rosenthal really have something to teach us. It is useful to consider three main points: (1) the mechanics of dimensional conflict and the fit of the model, (2) the dynamics of regional conflict and factional discord, and (3) the appropriate way to model roll-call votes.

Mechanics. The statistical machinery (developed jointly by Poole and Rosenthal in a series of papers stretching back two decades) does two things. First, it creates a space of political conflict, using a multidimensional scaling algorithm. The dimensions of the space are latent, in the sense that, by construction, whatever structure is present in the clustering of issues that divide the major parties constitutes the first dimension. Second, the legislators are located in that space, using the voting pattern that each exhibited on the issues that went into the creation of the aggregate space.

It is tempting to name the dimensions of conflict something such as “economics” or “social policy” or “values,” but that is generally a bad idea. It is possible that the primary dimension of political conflict coincides neatly with some identifiable “issue,” but in general it need not do so. For example, in the 1840s the main issue became extension of slavery to the territories, but the real dimension of conflict was the status of slavery itself. Poole and Rosenthal identify the primary dimension in that era as “race,” which seems safe enough. But in other periods the primary dimension recovered through the statistical procedure is simply the way of clustering issues that provides the best fit, given the presumed total number of dimensions.

Intra-party disagreement. The second dimension of conflict (when one exists; often the primary dimension explains most of the political differences in roll-call voting), again only a product of the statistical machinery Poole and Rosenthal apply, measures the extent of disagreement within parties. If the two parties are perfectly cohesive, then political conflict will always be one-dimensional, because two points determine a line in a space of any dimension from two to infinity. But if the parties form “clouds” in policy space, with individual members differing on some issues, then the “correct” number of dimensions becomes an empirical issue.

Producing an accurate empirical measure of the number of dimensions of political conflict in Congress, from the beginning to the present, may be Poole and Rosenthal’s greatest achievement. Astonishingly, there have been at most two dimensions, and generally just one, over the course of two centuries! Establishing that empirical regularity is a genuine scientific advance, on a par with breakthroughs in the measurement of physical or biological phenomena in the hard sciences.

Modeling Roll Calls. According to a principal-agent perspective, individual votes reflect the interests of the constituents, efforts by organized interests, or responses to certain informational cues. Poole and Rosenthal reject that view, resting their own interpretation on the centrality of legislator ideology and on evidence that measures of constituency interest perform surprisingly poorly. In the public-choice literature, James Kau and Paul Rubin first advanced that argument (“Self-interest, Ideology, and Logrolling in Congressional Voting,” Journal of Law and Economics 21 [1979]: 365–84), and many others have done so subsequently. But Poole and Rosenthal’s argument goes further: Over time, voting follows a pattern determined by the ideological position of the legislator on at most two recovered dimensions. Once those ideological influences are taken into account, all other ostensible independent variables are irrelevant, except in unusual circumstances. I have been on the other side of this debate at times, but it would appear that Poole and Rosenthal have won a major victory here. Because their nominate scores are available in easily merged, machine-readable format, everyone has access to the measures. It is now established that no better measure of ideology exists, and the publication of Congress should lay to rest the lingering belief that other measures, such as “interest-group ratings” (e.g., ADA scores), are valid substitutes for ideological variables.

It may seem that some of the criticisms offered at the beginning of my review are too harsh if I really think so highly of the book. But my criticisms are harsh precisely because I think so much of the accomplishments reported in Congress but fear they may go unrecognized because of flaws that could have been avoided. Although some readers may dismiss Congress as a technical measurement exercise in the rational-choice tradition, of interest to students of American history but not really of central importance to the discipline of political science, it deserves to be seen as a turning point in the evolution of that discipline.