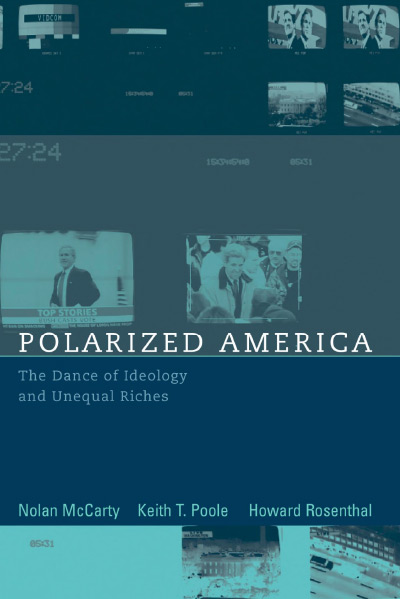 Polarized America
The Dance of Ideology and Unequal Riches
By Nolan McCarty, Keith T. Poole, and Howard Rosenthal
Hardcover Paperback
This book review appeared in the Spring 2008 issue of The Independent Review.

Polarized America, by Nolan McCarty, Keith T. Poole, and Howard Rosenthal, begins with an empirical observation: since 1975, income inequality and political polarization have risen simultaneously. This simultaneity, they argue, is not coincidental. On the contrary, increased income inequality has driven political polarization. Unless you typically find yourself in deep agreement with the editors of the New York Times, you will likely bristle when you first confront this argument, as I did. But one needs to read no more than a few pages of the book before thinking that maybe McCarty, Poole, and Rosenthal are onto something. By the end of this important and thought-provoking book, even the most ardent skeptic will have to concede that the authors have made a compelling and rigorous case.

In chapter 1, the authors describe the evolution of income inequality and political polarization during the twentieth and early twentieth-first centuries. To measure political polarization in the House and Senate, they use the difference between the average NOMINATE scores of Republican and Democratic legislators. (Based on an exhaustive analysis of roll-call votes, NOMINATE scores indicate where a given legislator lies on a liberal-conservative spectrum.) Three different measures of income inequality are considered: the proportion of income going to the top 1 percent of all income earners; the Gini coefficient; and the proportion of the U.S. population that is foreign born. In 1970, the majority of foreign-born residents were citizens and did not differ substantially from native-born residents in their economic status; by 2000, however, the vast majority of the foreign born were not citizens, and they were much less wealthy than the native born. All three measures of inequality exhibit a sharp break in trend around 1975, when they all begin to trend sharply upward. Measures of income inequality and political polarization move together and are highly correlated. (The correlation coefficient on polarization and the Gini variable is 0.92, for example.)

In chapter 2, the authors evaluate possible explanations (other than income inequality) for the observed increase in political polarization. These explanations include the Southern Realignment, in which southern politicians abandoned the Democratic Party in favor of the Republican; partisan congressional reforms; redistricting; and the intraparty competition during primaries. McCarty, Poole, and Rosenthal demonstrate, though, that these explanations cannot account for increased polarization in American politics. Southern Realignment is not a viable reason because one can observe as much polarization in the North, where no realignment has occurred. As for partisan congressional reforms, it is often claimed that after Watergate a variety of institutional changes strengthened and centralized the control of the majority party. Using statistical tests, the authors show that polarization would have been largely unaltered even without these changes. They reject redistricting as a reason in part because polarization has been as extreme in the Senate (which has not been subjected to any redistricting) as in the House. And they show that interstate variation in primary processes does not generate statistically significant differences in the extremism of elected legislators.

Chapter 3 and parts of chapter 2 focus on the relationship between constituency income and legislative behavior. The most important finding here is that since 1975 legislators have become increasingly responsive to their constituents’ income-based preferences. Put another way, constituency income has become an increasingly important variable in explaining legislators’ voting. Furthermore, McCarty, Poole, and Rosenthal run a series of tests in which they regress a voter’s party identification against income, sex, education, race, church attendance, and so on. Again, they find that the coefficient on income has increased over time. In unraveling the complex relationship between income and politics, they also strike two blows against conventional wisdom. It is often argued that conservative Christians and social conservatives vote against their economic interest; in fact, however, the data in Polarized America suggest that the gradient between party identification and income is steeper for social conservatives than for the general population (see, for example, p. 100). Along the same lines, the authors show that the now-hackneyed observation that blue states are richer than red states rests on an ecological fallacy. Microdata and county data reveal a strong, positive correlation between income and voting for Republican candidates.

Chapter 4 begins with a puzzle. In democracies, rapid increases in income inequality typically manifest themselves in an expansion of the welfare state. The reason for this outcome is simple: when the median voter sees his economic position falling relative to wealthier individuals, he demands policies that redistribute income and wealth downward. Why didn’t such redistribution happen in the United States? The answer, the authors argue, is that the median voter’s income is much higher than and has not fallen as much as the median nonvoter’s income. Furthermore, the bottom of the U.S. income distribution today consists in large part of relatively poor immigrants who are not citizens and have no voting rights. In addition, the recent rise in income inequality has occurred along with an explosion of immigration from relatively poor countries: between 1970 and 2000, the proportion of the U.S. population that is foreign born nearly doubled. The growing importance of poor, non-voting immigrants helps to explain why the political polarization documented by McCarty, Poole, and Rosenthal has been asymmetric: NOMINATE scores indicate that Republican legislators have moved far to the right over the past three decades, whereas Democrats have moved only modestly to the left.

Chapter 5 explores the linkages between campaign finance and political polarization. McCarty, Poole, and Rosenthal are especially interested in the possibility that campaign contributions are coming increasingly from the most ideologically extreme donors and interest groups. If so, this change, rather than the rise in income inequality, might explain the increased level of political polarization in Congress. To test this proposition, the authors exploit a simple testable implication: if campaign donors are interested in affecting specific votes, they should be donating to legislators on both sides of the aisle and those toward the middle of ideological distribution (that is, those most likely to be swing voters). If, however, donors want to promote an extreme, unpopular policy, they should be donating to like-minded legislators on the fringes of the ideological spectrum. Although much evidence suggests that extreme interest groups do donate heavily to the political process, the authors demonstrate that donations from these extreme groups have not increased over time.

Throughout Polarized America, McCarty, Poole, and Rosenthal suggest that legislative intervention could have helped to mitigate some of the rise in income inequality and that the increasingly polarized legislative environment prevented this mitigation. In chapter 6, they provide suggestive evidence on this score. Plotting time trends in the real value of the minimum wage, welfare benefits, tax rates on the highest income earners, estate-tax rates, and the minimum value at which an estate can be taxed, they argue that the time series of these variables are at least broadly consistent with their larger argument. On this score, I am not so convinced. The real value of the federal minimum wage has declined over the past few decades, but the sources of that decline are unclear. Perhaps legislators have backed away from increasing the federal minimum wage because state laws are more aggressive or because of the economic evidence that significant hikes in the minimum wage can actually increase unemployment among the poor. The tax rate on estates and the minimum value at which an estate can be taxed appear to have risen steadily since the mid-1970s (see figure 6.2, p. 170). Tax rates on the wealthiest individuals began to fall in the late 1960s, before the polarization of Congress. Nevertheless, the authors’ evidence that polarization has produced political gridlock and slowed legislative production (measured as laws passed) is very strong.

My quibbles with chapter 6 aside, McCarty, Poole, and Rosenthal have written a bold and important book. Whether one agrees or disagrees with their central argument—and it is difficult to imagine anyone’s being entirely agnostic—the rigor of their empirical analysis and the broader significance of their thesis make this book a model of scholarship. Economists, historians, and political scientists will find the book of greatest interest, but it also merits the widest possible readership.