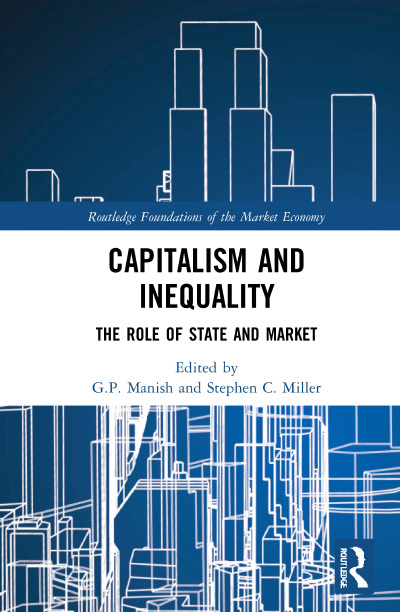 Capitalism and Inequality
The Role of State and Market
Edited by G.P. Manish and Stephen C. Miller
Kindle Hardcover
This book review is a web exclusive for the Winter 2021/22 issue of The Independent Review.

A little over a century ago, John D. Rockefeller became the world’s first billionaire (with a net worth over $25 billion in today’s dollars). The press was captivated by him (see Ron Chernow’s brilliant Titan: The Life of John D. Rockefeller, Sr., New York: Vintage, 1998). People loved the fact that Rockefeller found ways to reduce refining costs for kerosene and later gasoline—and perhaps also noticed his immense generosity to higher education and the medical and scientific breakthroughs his foundations enabled. But his very wealth seemed like a threat to society. And they were of two minds about the other tycoons of the age from Andrew Carnegie to J.P. Morgan to Henry Ford, as well.

Today Forbes lists nine Americans (and one Frenchman) who have a net worth over $100 billion. Almost everyone has heard of them—Musk, Bezos, Gates, Ellison, Page, Zuckerberg, Brin, Ballmer, and Buffet—and the press is again captivated by them because they demand attention. Their companies have changed our lives and they get to “live large” (even escaping the earth’s gravity on occasion). It is now common to speculate who will be the world’s first trillionaire (although my version of spell-check doesn’t yet recognize this word).

These soaring wealth levels and the privileges they secure have helped shift the attention of policy makers and economists to inequality. A generation ago, economists usually began discussions of inequality by explaining that because our markets are generally competitive, the payments to workers and owners of capital are generally in line with the value of the marginal product of their contributions to production. If you are more productive and people demand the goods and services you help make, you will earn more. The whole thing seems rather fair to most observers. If you want to earn more, go out and gain the skills that are in demand and work hard. The system encourages everyone to do this, yielding immense gains to people both as consumers and as producers.

However, the narrative shifted with the financial crisis of 2008, massive bailouts of the financial sector, and the publication of Thomas Piketty’s Capital in the Twenty-first Century (Boston: Harvard University Press, 2014) and works like Joseph Stiglitz’s The Price of Inequality: How Today’s Divided Society Endangers Our Future (New York: Norton, 2012). Piketty maintains that when the rate of return on investments in capital and wealth exceeds the rate of growth of output and wages, which he sees as the historical norm, the concentration of wealth will rise unchecked. Stiglitz adds that the wealthy use their influence to control the political process and warp the rules of the game to maintain and enhance their status. G.P. Manish and Stephen Miller argue that this new narrative has come to dominate public discourse on inequality and the collection of papers they have edited in this volume aims to scrutinize the new narrative. Almost all of the authors have published in The Independent Review in the past decade, so they won’t be new to our readers.

Although every chapter is worth reading, two chapters stand out as very important contributions to the literature: “Government and the Economic History of American Inequality” by Vincent Geloso and “The Economic History of Taxation and Inequality in the United States” by Phillip Magness. Before examining them, I present brief summaries of some of the other chapters.

Randall Holcombe largely supports Stiglitz’s narrative, arguing that the 1% have captured American political institutions and that this cronyism is fairly inevitable. Donald Boudreaux counters claims that globalization has created as many losers as winners. He argues that this suggestion relies on a static view of the economy and undercuts the contention as fundamentally misguided: “Saying that trade with foreigners creates losers is akin to saying that trade with women creates losers” (p. 28). The focus on trade is misplaced: “any country in which freer trade would...result in greater income inequality is a country in which any market-driven changes in the pattern of production would result in greater income inequality” (p. 36), but it is this competition that creates only winners in the long haul. Peter Boettke, Rosolino Candela and Kaitlyn Woltz argue that the older neoclassical view of the income determination ignores uncertainty and entrepreneurship. Justice according to this neoclassical view is defined in terms of market outcomes that approximate the marginal valuation of the productive contribution of each factor of production. But, they argue, “the justice of the market process and the pattern of income distribution that it engenders” actually arises from the “fact that it allows and protects the possibility for the discovery of wealth where it did not previously exist in the minds of other individuals” (p. 51, emphasis in the original). They reprimand Piketty for making it “appear that a return on capital is a passive activity devoid of any active entrepreneurial discovery” (p. 53). Steven Horwitz builds on his article (with Vincent Geloso) in The Independent Review, “Inequality: First, Do No Harm” (2017, 22: 121-34). Perhaps his most important point is that inequality isn’t most people’s primary concern. We care much more about fairness than inequality. The traditional classical liberal concern about equality before the law needs to be reemphasized and reinvigorated as meaning that no person or group has specific privileges and no person or group has specific restrictions on their freedoms.

Now to the two chapters that cement the volume’s importance. Vincent Geloso’s insightful chapter dismantles the narrative, pushed by Piketty and Emmanuel Saez that American inequality has followed a U-curve path—high in the early twentieth century, low in the middle period from the Great Depression to the 1970s, and rising strongly since then. Pulling together a wide range of published studies (some of which he has written), he exposes the weak foundations of standard inequality measures, arguing that widely-cited statistics overestimate the recent rise in inequality—and overestimate the decline in the middle part of the century. He shows that problems with price indexes bias the trends, but his most critical points are that 1) “prior to 1986, the difference between the corporate and personal income tax rates meant that individuals had the incentive to report personal income as corporate income. After the tax reforms of 1986...which reversed this situation, individuals shifted incomes between the corporate and personal accounts in the opposite direction” (p. 111); 2) that standard series fail to adjust for the growth in household sizes among the rich relative to the poor; and 3) the need to look at total compensation—not merely monetary compensation. After these adjustments have been made, it is not surprising that measured inequality in consumption—probably a truer measure of inequality—has not risen since the 1960s and is well below standard measures of income inequality. The chapter closes by examining how government policies have magnified inequality in recent decades. I recommend this chapter to anyone who needs a quick primer on inequality trends in the U.S. Mine it when revising your lecture notes on the subject.

Phillip Magness’s chapter is an excellent complement to Geloso’s. Magness documents changes in the tax code during the twentieth century and explains that studies, like those from Piketty and his co-authors, relying on IRS tax data cannot tell us much about the trend in inequality—because the wealthy have reported more income when tax rates were low and less income when they were high. Those who suggest that high historical marginal tax rates are good policy miss the fact, which Magness documents, that the typical millionaire rarely paid the top marginal tax rate—which reached 90 percent in the 1940s and 50s, and remained at 70 percent until the early 1980s. Their average tax rates were below 50 percent, due to tax sheltering devices. After examining a wide range of income and wealth statistics, he concludes: “The cumulative effect of these historical insights suggests that we should no longer expect a pronounced century-long U-curve [in inequality] for the United States but a substantially flatter pattern—perhaps resembling a tea saucer with much more subdued movements on both ends of the century.... The strong correlation between tax liability and the tax-derived distributional series further suggests a circularity to the causal argument behind using incomes taxes as an inequality-alleviation device. Piketty et al. have essentially constructed an argument where an empirical product of their preferred policy simultaneously justifies its own implementation and validates its own effectiveness when implemented” (p. 205).