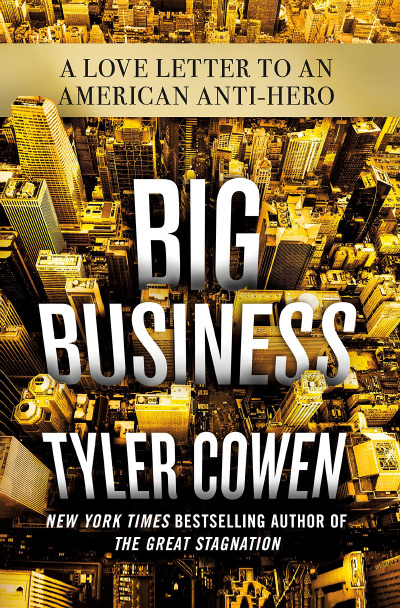 Big Business
A Love Letter to an American Anti-Hero
Tyler Cowen
Kindle Hardcover Paperback Audiobook Audio CD
This book review is a web exclusive for the Fall 2019 issue of The Independent Review.

At least three things set Tyler Cowen apart as a writer and social critic. First, like any good writer, he tries to understand the big picture, but Cowen knows that to see the big picture you also need to master and muster a lot of little details—and not just those in your area of expertise. Second, he’s almost annoyingly non-partisan and detached. Third, he’s not embarrassed to like humble things that other intellectuals disdain.

One of those humble things scorned by so many intellectuals is business, especially big business. Business is underrated and the purpose of this book is to demonstrate and explain why this is so. Cowen’s fundamental point is that corporations do their job well—exceptionally well. They give us what we actually want: “The two words that follow most immediately from the world of business are ‘prosperity’ and ‘opportunity’” (p. 1). Many (most?) have noticed the “prosperity,” fewer the “opportunity”—the jobs that allow us to be productive, creative, cooperative, caring, people—better people. “‘Meeting payroll’ . . . is nothing less than a heroic act” (p. 2). Moreover, business is just getting started. Nowadays we even turn to it to find dates. Soon it will drive our cars, better than we do.

In the mistitled (see my final paragraph) Big Business: A Love Letter to an American Anti-Hero, Cowen admits that there are many problems with big business. But one of his basic insights is that they’re mainly the same problems that plague all human beings, and that businesses usually solve these problems better than the rest of us. This argument is capably made in a chapter which asks “Are Businesses More Fraudulent Than the Rest of Us?” Yes, he admits, there have been some outrageous frauds by very large businesses (Exhibit A may be Volkswagen’s ingenious pollution emissions cheating scheme) and entire business sectors are based on deceit. But, as individuals we (but probably not you) often do things like lying on dating profiles and resumes, cheating on taxes, and being dishonest with our closest friends and family members. Does business lie more than non-profits (many of which are scams) or government? Not really, concludes Cowen. The bottom line is that acting trustworthy pays off a lot in the business world and to become successful most businesses must be trustworthy. When I fill up my tank at the gasoline station, things always work as advertised. I haven’t yet been ripped off when I give my credit card information to Amazon.

Are CEOs paid too much? Cowen points out that CEO pay has risen in parallel with the market capitalization of the corporations they manage, ably explains the incredible (and rare) skill set that a successful CEO must possess, plausibly argues that American businesses are the best managed in the world, and makes a convincing case that CEOs are underpaid.

Cowen easily bats aside the idea that work isn’t “fun.” It’s more than fun—it’s rewarding and good for you. There are huge costs to unemployment in terms of both physical and mental health. Stress levels are higher at home than on the job. In fact, Cowen has moved away from supporting the idea of a basic income guarantee (see The Independent Review’s symposium on this in the Spring 2015 issue) because work is so meaningful to people’s lives.

How monopolistic is big business? Not very, in Cowen’s perceptive assessment. Standard measures of industrial concentration may be rising, but common sense shows expanding choice in almost every market (exceptions are airlines, cell phone service, and health care). I especially like the insight that access to the internet, Facebook, and all those apps are substitutes for many leisure activities, reducing market power in numerous industries.

I’m hesitant to admit that I’m not as much of a fan of big business, especially big tech, as Cowen (though I am a fan). I can gush about Walmart, even though I rarely shop there, because they have pushed the places where I shop to cut their prices—and are especially beneficial to poorer buyers. (My biggest beef against them is that they haven’t built a store closer to my home.) But Cowen’s chapter on big tech is somewhat of a disappointment, especially his claim that big tech companies “have brought human beings into closer contact with each other than ever before, whether emotionally or intellectually, mostly through social media” (p. 100). This assertion sounds ludicrous to me—especially in light of what I hear from my children who came of age during the internet era and academic reports of high levels of loneliness in the American population. (A close friend snorted out loud when hearing Cowen’s statement.) If social media makes us closer emotionally, why have marriage rates fallen? Or is “emotional closeness” just a lame synonym for easy hookups? Instead, Facebook seems to have undermined the mental health of some users. Hunt Allcott, Luca Braghieri, Sarah Eichmeyer, and Matthew Gentzkow (“The Welfare Effects of Social Media,” NBER Working Paper No. 25514, 2019), randomly assigned a subset of volunteers to deactivate their Facebook accounts in a way that was verified. They found that Facebook deactivation discernibly increased subjective well-being (and caused a large persistent reduction in Facebook use after the experiment). Cowen admits worries about the banality of Facebook, pinning the blame on users—after all, Facebook is merely giving them what they want. When credible evidence of political bias in Google searches arises, however, the problem is much deeper—since this isn’t what its users want and not what Google purports to deliver.

The strongest chapter of Big Business may be “What Is Wall Street Good for Anyway?” It is hard to imagine sustained economic growth without the banking and finance industry. In Cowen’s telling, Americans save little but get high rates of return due to the financial industry—and we’re able to run endless trade deficits without getting owned by the rest of the world because we take risks and get high rates of return on our overseas investments, while they get low rates of return on their safer American investments. This discussion does a wonderful job of thinking about the system as a whole, arguing that our financial system has allowed the Pax Americana, which has helped spread peace and prosperity globally. Next, he points out that big business doesn’t call the shots in Washington. Its agenda includes fiscal responsibility, free trade, predictable government, and higher immigration—which isn’t what politicians have delivered. The government spends the vast majority of tax dollars giving out entitlement benefits. The subsidies thrown to businesses are usually table scraps in comparison.

Cowen turns many standard ideas on their heads. While other economists emphasize the intractable principal-agent problem in the workplace and in corporate governance, Cowen emphasizes how well corporations actually solve this problem, especially by building up team spirit or “cooperative fervor” (p. 32). While others worry about cronyism, he downplays it and suggests that the lack of cronyism within American firms is one of the keys to their success. He’ll throw in lines like “there’s a lot to be said for inauthenticity” (p. 73) and “it is often short-termism that is underrated” (p. 60), explaining that thinking twenty years ahead is expensive and usually silly, since markets will change so much in the interim.

If big business gives us what we want, why do so many hate it? Cowen’s unexpected final chapter argues that this is because we are hard-wired to personify everything—pets, cars, the weather, even sporks. We want to personify businesses and make them our friends. But friends usually don’t make a lot of trades with each other. Friendship is about togetherness, which doesn’t work if someone is paid to do so. Friendship is about putting the other person first, which business can pretend to do but cannot accomplish. Cowen pushes us to be more realistic about what business can do.

This conclusion is deeply ironic since the book purports to be a “love letter” to someone who cannot be deserving of love. In fact, it’s not a love letter, but rather a fan letter. (Perhaps, there’s “a lot to be said for inauthenticity” —especially when it comes to marketing books and choosing their titles?) Labeling it a “love letter,” would render Cowen promiscuous (or is it adulterous?) since the letter is addressed to so many businesses. Seen as a fan letter, the book works much better. Cowen, a huge NBA fan, realizes that his hardwood heroes are supposed to be great at basketball. It’s OK to admire them from afar and not an affront if they cannot be your actual friends, as long as they can drain three-pointers. Likewise, with his business anti-heroes.