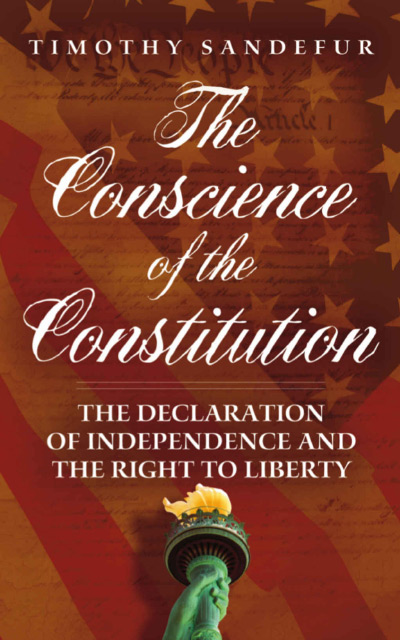 The Conscience of the Constitution
The Declaration of Independence and the Right to Liberty
Timothy Sandefur
Kindle Hardcover Paperback Audiobook
This book review appeared in the Winter 2014/15 issue of The Independent Review.

Even before the Constitution was ratified, essayists such as Alexander Hamilton, John Jay, James Madison, and George Clinton had picked up quills, dipped them into inkwells, and penned constitutional commentary on parchment. Shortly afterward, these constitutional writings—Federalists’ and Antifederalists’ opinions—were published in broadsides and in contemporary newspapers. The ink on the Constitution had barely dried when Americans raised questions pertaining to originalism and the Constitution’s meaning.

Scholars are currently interested in constitutional originalism because many have questioned the constitutionality of recent legislation, including the Affordable Care Act of 2010 and the political profiling of certain organizations by the Internal Revenue Service. So how does one determine the constitutionality of such legislation and actions or learn the original intent of the framers and the meaning of the Constitution? Sandefur argues that the primary answer is in the Declaration of Independence and the natural-rights theory that informed its drafting and approval. “[The Declaration]. . . must guide our understanding of our political and legal institutions” (p. 2). It is in this document and the Constitution, Sandefur continues, that Americans learn that “all people are naturally born free, and may use that freedom to create a political and legal order that respects and protects their rights” (p. 2).

In making his case, Sandefur stresses that “liberty and order are profoundly interrelated” (p. 1). Many Americans, however, erroneously believe they are in opposition. And at times, the latter is true; too much order can actually produce tyranny, and freedom without any rules can be anarchy. Sandefur challenges what he considers a modern understanding that liberty arises out of order. Au contraire, he writes, for “liberty comes first, and order arises from it” (p. 4). He also is worried thatmodern-day Americans, unlike the Founders, are more concerned with the majority (democracy) than with individual freedom.

Leaving aside Sandefur’s explanation of substantive due process, I focus here on two parts of his work that gave me pause: an active judiciary and the deemphasizing of federalism’s importance during the founding and early-republic eras.

Although Sandefur correctly identifies a real threat to liberty—the expansive tendencies of government, especially since the Progressive Era—his recommendations in chapters 3–5, I fear, may inadvertently contribute to the centralizing state that he hopes to undo. Although the work uses history in chapters 1 and 2 as a foundation to build upon a strategy to secure liberty, Sandefur’s narrative does not accurately reveal the nuanced history of the founding and the early-republic eras or present a comprehensive account of those eras. His purpose, to be sure, is not to provide a complete history. Considering that he uses history to undergird his recommendations to secure liberty, however, he should have cited certain classics, such as Forrest McDonald’s Novus Ordo Seclorum: The Intellectual Origins of the Constitution (Lawrence: University of Kansas Press, 1985), or recent works, such as Pauline Maier’s Ratification: The People Debate the Constitution, 1787–1788 (New York: Simon and Schuster, 2010), or more primary sources from state ratification conventions or the Federalist/Antifederalist debates so that readers would be assured that he is familiar with various interpretations and both primary and secondary sources to present an authoritative historical narrative. Instead, his solutions are based on a history that seemingly lays the groundwork for a legal case rather than an understanding of the time as it was. I am not here promoting relativism. I am declaring that the study of history should not be based strictly on philosophical approaches and that historians should avoid selective use of sources to achieve presentist goals.

The Conscience of the Constitution overlooks—intentionally or unintentionally— intermediaries such as states, institutions, and religious denominations. These imperfect institutions have sometimes encroached on individual liberties. They have at other times checked an increasingly centralizing power and protected individual liberties. Without mediating institutions, an individual is naked and helpless before Leviathan—or the Minotaur, as political economist Bertrand de Jouvenel describes centralizing power. It is easier to suppress the liberty of an individual than the liberty of an individual who is part of an intermediate organization or a state.

Federalism is an example of an organization of intermediate bodies that can check an overly energetic government. Sandefur encourages more judicial activism that is grounded in what he considers the “conscience of the Constitution” (p. 2). He acknowledges that when enforcing constitutionality and the law, judges must “address questions of political philosophy” (p. 87). In asking for the meaning of the Constitution, however, judges cannot “do whatever they please” (p. 88). Sandefur writes, “The principles of the Constitution’s political philosophy are not left up to the judges to invent but are stated in the Declaration of Independence” (p. 88). When I read this, I wondered: Where will we find these activist judges, these oracles in the conservative/libertarian movement? One of Thomas Jefferson’s greatest concerns was the growth of the judiciary, a body he believed that was working in his time to place all great and small and foreign and domestic governmentalmatters inWashington. Sandefur’s recommendation may lead Americans to trust primarily in a few jurists to protect individual freedom. A belief in a few jurists protecting individual liberty seems almost as elitist and as antidemocratic (in the sense of being anti-individual) as the Progressives’ belief that they could run people’s lives better than the individuals could themselves. It is possible for a robust judiciary, even one oriented to the Declaration of Independence, to turn into an elitist few who unwittingly give the government more power to protect a helpless American people as an abstract whole. Maybe I am too cynical. It is plausible, indeed, that an active judiciary, with a concern to secure liberty, can act temporarily as a check on government encroachment. What will be the state of liberty, however, when an active judiciary is replaced with another set of jurists with a different philosophy?

Sandefur seems to be unaware that the Declaration of Independence was in many ways an observation of what had recently happened in the respective colonies. Indeed, expressions of independence had occurred in the colonies before the Declaration of Independence was penned. In fact, in many ways they were prerequisite. Although similar events occurred elsewhere, North Carolina is illustrative. For instance, North Carolina’s Fourth Provincial Congress passed the Halifax Resolves on April 12, 1776, by a unanimous vote (eighty-three to zero). (That date is on the current North Carolina flag, and the event was commemorated previously on the state’s license plates with the slogan “First in Freedom.”) In that document, the North Carolina legislative body empowered its Continental Congress delegates to cooperate with delegates from other colonies and, if needed, to withdraw from Great Britain. The Declaration’s antecedents thus lie at the local level.

Even at the community level, North Carolinians showcased expressions of independence before July 4, 1776. On May 31, 1775, the Mecklenburg County Committee of Safety issued the Mecklenburg Resolves, wherein the committee dissolved civil and military commissions and formed “certain Rules and Regulations for the internal Government of this County.” After the Halifax Resolves yet before the Declaration of Independence, the Vestry of St. Paul’s Church in Edenton, North Carolina, issued “The Test.” This local body fanned the flames of independence by declaring that unconstitutional parliamentary taxation should be “resisted to the utmost,” and it pledged to “maintain and support” the Continental and Provincial (North Carolina) Congresses and abide by their resolutions “because in both they are freely represented by persons chosen by themselves.”

Although government is (and has for a long time been) encroaching on individual liberty, a better understanding of our nation’s history might inform different recommendations to secure liberty. Sandefur’s solutions, I fear, may further (or at a minimum maintain) government encroachment, for it is much easier for a centralizing authority to conquer individuals than intermediaries consisting of individuals. Although Sandefur’s concerns for liberty’s protection are commendable and he has identified the primary culprit in the growing encroachment on liberty, his recommendations are built on historical sandy soil. A more comprehensive understanding of America’s past—a firmer foundation—would have prompted solutions that include federalism and intermediaries as a means to defend individual liberty.