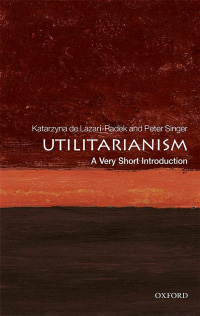 Utilitarianism
A Very Short Introduction
By Katarzyna de Lazari-Radek and Peter Singer
Kindle Paperback
This book review is a web exclusive for the Spring 2018 issue of The Independent Review.

As the authors of this compact, useful introduction to utilitarianism indicate, one of the fundamental ideas behind most forms of utilitarianism—that pleasure is the highest moral good—can be traced back to Epicurus and his followers in ancient Greece and Rome. However, the authors are more ambivalent about the contribution of Christianity to utilitarianism. On the one hand, they want to claim that utilitarianism is “the best understanding and application of the insight that underlies the Golden Rule,” so they seem to suggest that they agree with some elements of Jesus’s moral teaching (while dispensing with many other points, of course) (p. 31).

Indeed, the authors lay claim to justice, prudence, and benevolence as utilitarian principles, but they ignore the centrality of these positive virtues in traditional (Judeo-Christian) morality. Indeed, they credit the utilitarian philosopher Henry Sidgwick (who seems to be one of their favorite moral philosophers) with recognizing these three principles as self-evident rational moral principles that flow from utilitarianism. Is it possible that Sidgwick saw these as self-evident because he was raised in a culture impregnated with these Judeo-Christian values?

The authors suggest that utilitarianism is more demanding than traditional morality, because it teaches that “the right thing to do is to bring about the best consequences, where ‘best consequences’ means for all of those affected by the choice, the greatest possible net increase in the surplus of happiness over suffering” (p. xix). Utilitarianism, they insist, is more demanding than following a moral code, because, for instance, one implication of utilitarianism it is that affluent people should forgo luxuries to help the poor. Once again, isn’t it evident that traditional Judeo-Christian morality enjoins helping the poor, the sick, and the weak, even to the point that Jesus commanded a man to sell everything he had to give to the poor?

The authors also use some distorted statistics to try to prove that utilitarianism is more altruistic than other moral philosophies. They claim that a survey showed that 56% of “effective altruists” identified themselves as utilitarians. The survey they reference has two major problems that render it almost meaningless. First, the survey was aimed at a specific group that associated with organizations for which leading utilitarians recruit, so no wonder many of the respondents considered themselves utilitarians. This would be like surveying those supporting a Jewish charitable organization and finding—surprise, surprise—that most of the donors are Jews. Second, in this survey many respondents did not answer the question about what moral philosophy they upheld, so of the 2352 (not “nearly 3000,” as the authors claim) who identified as “effective altruists,” actually less than 33% identified as utilitarians.

To their credit, the authors understand and explain most of the common criticisms of utilitarianism, and they do their best to meet these objections. They are especially critical of one of the most famous utilitarians, John Stuart Mill, but they seem more appreciative of Sidgwick. Nonetheless, they admit that Sidgwick never was able to figure out why egoism is not just as self-evident as benevolence, and this troubled him, because it vitiated his analysis. Jeremy Bentham, the founder of utilitarianism faced the same problem, they admit, because while he could show that we are motivated to pursue our own pleasure, he could not show that we are similarly motivated to pursue other people’s pleasure, which is fundamental to utilitarianism.

However, they are so troubled by the possible social implications of lifting all rules and having everyone live according to act utilitarianism, that they opt for a third option: rules for the masses, but act utilitarianism for the initiated cognoscenti. In a section on “Keeping It Secret,” they affirm what they call “esoteric morality.” They even quote Sidgwick, who supported this paternalistic view, saying, “it seems expedient that the doctrine that esoteric morality is expedient should itself be kept esoteric. . . And thus a Utilitarian may reasonably desire, on Utilitarian principles, that some of his conclusions should be rejected by mankind generally” (pp. 96-97). Oops, these authors blew their cover.

One way they justify their “esoteric morality” is by arguing that “it is difficult to deny that some people do know better than others what ought to be done” (p. 94). This stance is particularly troubling, because when discussing particular moral disputes, the authors at times show considerable condescension toward those who disagree with them. For instance, when promoting the permissibility of physician-assisted suicide, the authors assert that “any thinking person” can see that the distinction between turning off a respirator and filling out a prescription to end someone’s life is “ethically irrelevant. (p. 101). I guess I (and many other people, including leading scholars) don’t qualify as a thinking person, and since one of the authors, Peter Singer, has argued extensively that any human being who is not a thinking being may be killed with impunity, I wonder if this means I have forfeited my right to life.

These authors admit that while many of the moral stances that flow from utilitarianism converge with our moral intuitions, some diverge rather radically. So what should we do when our moral intuitions conflict with what we think will promote the greatest happiness of the greatest number, that great utilitarian goal? Their answer is simple: ignore your moral intuitions. Why should we ignore them? Because, these authors assert, we need “to take into account research that shows which of our moral intuitions have evolved in circumstances that discredit them as sound guides to what we ought to do . . . [and then] disregard those intuitions” (p. 40). One problem with this is that “research” in evolutionary psychology produces all sorts of “just-so stories” about moral intuitions (and the stories often conflict), purporting to show that we are hard-wired for adultery, infanticide, divorce, and even rape.

Another problem with this view emerges when the authors provide a specific example of a moral intuition that utilitarianism tells us to ignore: incest restrictions between siblings. In their view, incest prohibitions emerged to promote evolutionary fitness, which is threatened by close inbreeding. However, now that we have contraception, such prohibitions are outmoded, they claim, so we can safely ignore our moral intuition against incest. But what if incest prohibitions are not just about avoiding passing on hereditary illnesses? What if there are harmful emotional and relational problems that incest produces? In this case, as in many others, the authors show no indication that they understand that utilitarians may not have sufficient wisdom to craft moral principles that will lead to human happiness. Just because utilitarians say something will lead to greater human happiness does not make it so.

In sum, this is a useful introduction to utilitarianism by true believers who defend their own philosophical position.