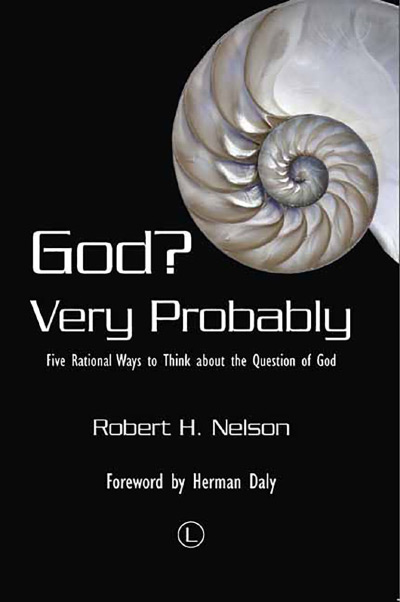 God? Very Probably
Five Rational Ways to Think about the Question of a God
By Robert H. Nelson; Foreword by Herman Daly
Kindle Hardcover Paperback
This book review appeared in the Spring 2017 issue of The Independent Review.

Robert Nelson offers us a brilliant, refreshingly written, well-informed case for theism. His book is an excellent contribution to the debate over the probability of theism, a debate that includes participants ranging from the not-so-new-anymore atheists such as Christopher Hitchens to Richard Dawkins (who currently describes himself as an agnostic who is less than 100 percent sure there is no God) and Nelson’s counterparts (for example, Richard Swinburne, who has written a series of books arguing that the probability that God exists is greater than 0.5 (philosophers sometimes identify certainty with the number 1, no credibility as 0, and 0.5 as the median), and Keith Ward, author of the book Why There Almost Certainly Is a God [2009]). In an autobiographical aside, Nelson observes: “I have benefited greatly from an outpouring of writings in recent years that have newly discussed developments in the philosophy of human consciousness, mathematics, physics, evolutionary biology, and theology that are of true theological significance—even as such recent writings and developments were not available to previous inquirers into the age-old question of the existence of a god” (p. 8). The breadth of his research is impressive indeed, and so readers will benefit from Nelson’s wide reach.

In the introduction, Nelson expertly sets the stage for his investigation. In the current intellectual climate, it is often assumed that we have a problem-free concept of the material world and a comparatively befuddled grasp of what is mental (consciousness, beliefs, feelings). As Nelson argues, this assumption is increasingly recognized as philosophically spurious. We are most keenly and primarily aware of our conscious experience, and our concept of a mind-independent world is itself the result of our mindful theorizing. “The very concept of ‘matter’ is itself a creation of the human mind” (p. 3). The introductory chapter offers a great preview of Nelson’s style of blending philosophical arguments with observations about the cultural status of the questions he is addressing.

Chapter 2 begins with a disarming line: “I have faith, dear reader, that you exist” (p. 20). This chapter continues the theme of chapter 1 that our cognitive grasp of the world of experience and thoughts is more readily available than our inferential grasp of mind-independent reality. This is a perceptive challenge to philosophers such as Paul Churchland and Daniel Dennett, who write as though we should be more certain of the reality of the scientific worldview (which is assumed to be thoroughly materialist) than of the existence of scientists who are (presumably) thinking, feeling, intentional agents who have beliefs, desires, values, and so on. As Nelson notes, “My faith in the products of natural science is in fact based partly on my own understanding of the internal workings of the scientific community” (p. 25).

In chapter 3, “God the Mathematician,” Nelson offers reasons to deny the adequacy of causal naturalism, including its failure to account for the necessity of mathematical truths. Here, he presents mathematics as supernatural in contrast to the natural, as in the natural sciences. In chapter 4, “Darwinism as Secular Fundamentalism,” we see how evolutionary biology has been and is currently tied in with philosophically spurious positions that have dangerous ethical and epistemological implications. Some form of theism, with or without evolution, is deemed more adequate. Chapter 5, “Scientifically Inexplicable,” makes a strong case against naturalism and its ability to describe and explain the existence of consciousness. This chapter is especially rich and provocative. In chapter 6, “Divine Agency,” Nelson further exposes the inability of secular naturalism to deal with matters of meaning and freedom, which turn out to be “miracles” (violations of strict determinism). In chapter 7, “Secular Religion, Christianity, and Modernity,” Nelson considers the historical, cultural context of secular naturalism. This passage summarizes much of Nelson’s project as a whole: “‘Science’ cannot provide the required meaning. Science has had extraordinary success in discovering the workings of the natural order and in giving human beings vastly greater abilities to put nature to use for human benefit. But there is nothing in the workings of the laws of physics—or of biological evolution—that gives meaning and purpose to human existence” (p. 250). The conclusion offers an interesting pairing of Nelson’s and Dawkins’s positions in which it turns out they both are “persons of faith.” That is, neither of them can develop his position in terms of self-evident truths. Both have to have trust in certain insights. At the end of the book, Nelson reminds readers that his series of arguments favor a general form of theism rather than a specific religious worldview such as Christianity. The book concludes with an intriguing teaser about taking his project further in making a case for Christianity: “To get to the full Christian God would require going beyond such exercises of reasoning [in the current book] to make a larger leap of faith—certainly to get to the Protestant God of Martin Luther or John Calvin who said that religious belief is a matter of faith alone. Maybe in the next book” (p. 268).

There are occasions when I think Nelson goes a little further than his arguments permit. For example, when he writes, “The existence of a world of matter, for example, is an illusion” (p. 253), I think what he might better claim is that he has shown how contemporary physics and philosophy have provided good reason to think that a commonsense materialism with which we may confidently describe a mind-independent physical world is problematic.

Another minor point: there is some awkwardness, at least for me, when Nelson presents reasons for thinking there is “a god of some kind” (p. 1), using the lower case g, and then shifts to referencing “God.” Most of us who are theists would rarely, if ever, present ourselves as believing that there is “a god of some kind.” Perhaps that is because we think that if theism is true, God is sui genus, utterly unique, and not one of potentially indefinitely many instances (as in the popular idea that there are 330 million deities in Hinduism). This issue may be complicated by those of us who (like me) accept the Social Model of the Trinity (according to which the Godhead is not homogenous but consists of three distinct but undivided Persons or centers of consciousness—Father, Son, Holy Spirit). This matter is hardly a serious detriment for Nelson’s fine book, though, if it is a detriment at all. Surely Nelson is aware of the primary cultural usage of the uppercase “God.” Allow me to speculate, though: Nelson’s use of the locution “a god of some kind” is perhaps deliberately meant to be provocative. If Nelson is correct (as I believe him to be) that secular naturalism is deeply problematic, there would be some satisfaction if his book were to prompt a secularist to say something such as, “Good heavens. I think I need a god of some kind in my worldview,” rather than the more tame and academic admission, “It appears that theism is more probable than I thought.”

Why is God? Very Probably so engaging and well written? As with virtually all books, it might be improved in places (I would have liked to see more summaries of the different stages in Nelson’s overall strategy), but I believe it is so successful because Nelson’s primary, earlier work is in economics. He has come to achieve an admirable grasp of the current, relevant literature in philosophy without having been formally schooled in some of the (overly?) specialized domains and subdomains of this field. This is why, I suspect, there is so little use of jargon that is opaque to “outsiders.” I highly recommend God? Very Probably to any reader interested in engaging one of the most important questions any of us can raise: the existence or nonexistence of God.