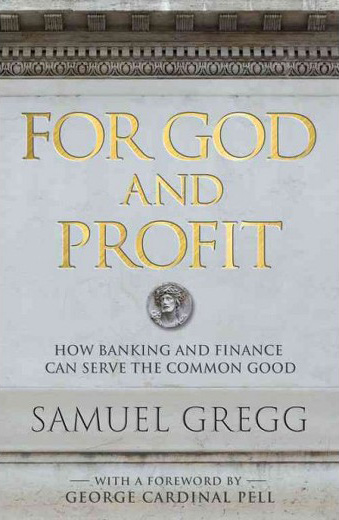 For God and Profit
How Banking and Finance Can Serve the Common Good
By Samuel Gregg
Kindle Hardcover
This book review appeared in the Fall 2017 issue of The Independent Review.

Finance as an occupation—never a praiseworthy occupation, like being a firefighter—has suffered because of the financial crisis of 2007–2008. Being a banker may not be that disreputable in and of itself, but being an investment banker or a currency speculator is seen as bad by many people today. Almost everyone loves to hate speculators and payday lenders. Speculators have been the subject of opprobrium from time immemorial for taking food out of the mouths of starving people simply to sell it for a profit. The U.S. federal government has gone after payday lenders by cutting off their access to banks, and there has been little complaint (other than from payday lenders, of course).

Not a typical economist addressing these questions, Samuel Gregg comes at the subject with a Ph.D. in moral philosophy and political economy from Oxford. He is the research director at the Acton Institute. Gregg doesn’t simply argue that finance is not all bad. He argues that financial activity is useful and that financial occupations can even be a vocation for some in the same way that being a priest is a vocation for others.

Parts of this argument are unlikely to be a hard sell to typical readers of The Independent Review. The benefits of speculation are based on a simple price–theory argument I first saw in a “Principles of Economics” course. I know economists who have defended payday lenders in print, and the economics of the argument are straightforward. If there is no fraud or dishonest behavior, it is hard to argue that payday lenders are making the borrowers worse off, as the borrowers see it, a point that Gregg makes.

The most unusual aspect of Gregg’s book is the combination of topics advertised in its very title: For God and Profit. We all know about defenses of free markets. God seldom appears in those arguments. What has God got to do with it?

Catholic social teaching about finance is historically related to usury—the receipt of interest when there is no cost (including opportunity cost) and no risk of loss. Those who made consumption loans to poor people historically—early payday lenders, you might say—were often thought to be usurers. Gregg briefly summarizes the long history of Christian thought about finance, including usury, against the background of financial development in Europe. He then summarizes where the development of finance is today in terms of the most developed Christian thought, Catholic social teaching.

Because people live in social settings, their choices are made in social settings, and the “common good” is the set of social conditions that help people to freely flourish. This notion of the common good is quite different from how it is typically conceived, even by some Catholic prelates. The common good inCatholic social teaching is not the “well-being of all,” a common definition. This common usage typically involves compulsion and restriction of people’s activities to achieve someone’s version of this “common good.” In contrast, the definition Gregg promotes involves people flourishing with their own free choices. This is not a definition Gregg presents because he finds it convenient or prefers it. He cites the fathers of the Second Vatican Council for this definition.

In Catholic social teaching, the use of goods such as money, financial funds, and the created world is governed by the notion that such goods are intended for the use by and for all people. I take this understanding to involve in part the principle that these “instrumental goods” are not reserved for some special class of people. This view is summarized in the phrase “the universal destination of material goods,” a phrase that does not mean that everything should be owned by everybody or that everyone should have the same holdings of goods.

Private property is justifiable given the universal destination of material goods because, as St. Thomas Aquinas himself noted, people take better care of their own property than they do of goods held in common. Furthermore, Thomas argued, common ownership leads to confusion, and private property is more conducive to peace. These arguments for private property are instrumental in the sense that they argue that private property works better, not that it is morally preferred on its own.

The combination of this universal destination of material goods and private property naturally leads to the inference that people should share what they have with less-fortunate people. Rather than invoke a rather arbitrary rule such as the requirement to share 10 percent of one’s income, the inference here is that one should share his or her “surplus goods.”

The argument founders here for me. What is a “surplus good”? One clear definition would be “a good that has zero or negative marginal value to me.” This is a silly definition in this context. It implies only that we should give away what is useless or worse than useless to us. No one has to be admonished to do that, and it is safe to say that little would be shared with the poor. No money or financial assets would be shared other than by people who are extraordinarily rich and don’t want to be bothered hiring a wealth manager!

Gregg invokes a recent book by Frank Hanna, who says that surplus wealth is “money that’s not demanded in any way by the obligations inherent in our circumstances and state in life” (qtd. on p. 101). This definition is not helpful, nor is it helpful to say that surplus wealth is wealth above what is necessary for genuine needs and beneficial goods for ourselves and those who depend on us. Other than what is necessary to sustain life, which is extraordinarily little, it is difficult to distinguish “needs” from “wants.” I am one of those who think it is better to abandon the word need beyond survival.

Gregg gives his best answer in the last sentence in the section “Surplus and Essential Wealth”: “What matters is that we put our wealth to work so that the conditions that promote the flourishing of every person and each community are enhanced” (p. 101). This clarification provides an answer to how much of our wealth to give away: give away some. Wealth invested also promotes human flourishing, sometimes more than wealth given away. Maybe this question of how much to give away is a problem that can’t be solved in general and depends on too many particulars to enunciate a general principal?

Gregg then argues that finance contributes to human flourishing. For most economists, this is obvious. For many other people, it is far from obvious. Many more people know who Bernie Madoff is than know who Jack Bogle is. Bernie Madoff was very successful and respected for a long time until it was discovered that he was a crook on a scale that is hard to even imagine. Jack Bogle at Vanguard and others before him pioneered index funds (see Matthew P. Fink, The Rise of Mutual Funds: An Insider’s View [New York: Oxford University Press 2008], pp. 98–100). These index funds have made a substantial contribution to the well-being of many less-than-rich people and have a side effect of lowering the incomes of those in financial markets.

Leaving aside crooks, people in financial occupations are trying to increase their wealth by manipulating financial assets. The point of this activity is less than obvious to many people. Even among economists, it is common to distinguish between the “real economy” and financial activity. Although financial activity may not be “unreal,” its contribution to people’s well-being definitely is more abstract than the activity of building cars.

Gregg does an excellent job of providing examples of the developed framework and how financial markets and banks can contribute to people’s well-being. It is a wideranging discussion. He discusses payday lenders, financial speculation including currency speculation, caps on interest rates, and forgiveness of low-income countries’ debt. He also discusses government bailouts of financial firms, as happened in the financial crisis of 2007–2008. As he says, it is not really right to let banks be “capitalists in good times and socialists in bad times” (p. 147). He also provides a preliminary discussion of financial regulation and what it might hope to accomplish.

The book’s primary intended audience includes (1) Christian clergy, (2) Christians working in finance, and (3) Christians interested in what a Christian perspective suggests about the finance industry and what they ought to do. Although the first group is pretty limited, the third is quite broad. Even more broadly, the book will be informative to anyone dubious or curious about the contribution of financial markets and banks to people’s well-being.

Gerald P. Dwyer, Jr.
Clemson University
Banking and FinanceCulture and SocietyEconomic History and DevelopmentEconomyPhilosophy and Religion
Subscribe Buy This Issue Get the App