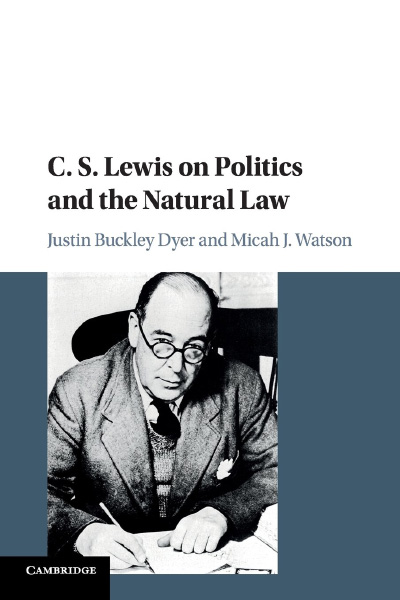 C.S. Lewis on Politics and the Natural Law
By Justin Buckley Dyer and Micah J. Watson
Kindle Hardcover Paperback
This book review is a web exclusive for the Summer 2017 issue of The Independent Review.

In C.S. Lewis on Politics and the Natural Law, Justin Dyer and Micah Watson provide an engrossing and well-documented introduction to the political philosophy of an author typically perceived as apolitical. Although Lewis claimed—and many of his closest companions attested—that he was both ignorant of and hostile toward politics, Dyer and Watson contend that Lewis thought deeply about political theory and was even well-versed in some of the most pressing political questions of his day. The breadth of their project is ambitious, and Dyer and Watson tempt critics by tackling questions that might properly attract the attention of philosophers, theologians, historians of thought, literary critics, and many others. Each chapter varies dramatically in scope, yet their approach seems suitable to their subject; after all, Lewis “was not a man: he was a world” (Peter Kreeft, C.S. Lewis: A Critical Essay. Grand Rapids, MI: Eerdmans, 1969, 4.)

The authors acknowledge that the first step in determining whether Lewis was apolitical or not is to define the domain of politics. As Dyer and Watson put it, Lewis, “was not actively involved in partisan politics,” but “had much to say about the underlying foundations of a just political order” (p. 7). Lewis also had little to say about the internal workings of a bureaucratic government or the sort of political news that makes its way to the front page, but he said a great deal about the nature of man and his relationship to society. The authors demonstrate that Lewis produced a moderate amount of commentary on what we might call contemporary political issues, ranging from foreign policy to a theory of criminal punishment.

Lewis was classically trained, and certainly acknowledged Aristotle’s argument that man is a “political animal.” Dyer and Watson note, “Lewis cared a great deal about political life precisely because of the role it plays in helping or hindering human beings in realizing their telos, or their good” (p. 16). So when C.S. Lewis engaged in popular apologetics and social criticism, he inevitably tackled political issues. Dyer and Watson make a concise and convincing case for turning our attention to the political implications of Lewis’s writing, and then sketch out those implications, beginning with the broad and concluding with the surprisingly specific. This is quite right in terms of putting his particular and specific arguments in the proper context, but it also has the effect of burying some of his most pointed political statements at the end. For the first four chapters, the reader is apt to believe Lewis was political exclusively in the philosophical sense, when in fact Dyer and Watson demonstrate that the myth of the apolitical Lewis is false in even pedestrian terms. Along the way, they demonstrate that Lewis’s approach to political questions is characterized by wariness toward claims of authority figures to have either the competence or the intention to make men moral. In short, Lewis suggests a politics distinguished by humility.

In their early chapters, Dyer and Watson discuss Lewis’s thoughts on anthropology, the effects of original sin in society, humanity’s ability to grasp moral truth, and the relationship between God and man. A far cry from our routine political conversations. But by starting with these topics, Dyer and Watson demonstrate the fidelity of their approach to Lewis’s own priorities, and give credence to their thesis that Lewis could be both apolitical in one sense and deeply political in another. If you read The Abolition of Man looking for a political agenda, you will be disappointed; but if you argue it has no political implications, you have not fully appreciated Lewis’s arguments. In these chapters, Dyer and Watson demonstrate that Lewis’s commitment to objective morality leads him to criticize both fascists and democrats who act as though morality “is merely a social construct that exists to serve the interests of its creators” (p. 45). For Lewis, morality exists before and outside of governments, and any attempt by a society or a government to shape a new morality is incoherent and dangerous. He would have the government lower its sights, and focus instead on fostering “the ordinary happiness of human beings in this life” (Mere Christianity, New York: HarperCollins, 2009 [1952], p. 169).

As the authors turn to discuss Lewis’s approach to questions that we more readily recognize as political, his rejection of the conceit demonstrated by those in power takes center stage. I confess, as an economist with an enthusiastic esteem for F. A. Hayek’s critique of central planning as well as the Public Choice school, I appreciate Lewis’s approach to democracy which highlights not that all men are equally wise and good, but rather that no men are fit to be masters (p. 87). Elsewhere the similarity to Hayek is even more clear. As Dyer and Watson put it, “Lewis was in favor of healing sickness and fighting hunger, but he also recognized that the promise of doing so through the institutions of government rested on a claimed ability to regulate and rationally plan various aspects of an increasingly complex international economy. Few, if any, have the requisite knowledge to do so” (p. 62). Indeed, Lewis talks about both the necessity of this claim to knowledge and of the men in power as “simply men” who are subject to the same sins and imperfections as the rest of us. Finally, Dyer and Watson argue that Lewis, “was entirely skeptical that government can enforce or even inculcate a conception of the good at all” (p. 122). Lewis was no moral relativist, so we should understand his hesitance as rooted in deep reservations about the fitness of mortals to govern, rather than in doubt about our ability to know the difference between right and wrong.

Dyer and Watson highlight some thoroughly modern elements in Lewis’s political thought, and then show how Lewis turns even those elements against our modern democracies. Lewis proclaims repeatedly that he distrusts theocracy on the grounds that the theocrat will be tempted to interpret his own desires as mandates from heaven. It is tempting to read his repeated insistence that “theocracy is the worst form of government” as a strategic choice. By acknowledging theocracy—which is not, and was not, a genuine threat in Western democracies like England and America—as the worst form of government, he disarmed his audience, who would have been inclined to agree. Lewis then drew the parallel to the true threat of his own day: a paternalistic government that is technocratic and scientific in its outlook. He wrote “I dread government in the name of science. That is how most tyrannies come in. In every age the men who want us under their thumb, if they have any sense, will put forward the most particular pretension which the hopes and fears of that age render most potent. They ‘cash in.’ It has been magic, it has been Christianity. Now it will certainly be science” (p. 84).

Despite Lewis’s obvious concern about modernity, Dyer and Watson note that it is “significant that Lewis did not propose returning to an ancient or medieval approach to politics” (p. 85). In what I find the most intriguing chapter, the authors make a strong case that despite being a “dinosaur” medievalist, at home with the ancients, Lewis’s political thought was influenced by his reading of John Locke, and tends toward classical liberalism. But Lewis is a very different kind of democrat, and a not too enthusiastic classical liberal. Dyer and Watson are hesitant to emphasize this seemingly illiberal component of Lewis’s thought, acknowledging that his acceptance of natural hierarchy even within humanity is jarring to modern sensibilities. In That Hideous Strength (New York: Macmillan, 1946, p. 166), the thoroughly modern Jane suggests that equality is “the deepest thing,” to which the director replies, “Equality before the law, equality of incomes—that is very well. Equality guards life; it doesn’t make it.” Dyer and Watson concede that Lewis’s simultaneous endorsement of democracy and hierarchy leads Lewis to endorse positions that may not satisfy all his readers.

The authors explain some of the tension in Lewis’s thought as the inevitable consequence of believing in a thoroughly Christian anthropology as well as in the stubbornness of our own post-Christian society. (p. 123). As they note, Lewis concurrently encourages “Christian economists” to put their beliefs into action through their work and then warns against trying to enforce Christian norms through the state. Thoroughgoing traditionalists and enthusiastic democrats alike will find something to dislike about Lewis’s attempt to synthesize these facts about the world. Dyer and Watson themselves acknowledge that Lewis’s approach is easier explained than applied, and suggest that this tension is an important part of why Lewis was so hesitant to offer specific advice on everyday political issues. However, Lewis’s writings are not entirely devoid of everyday political advice, and contains counsel about how the government ought to approach issues like criminal punishment, war, homosexuality, and whether or not Christians should start their own political party (they shouldn’t).

The authors frame their book as both an invitation and an introduction to Lewis’s political thought—and are modest enough not to claim to have covered all that there is to cover. Given the devotion of Lewis scholars, we can be confident that we will soon see other scholars taking a more focused approach to some of the questions Dyer and Watson raise in this text. In addition to providing an impressive catalogue of Lewis’s approach to political questions, the book has paved the way for additional inquiry along these lines by firmly establishing Lewis as a legitimate source for political wisdom.