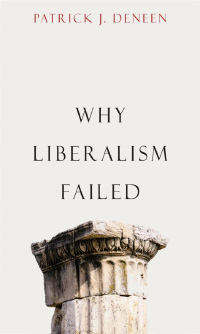 Patrick J. Deneen’s The Failure of Liberalism is to all appearances an anti-modernist Catholic polemic that has elicited praise and support from unexpected admirers, whether Yale University Press or the New York Times. Indeed the Times (January 17, 2018) devoted a glowing review to Deneen’s arguments, together with Ron Dreher book-length call for the “Benedictine Option” for Catholics and Eastern Orthodox who feel alienated from the present age. Never have self-proclaimed reactionaries been in such favor in our PC media community. If we add to the aforesaid names New York Times-columnist Ross Douthat, who is a Catholic convert and an ostentatious Trump-hater, then we have a trinity of putative reactionaries whom the Left can’t stop saying nice things about.

A (for me) obvious reason for the stardom of such figures is that in no way do they threaten the Left. Moreover, they often take the same political stands as their non-rightist fans, e.g., deploring the presence of Donald Trump and denouncing white racism, homophobia and economic inequalities. These soi-disant traditionalists may have been inspired by Anglo-Catholic precursors, particularly the radical orthodox intellectuals grouped around John Milbank at the University of Nottingham. A sociologist and theologian, Milbank has managed to combine Labourite politics with a devotion to ancient liturgy. I myself heard lectures given by this professor and his disciple Catherine Pickstock, attacking European counter-revolutionaries for being overly worldly and then lambasting Margaret Thatcher for denationalizing English industries and being insensitive to Third World immigrants.

I note these idiosyncrasies with regret, for there is much in Deneen’s book that I agree with, e.g., his observations about the differences between classical and medieval ideas of justice and the early modern European invention of natural right, his skepticism about John Locke’s profession of Christian piety, and his concerns about the West divesting itself of its religious legacy. David Gordon of the Mises Institute has gone after Deneen for following too closely Deneen’s colleague at Notre Dame, Michael Zuckert, and Zuckert’s Straussian reading of Locke (see Launching Liberalism: On Lockean Political Philosophy, University Press of Kansas, 2002). Contra Zuckert, according to Gordon, one could make a good case that Locke was a Christian. The English philosopher assumed that the consciousness of God was an idea innate in mankind that came from a divine source. But Zuckert and Deneen are correct to emphasize the constructivist nature of Locke’s concept of civil society and the substitution of pre-political individual rights for an older more organic understanding of people’s place in an already structured society. According to Aristotle as well as Marx, we do not invent our society; we are born into it and formed by its preexisting authorities.

There are certainly scholarly reservations that I would register with regard to Deneen’s work. He has relied too heavily on Straussian sources, even if he starts from premises that are opposed to the Straussian celebration of America as a modern, democratic (presumably Lockean) society. Nowhere in his work do I find references, for example, to Michel Villey’s studies of the invention of natural rights in early modern Europe (Philosophie du droit, 2001). A longtime Sorbonne professor of ancient and medieval law, Villey demonstrates in what ways natural rights theorists departed from the essentially Aristotelian and Ciceronian jurisprudential framework that lasted from classical civilization down to the end of the Middle Ages.

In the Nicomachean Ethics (Book Five), Aristotle speaks not of individual right but of the Just (to dikaion); and this concept is defined in two senses, as conformity to authoritative standards of conduct and as a proportionate assignment of rights, responsibilities and property within an existing legal system. According to Villey, Aristotle’s concept of the Just assumes the establishment of judicial and legal norms and does not provide for the operation of rights, certainly not for individuals, outside of a particular social context. Receiving benefit or punishment corresponding to one’s due (kat’achsian), according to Aristotle and Villey, presupposes the prior existence of a formed society, with customs and ranks.

This association of the Just with being situated in a hierarchical order prevailed in the West until natural rights thinking was constructed in the early modern period. But (pace Deneen and the Straussians) it is not an abstraction known as “modernity” but concrete historical conditions that caused this to change. Indeed the beginnings of natural right theory can be found among Jesuits in Spain and among the Presbyterian Covenanters in Scotland in the mid-sixteenth century, several generations before it emerged in the political writings of Thomas Hobbes and later, in Locke, Samuel von Pufendorf and Hugo Grotius. Integral to the evolution of natural right thinking were the trauma of religious wars and the seizure of ecclesiastical power by Catholic as well as Protestant territorial princes in the wake of the Reformation and Counter-reformation. Medieval hierarchical ideas about ascending levels of authority were no longer useful to religious minorities or to Catholic churchmen in the face of this encroachment by temporal princes. The atomistic interpretation of political society and the positing of pre-political individual rights were responses to the seizure of power by civil governments for which older scholastic notions of government no longer seemed adequate. Making broad assertions about the replacement of pre-liberal or pre-Protestant social concepts by later, more modern ones is no substitute for detailed historical explanation. Deneen features value judgments pretending to be something more.

He also assumes that liberal bourgeois societies of the kind that prevailed in the West by the nineteenth century betrayed their promise because they created or perpetuated economic disparities. To my knowledge, advocates of capitalism and constitutional government never promised to make people economically equal. They believed their reforms would increase general economic prosperity, which in fact happened over time. It’s also unclear whether pre-modern regimes would have done any better than what replaced them in alleviating poverty; or what pre-modern social arrangements Deneen would like to substitute for those developments that began in early modern Europe.

Culture for Deneen is specifically Catholic. Although it includes pre-Catholic thinkers like Aristotle, Plato and Cicero, the only Protestant whom he presents as culturally valuable is John Milton. Not surprisingly, liberalism for Deneen is “parasitic.” It “extends itself by inhabiting spaces abandoned by local cultures and traditions, leading either to their discarding or suppression, far more often to their contentless redefinition. Rather than produce our own cultures, grounded in local places, embedded in time and usually developed from an inheritance from relatives, neighbors, and community, we are more likely to consume prepackaged, market-tested, mass-marketed consumables often branded in commercialized symbolism that masks the culture’s evisceration” (p. 88). Are we to blame these presumed ills on seventeenth-century political thinkers whom Deneen dislikes or perhaps on James Madison, who was influenced by these writers? And what about our once established liberal freedoms? Can’t we give them some credit for leading to good things, e.g., allowing bearers and creators of culture to thrive without political persecution?

Finally, I would point out that Deneen applies “liberal” in such a variety of contexts that it never assumes a clear, historically situated meaning. In my book After Liberalism: Mass Democracy and the Managerial State (Princeton, NJ: Princeton University Press, 1999), I examine the changing use of this term from the mid-nineteenth century on; and it is obvious that my work hardly exhausts the meanings of the operative term. Nonetheless, Deneen assumes a constant meaning for “liberal.” It is the set of political and social assumptions that he traces back to Hobbes and Locke and which is reducible to the construction of pre-political liberties and to the creation of government that renders these liberties secure. But Deneen has to stretch more and more to make these assumptions explain what he dislikes about the present. I’m still trying to figure out how Hobbes led to commodified culture.