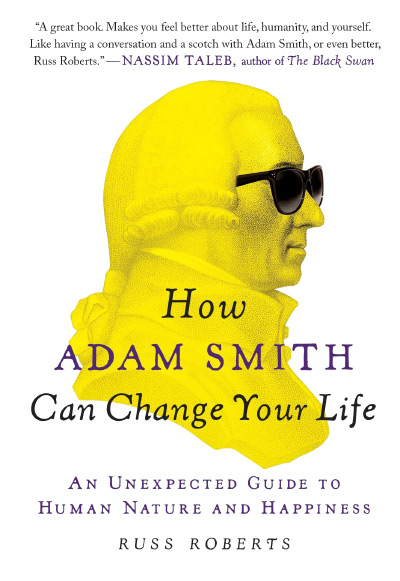 How Adam Smith Can Change Your Life
An Unexpected Guide to Human Nature and Happiness
By Russ Roberts
Kindle Hardcover Paperback Audiobook Audio CD
This book review appeared in the Fall 2015 issue of The Independent Review.

Academics often struggle to communicate ideas to the wider public, but Russ Roberts has made a living doing just that and doing it well. His latest entry into the public discourse is a beautifully written guidebook to Adam Smith’s other book, The Theory of Moral Sentiments, about how to live a full and virtuous life. It might seem strange for the author of An Inquiry into the Nature and Causes of the Wealth of Nations, a book about commercial self-interest, to write a book about virtuous living. Members of the German Historical School thought so as well and labeled the seeming contradiction “das Adam Smith Problem.” Smith scholars have since resolved the contradiction by arguing Smith was writing about two different spheres of life, the one dominated by impersonal interactions in which we rely primarily on our self-interest (The Wealth of Nations) and the other dominated by personal interactions requiring us to use more than just our narrow self-interest (The Theory of Moral Sentiments). Properly understood, both books become essential for understanding the Smithian view of the world and its relevance to our own lives and the way we organize society. The problem for modern readers—“das neue Adam Smith Problem,” if you will— is that Smith’s full relevance is obscured by the fact that The Theory of Moral Sentiments remains largely unread, undiscussed, and unappreciated. Roberts’s new book helps pave the way to resolving “das neue Adam Smith Problem.”

Roberts has written an easily accessible guidebook to The Theory of Moral Sentiments. As his title suggests, he conceives his book as a way to introduce the modern reader to Adam Smith the self-help author. Roberts does a fine job relating how we can use Smith’s theory to improve our everyday lives and further connects the modern reader to Smith’s thought by applying his theory to modern examples. These aspects of Roberts’s book will resonate with a wider audience. However, the book can also be read as an introduction, a type of extended prologue, to The Theory of Moral Sentiments itself. One of the great strengths of Roberts’s guidebook is that he allows Smith to speak directly to readers by use of extensive direct quotations from The Theory of Moral Sentiments. Roberts introduces direct quotations from Smith, elaborates on Smith’s point for the modern reader, and then repeats the process. The technique flows seamlessly and guides the reader through Smith’s theory in an accessible way. More importantly for resolving “das neue Adam Smith Problem,” Roberts makes the reader want to pick up Smith’s book.

Roberts describes different parts of Smith’s theory over the course of a series of how-to chapters—for example, “How to Know Yourself” (chapter 2), “How to Be Happy” (chapter 3), and “How Not to Fool Yourself” (chapter 4). To introduce Smith’s theory, he begins with Smith’s observation that we feel much worse about the loss of one of our fingers than about the deaths of thousands of strangers in a far off land such as China. People are self-interested. At the same time, Smith recognizes no “man of humanity” would ever choose a finger over the lives of thousands. Although people are clearly self-interested, they sometimes act against their selfinterest. Why? Enter Smith’s impartial spectator. We make decisions based not only on our own self-interest but also on what we imagine an objective figure, an impartial spectator, would think about whether our decisions are right or wrong. Roberts suggests we can use the impartial spectator as a powerful mental tool for self-improvement. Faced with a difficult moral choice? Imagine an impartial spectator hovering above as you think about your decision and what others might think of it. An impartial spectator also allows opportunities to step outside ourselves and observe who we really are. More importantly, imagining an impartial spectator allows us to go through life mindfully, which, as Roberts suggests, is “the art of paying attention instead of drifting through life oblivious to your flaws and habits” (p. 31).

Happiness and our desire to achieve it are central to Smith’s theory. We achieve happiness by being loved and being lovely. By “loved,” Smith does not mean in a romantic sense but rather simply being liked, respected, and cared about by other people. The term lovely, then, refers to being worthy of being loved.We not only want to be loved but also want to come by that love in an authentic and deserved fashion. We desire a good reputation, honestly earned.

Unfortunately, Smith knows people are prone to self-deception, which breaks down the functioning of the impartial spectator and fuels our natural self-interest. As a result, self-deception can hurt our ability to be lovely. We deceive ourselves about the true nature of ourselves, which prevents the process of growth and improvement the impartial spectator helps us to achieve. Self-deception prevents us from taking a true look at ourselves in the mirror. We think we are lovelier than we actually are, so we go through life failing to address our flaws.

Smith’s theory does not leave us helpless against self-deception, though. We have access not only to an impartial spectator but also to real spectators as well. We can observe the people around us, who themselves are flawed, as a means of identifying our own shortcomings and a motivation for remedying them. Interacting with our neighbors also weakens the powers of self-deception because we observe social norms about good and bad behavior in practice. Our neighbors’ judgment provides incentives for us to act in ways consistent with achieving happiness.

Next Roberts addresses how Smith proposes we achieve being loved and being lovely. Smith acknowledges two paths to being loved, but he favors only one. The first path to being loved by others is through fame, fortune, and power. One of the reasons we seek riches and fame is that we observe celebrity being loved by the masses in society. Our desire to be loved provides a powerful temptation to pursue this path, but Smith does not mince words about the pitfalls of such an approach. For him, the pursuit of riches and fame never satisfies. The glittering path of riches and fame causes much unnecessary anxiety, and if we achieve riches and fame, we give up forever many comforts of life, such as our leisure and privacy. Smith also invokes (although not in these words) the hedonic treadmill as a reason why we never achieve what we are promised if we pursue riches as a means to be loved.

The second path to being loved, the one advocated by Smith, is to pursue wisdom and virtue. Living a good life is how one becomes lovely and thus loved. At a minimum, Smith encourages propriety, by which he means acting appropriately. He has in mind our ability to act with sympathy to those around us. Our behavior conforms to the expectations of those around us, which allows us to gain trust and share emotions with one another. As Roberts notes, this is the beginning of respect and loveliness. To be admired and celebrated, however, we must also be virtuous. Smith’s most important virtues are prudence, justice, and beneficence. By prudence, Smith means taking care of yourself mentally, financially, physically, and socially (i.e., taking care of your reputation). By justice, he means not hurting other people. An impartial spectator helps remind us of what is just. Beneficence requires being good to one another, which is more difficult to define than justice. Smith gives gratitude as an example of beneficence. In summary, Roberts states, “Virtuous behavior is like good writing. We know it when we see it, but it is not easily taught or described with any precision” (p. 160).

This concludes what I consider the core of Smith’s theory that runs throughout Roberts’s book. Although Roberts’s book is much shorter than I would prefer, each page contains many thought-provoking ideas related to Smith’s theory and its applications. In describing the core of Smith’s theory, I have had to leave out many aspects of the book. Roberts is at his best when he relates Smith to our own lives and society. The passages on celebrity (pp. 97–116), for example, shine and are some of the best in the book. Anyone in our Instagrammed and YouTubed world would profit from these passages. Likewise, Roberts allows Smith to opine on our desire for newer and better gadgets but also to remind us of their inability to make us happier (pp. 87–94). Or consider why people tolerate the abuses of the politically powerful: “To oppose the tyrant goes against our nature, not because it is dangerous, says Smith, but because we idealize his greatness and happiness” (p. 107). Roberts provides an elegant description of the spontaneous moral order arising in a society populated by people seeking to live a virtuous life (chapter 8, “How to Make the World a Better Place”).

How Adam Smith Can Change Your Life serves as a worthy introduction to The Theory of Moral Sentiments. Reading it will help you solve “das neue Adam Smith Problem” for yourself and allow you to have a fuller appreciation of the Smithian point of view. Those wanting an even shorter introduction to Roberts’s book should consider watching Nick Gillespie’s hour-long interview with Roberts on Youtube.