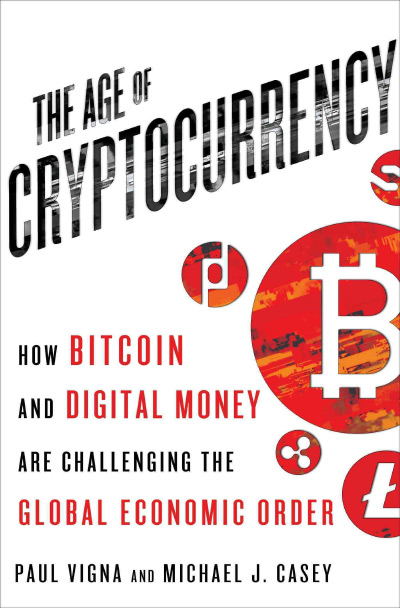 The Age of Cryptocurrency
How Bitcoin and Digital Money are Challenging the Global Economic Order
By Paul Vigna and Michael J. Casey
Kindle Hardcover Paperback Audiobook Audio CD MP3 CD
This book review is a web exclusive for the Fall 2015 issue of The Independent Review.

Two words, “currency” and “money,” are often used interchangeably. But a very important distinction is lost in doing this, and one of the great contributions of Age of Cryptocurrency is the way the authors keep the distinction in mind, and explain so clearly why it matters.

A “currency” is the physical, or least notional (it could be digital), stuff that we use in transactions and to save. The usual things matter: universally accepted medium of exchange, unit of account, store of value, hard to counterfeit. And the units or name of the currency are important. “Money,” on the other hand, is the set of institutions that a society, a financial system, or an interconnected set of global markets use to clear transactions.

These two concepts, currency and money, could be connected organically. Or, as in much of the financial world today, they can be connected uncomfortably, a result of arrangements that may once have made sense but are now increasingly an anachronism. Worse, the “connection” is now a means of rent-protection for a few historically privileged intermediaries such as Visa and MasterCard.

The simplest way to understand Bitcoin, then, as the authors make clear, is a cryptocurrency that is organically also a comprehensive monetary system for storing records of transactions and clearing new transactions. These two aspects of Bitcoin—first a currency that appears to be an innovative way to preserve anonymity and second a register for clearing transactions that appears to be an innovative way of recording and confirming the identities of buyers and sellers for all time—seem to be in tension with one another. That the anonymous currency is connected (nearly) seamlessly to the (nearly) indestructible blockchain of identities is a remarkable practical, financial, and intellectual achievement.

Why Should I Care?

Vigna and Casey are both writers for the Wall Street Journal, with considerable backgrounds in U.S. and global financial markets. But they sound a bit peeved about narrow control and costs of what they call “toll collectors,” the financial intermediaries that once facilitated but now in many ways hold up transactions. Anyone who has tried to wire money internationally has experienced the frustration—substantial fees and significant delays—that hinder almost all exchange clearing services, except that much of the system is less visible.

Vigna and Casey directly the address the “why should I care?” question that many people would want to ask. Bitcoin seems sketchy, dangerous both because it smacks of illegality and because the volatile value of each bitcoin makes holding even a few seriously risky. And, to be sure, Vigna and Casey themselves are not enthusiasts, recognizing the risk and granting that the alternative currency and monetary system is far from ready for prime time.

Still, on p. 6 they outline what is potentially at stake.

The day you started earning and spending money is the day you began repeatedly handing over slices of that money to [financial intermediaries, especially banks and credit card companies], often adding up to millions of dollars over a single person’s lifetime. Cryptocurrency promises to stop that outflow and put the money back in your pocket. That, in the most basic way, is bitcoin’s value proposition...

Later chapters give remarkably detailed accounts of the technical workings, the history, and the community of oddballs and entrepreneurs (note: those two groups are certainly not disjoint!) that describe what Bitcoin has become. And the authors do a nice job of describing the features, and the bugs, in the burgeoning group of Bitcoin competitors.

As a (reserved) enthusiast for Bitcoin myself, I found that I learned a lot, more than I expected to learn, from Vigna and Casey’s work. The book works both as a detailed history and a carefully explained technical schematic. My own view, if it matters, is that Bitcoin is not especially important as a currency, but that it may revolutionize areas that now lack moneys. A system for reliably and cheaply storing value and clearing transactions could fundamentally transform failed states that now lack basic financial infrastructure. And the blockchain holds promise even for advanced nations, as it reduces the transactions cost of contracts, escrow payments, and credible commitments to pay. If transactions costs are the frictions that prevent smooth functioning of economies, a technology like the blockchain may well be the ultimate lubricant.

It’s a cliché, but I think it’s justified here: if you are only going to read one book about cryptocurrencies, make it this one.