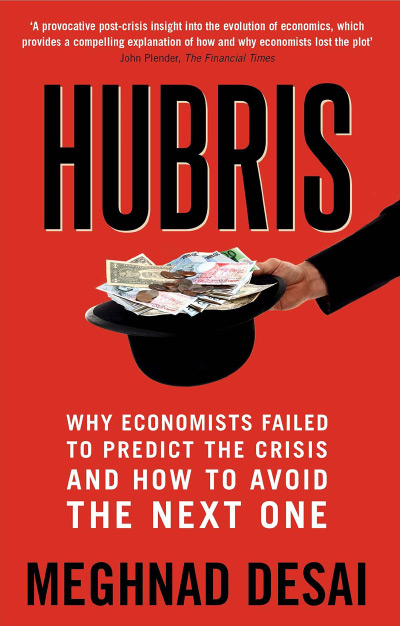 Hubris
Why Economists Failed to Predict the Crisis and How to Avoid the Next One
By Meghnad Desai
eTextbook Hardcover Paperback
This book review is a web exclusive for the Fall 2015 issue of The Independent Review.

Hubris is not what I was expecting. The title suggests that Meghnad Desai (emeritus professor of economics at the London School of Economics) will demonstrate that economists are a proud and arrogant bunch, whose excessive self-confidence caused them to be blind-sided by the Great Recession. This isn’t what he delivers. Although the economists I know seem less proud and arrogant than many other academics (not necessarily a good benchmark), Desai’s central thesis may, in fact, be correct. Or it may not be. To find out you’ll have to read (or write) another book.

A keen reader of this list will have noted that Desai has a fondness for long-wave theorists (Juglar, Kondratieff, and Kitchin). I remember briefly hearing about these during my undergraduate years and then feeling ignorant when a fellow graduate student began discussing them. Why hadn’t I learned more about them? The answer became clearer when I began to look at long-run historical economic data. Ups and downs, yes – mainly large ups versus smaller ups. Long-term waves? Not that I can clearly see. Yet, Desai asserts that “If you plot the course of income or sales or investment, it will look like a wave” (p. 107). Maybe it’s a matter of perspective, but that’s just not what I see. I see trends, with a lot of choppiness in them, not smooth predictable waves, pictures of which you’ll see if you google “Kondratieff waves.” And most other economists don’t see such waves either, which is why very few of us think in these terms. Yet, Desai raises some interesting points – especially about longer-term demographic and political forces, and swings in the share of income going to labor vs. profits, so one needn’t begrudge his search for “waves” hidden behind headline series.

This history (waves and all) is Desai’s prologue to an untenable claim that economists concluded during the 1990s that the problems of boom and bust had finally been solved. They did? Why wasn’t I informed about this sooner!?! Desai drops maddening comments, such as “The developed economies had conquered the problem of ‘boom and bust,” as Gordon Brown, the Chancellor of the Exchequer in the UK, asserted” (p. 218), pretending that this was the position of economists (rather than politicians) and without providing a footnote to back it up the claim in the first place. Then he lets slip that some economists, such as Raghuram Rajan – chief economist at the IMF, no less – did warn of problems before the crisis but were “dismissed” as Luddites (p. 220). Dismissed by who? Again, no citations.

In Desai’s telling economists didn’t see the crisis coming because “modern mainstream macroeconomics ... had ruled out the possibility that such things could happen. Macroeconomic models are highly mathematical and are built around the assumption that markets always clear .... This precludes the possibility of a recession” (p. 9). He knows the field far better than I do, but the lowly textbook version of macro with which I’m most familiar does nothing of the sort. It obsesses over the possibility of recessions – and has done so for the quarter century I’ve been teaching. It stresses recessions and how to combat them far more than long-term economic growth and how to encourage it. And Desai’s claim that “everyone expected [housing prices] to go on rising” (p. 4) – everyone – is a tad overstated. Rather, before, during and after the housing boom, economists repeatedly warned people that too much leverage is a bad thing. People typically have responded to these warnings by booing and asking for more subsidies and more insurance.

The volume’s intriguing final section concludes that “there are no permanent laws in economics. Only historically contingent truths,” (p. 238) and offers an overly brief explanation of what’s going on today, which pulls together thoughts about seventy-year cycles, a Marxian-inspired look at cycles in the share of income going to wages and a Hayekian theory of short cycles caused by credit conditions. (That’s right, he’s a fan or both Marx and Hayek!) His provocative conclusion is that “capitalism is a dynamic system but works best through creating cycles and crises” (p. 262).

Back to book’s title – after a cutting line about economists being “as smug as ever” (p. 12), Desai notes that the Nobel Prize in Economics still goes to contributors to the “new classical economics” paradigm which he thinks was discredited by the recession, mentioning Thomas Sargent by name. This doesn’t sound like the Sargent that I’ve met. When he spoke on my campus a few years ago, students were taken on a not-smug-at-all tour of U.S. economic history, which concluded that things are really complicated and it’s hard to know what are the best institutional arrangements (see “Drawing Lines in U.S. Monetary and Fiscal History,” in G. Page West III and Robert M. Whaples, editors, The Economic Crisis in Retrospect: Explanations by Great Economists, Edward Elgar, 2013). Ironically, Sargent famously appeared in an ad for Ally Bank. Serenaded by classical music, sitting in front of a stuffy-looking auditorium Sargent is dramatically introduced as “Thomas Sargent, Nobel laureate in economics and one of the most cited economists in the world.” The moderator then asks “Professor Sargent, can you tell me what CD rates will be in two years?” The camera zooms in and Sargent subtly shakes his head and flatly intones his one-word answer: “No.” Dead air and blank stares follow. If proclaiming ignorance is smugness, Desai has a valid point.

My conclusion is that the economy is an immensely complicated system. The economists whose ideas Desai examines all made valiant, although inadequate attempts at understanding it. The evidence he presents doesn’t convict any of them as arrogant and full of hubris (which doesn’t mean they weren’t), but the story reads more like one of discovery and brilliant attempts to conceptualize the order (or disorder) of things. Economists clearly have their biases – aptly captured in Desai’s comment that “The sheer unrealism of the Walrasian model was an attraction rather than a hindrance, thanks to its mathematical elegance” (p. 182) – but this seems to me a different problem than hubris.

(One final point: Economics and theology, apparently don’t mix well. Desai misquotes William Jennings Bryan as saying “You shall not hang mankind on the cross of gold” (p. 65, emphasis added). The correct wording is “You shall not crucify mankind upon a cross of gold.” Only a page later, he drops the anecdote that Knut Wicksell spent two months in jail for “satirizing the Immaculate Conception.” This statement is repeated in many sources on Wicksell, but digging deeper it turns out that Wicksell’s speech had St. Joseph saying “Why couldn’t the Holy Spirit have let me make my little Jesus myself.” Wicksell was, in fact, alluding to the notion of the virgin birth of Jesus, not the doctrine of the Immaculate Conception, which holds that the Virgin Mary was conceived without original sin.)