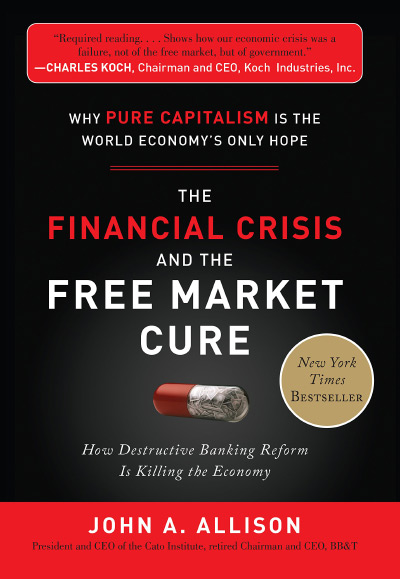 The Financial Crisis and the Free Market Cure
Why Pure Capitalism Is the World Economy’s Only Hope
John A. Allison
Kindle Hardcover Paperback Audiobook Audio CD
This book review appeared in the Fall 2013 issue of The Independent Review.

A busy reader wanting to understand the subprime crisis now has dozens of books to choose from, even counting only the ones by authors who know what they’re talking about. So when I say that you absolutely must not skip John Allison’s The Financial Crisis and the Free Market Cure, I had better give you some good reasons for saying so.

My main reason has to do with John Allison himself. Allison’s perspective on the crisis is both unique and exceptionally revealing, for, unlike the authors of other books on the subject, he is neither an economist nor a financial journalist. He’s a banker—a darned good one. Under his leadership, BB&T not only survived the crisis but came through it with flying colors. Allison’s long tenure as BB&T’s CEO helped: unlike other bank CEOs, he remembered the losses that banks incurred during the real estate cycle of the 1990s and so knew better than to believe the generous mortgagebacked security ratings that were being handed out by Moody’s, Fitch, and S&P. His extensive reading in economics apparently helped as well, making him more aware than most bankers (and indeed most professional economists) of the Federal Reserve’s capacity to promote an unsustainable credit boom and then deny its existence.

In fact, Allison is excellent on many topics. He explains, as only a prudent and economically literate banker can, how Federal Deposit Insurance Corporation (FDIC) insurance allowed his less responsible counterparts to “poison the market” by underpricing the risks they were taking and how the Basel capital standards encouraged financial firms to load up on both subprime and sovereign debt. He also gives good accounts of how the WorldCom and Enron scandals led to the fateful involvement of Fannie Mae and Freddie Mac in subprime (including Alt-A) lending, of why the AIG bailout made little sense except as an indirect means for bailing out Goldman Sachs, of the way in which “fair-value” accounting rules added to the severity of the bust, and of how restrictions on foreclosures have helped to stymie the postcrisis recovery.

Although much of what Allison has to say about the subprime crisis reinforces and clarifies other expert testimony, his book also contains observations that, if not exclusively his own, are at least not commonly encountered elsewhere. To give one important example, conventional wisdom attributes the drying up of wholesale credit toward the end of September 2008 to the collapse of Lehman Brothers two weeks earlier, and economist John Taylor says it was more likely a response to Ben Bernanke and Henry Paulson’s scary September 23 Troubled Asset Relief Program testimony. Allison, drawing on his insider’s perspective, fingers a third culprit: the FDIC’s decision, following Washington Mutual’s failure on September 26, to pay that bank’s uninsured depositors in full, not using its own funds, but by putting WaMu’s bondholders on the hook instead. Allison argues persuasively that it was this cavalier expropriation of WaMu’s senior creditors rather than either Lehman’s failure or the Bernanke–Paulson Chicken Little routine that “closed the capital markets for banks” (p. 76), dealing a fatal blow to Wachovia and otherwise turning what might still have been a containable subprime crisis into a full-fledged economic catastrophe.

But the most revelatory parts of Allison’s book are those concerning his dealings with bank regulators, whose meddling comes in for his most scathing criticisms. Ineffective in spotting trouble in advance—“in almost every case of bank problems or failures, government regulators have been the last people to know” (p. 41)—regulators excel at slamming barn doors shut once the most ill-mannered horses have bolted. This tendency, together with other bureaucratic incentives, causes regulation to be highly pro-cyclical, with regulators egging on lenders during credit booms and enmeshing them in red tape when the economy is starving for credit. When the strictness with which regulations are enforced isn’t merely pro-cyclical, it is also haphazard. For example, during the first years of the Clinton administration, BB&T, having been accused (on dubious statistical grounds) of discriminatory lending practices, was infested by bank examiners who insisted on rifling through its books and blocking its mergers until it agreed to confess to wrongdoing. Then the Republican Revolution happened, and the examiners simply packed their bags and went home.

Disturbing as such arbitrary regulation can be, it is regulators’ pro-cyclical conduct that does the most harm. BB&T was able to appreciate the true risks inherent in subprime mortgages and securities derived from them because it refused to abide by regulators’ attempts to force it to use the model-based approach to risk management that other large banks, including Wachovia and Citigroup, used. Then, after the collapse, regulators forced BB&T to deny credit to good clients, some of whom consequently failed, by strictly enforcing ill-conceived minimum-capital requirements. Those requirements left bankers no choice but to base decisions to renew or not to renew loans not on borrowers’ overall risk ratings, but on the risk grades assigned to particular loans. Thanks to fair-value accounting rules—another regulatory imposition—BB&T was forced to downgrade many of its loans during the crisis and consequently found itself unable to renew many of those loans, given the difficulty of raising capital in the midst of a panic. As if all this weren’t bad enough, BB&T could not legally inform despondent customers of the true reason for its having set them adrift because the FDIC prohibited it “from using changes in regulatory rules as a reason to change the terms of a loan” (p. 143)!

That Allison has nothing good to say about regulators doesn’t mean that he absolves “capitalists” of all responsibility for the subprime mess. However, the blameworthy capitalists—including Goldman Sachs, Citigroup, and Countrywide—were, Allison insists, not ordinary capitalists carried by their own sails and assuming their own risks, but rather “crony capitalists” (or, perhaps more accurately, “crony socialists”)—including those deemed “too big to fail” in the event that their risky ventures went south—who owed much of their success, so long as it lasted, to subsidies provided by the FDIC, or the government-sponsored entities, or the Fed, or Congress, including subsidies implicit in being deemed “Too Big to Fail.”

How, then, are further crises to be prevented? Certainly not, in Allison’s opinion, by the Dodd–Frank Act of 2010, whose sponsors were among the chief government instigators of the subprime boom. “How realistic is it,” Allison asks, “to expect that they would identify the cause as their own actions and suggest cures accordingly?” (p. 7). Far from supplying a solution to financial booms and busts, Dodd– Frank “will make problems bigger in the long term” (p. 193) by augmenting still further the powers of some of the very bureaucracies whose decisions made the subprime crisis so severe.

Instead of Dodd–Frank’s 848 pages of financial deckchair rearranging and restuffing, Allison favors uncompromisingly radical reforms. He would avoid excessively easy or excessively tight money by replacing the present discretionary Federal Reserve System with a fully private banking and a currency arrangement based either on a new gold standard or on a Friedman-type fiat-money growth rule. He would curb the moral-hazard problem both by dispensing altogether with a lender of last resort and by eliminating or at least reducing FDIC insurance. He would either privatize or liquidate both FannieMae and Freddie Mac and would close the Federal Housing Administration. Finally, he would have other CEOs embrace the “moral code” upon which he based his own stewardship of BB&T—one inspired by Ayn Rand’s philosophy. The code is simple: a bank’s ultimate concern should be to reward its shareholders and nothing else. But to do that well it had also better steer its

toward economic success and nurture its employees’ self-esteem. If you think such advice either trite or beside the point, perhaps you missed the news about Goldman taking short positions against the very collateralized debt obligations it was hawking to investors, or about how Countrywide fired its own fraud risk management investigator merely for having tried to do her job or about howWells Fargo corrupted its own employees by encouraging them to book “ghetto loans.”

Although Allison’s unapologetic endorsement of Rand’s philosophy might turn off a few readers, the book’s jacket copy, for which Allison presumably wasn’t responsible, is likely to deter many more from even opening the book. The text above the book’s title, itself hardly a model of circumspection, declares that “PURE CAPITALISM is the world economy’s only hope.” That text is in turn surmounted by an endorsement from “Charles Koch, Chairman and CEO, Koch Industries, Inc.” Such festooning isn’t calculated to persuade anyone to the left of, say, Ron Paul, to read on, let alone to buy the book. That’s a shame, for it is precisely such people who are most likely to have—and most in need of having—their beliefs shaken, if not radically changed, by Allison’s testimony. Readers of The Independent Review should find it easy enough either to count such hype as a point in this book’s favor or simply to ignore it. I urge both groups to read the book. Indeed, I urge everyone to buy several copies, destroy the dust jackets, and hand the extras to their more left-leaning friends.
George A. Selgin
University of Georgia
Banking Law and RegulationEconomic PolicyEconomyFree Market EconomicsLaw and Liberty
Subscribe Buy This Issue Get the App