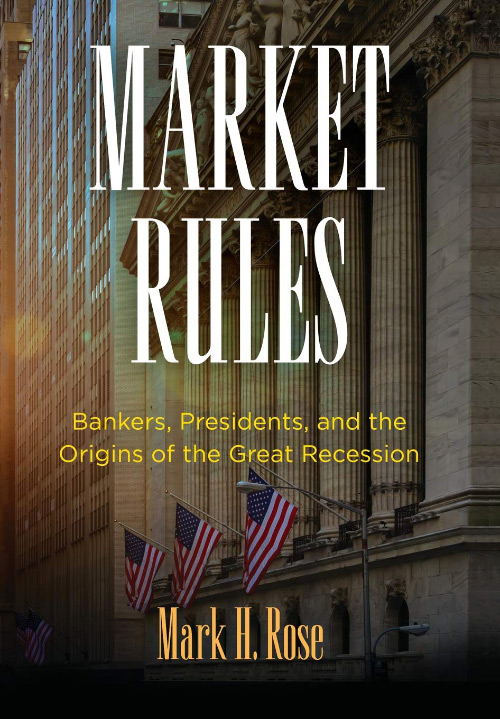 Market Rules
Bankers, Presidents, and the Origins of the Great Recession
Mark H. Rose
Kindle Hardcover
This book review appeared in the Winter 2019/20 issue of The Independent Review.

For Rose, the rhetoric of unfettered markets, competition, and deregulation usually masks the true intention of politicians, regulators, and bankers, who are actually interested in different rules rather than no rules. He dubs this rhetorical bait and switch “market talk.” Presidents from John Kennedy to Donald Trump and the regulators they appointed are at the center of changes to financial regulation since the 1960s. Market Rules focuses on four bankers, three of whom became regulators, who worked to change rules that balkanized the banking industry to rules that supported large multipurpose banks—the so-called supermarket banks common today.

The featured banker of the first chapter is James Saxon of First National Bank, who was appointed comptroller of the currency in 1961 by President Kennedy. According to Rose, Saxon’s actions promoting the growth of banks aligned with Kennedy’s interest in economic growth. Through his description of Saxon’s successes and failures, Rose sets the stage for the tussle between interest groups to follow, describing how a “grinding politics in the form of endless litigation and lobbying emerged as a standard feature of bank politics” (p. 38).

Chapter two focuses on Donald Regan, the banker who helped build Merrill Lynch as it became a prototype of the “supermarket” banks to come. By focusing on Regan, Rose describes the process of regulatory arbitrage between state and national regulators that forged Merrill Lynch. Regan’s second career began in 1981 as Treasury secretary to President Ronald Reagan. As described by George Stigler and applied recently to the financial industry by Brink Lindsey and Steven Teles (The Captured Economy [New York: Oxford University Press, 2017], pp. 35–63), among others, regulatory capture occurs when the regulatory agency is influenced by the industry it is tasked with regulating. Without using the language of regulatory capture, Rose uses the case of Regan and others to show the proximity of industry, regulators, and politicians.

Rose describes interest-group politics that resulted in the regulatory changes of the 1980s. Interests in the insurance industry wanted their turf protected from commercialbank competition, and bankers wanted their turf protected from savings and loans seeking authorization to make commercial loans. The period was characterized by industry interests lobbying for rules to protect their turf or even bail out those in trouble, as was the case for many savings and loans and infamously Continental Illinois, the grandfather of modern bank bailouts.

In chapter three, Rose aptly describes Walter Wriston, the executive who built Citigroup, as a “policy entrepreneur” (p. 82). Wriston capitalized on the idea that the bank’s interests often aligned with the political leaders’ interests. Rose’s account of Wriston’s actions illustrate that a rule-bound environment does not eliminate entrepreneurship but rather channels entrepreneurship to the legal and political arena. To form Citigroup, Wriston took advantage of regulatory changes, won political battles by leveraging coalitions, and benefitted from legal decisions that overruled state-level regulators. Wriston’s political entrepreneurship is similar to the model described by Adam Martin and Diana Thomas (“Two-Tiered Political Entrepreneurship and the Congressional Committee System,” Public Choice 154 [January 2013]: 21–37), in which a political entrepreneur can change rules at various levels of governance—for instance, if state regulations are unfavorable, the entrepreneur can appeal to federal regulators or even the courts.

Chapter four highlights Hugh McColl of North Carolina National Bank, which would become Bank of America under his stewardship. Still constrained by rules limiting the expansion of banks across state lines,Wriston and McColl attempted to win favor by using the rhetoric of markets and expanding access to financial services to underserved communities. However, Rose notes that their rhetoric shifted away from supporting markets once competition threatened their banks. Despite changes that increased bank efficiency, promoted access to credit, and increased economic growth, these bankers’ political engagement embodied the zero-sum unproductive entrepreneurship described by William Baumol (“Entrepreneurship: Productive, Unproductive, and Destructive,” Journal of Political Economy 5 [1990]: 893–921).

Years of changing the restrictions that limited supermarket banks culminated in the 1990s with a merger between Citibank and Sandy Weill’s Travelers Group as well as in major legislation. But in chapter five Rose argues that the narrative of ideologically motivated deregulation of banking and finance in the 1990s misses the political economy. Bankers, regulators, and politicians, far from being ideologues, shifted their positions on bank regulation as interest groups shifted. Further, bankers and the insurance industry were not the only interests engaged in turf battles. Rose characterizes regulators at the Federal Reserve and the comptroller’s office as vying for regulatory authority. In Rose’s words, “bank politics consisted essentially of just such a zero-sum struggle” (p. 114).

Chapter 6 introduces financial products such as subprime lending and the development of mortgage securitization during the 2000s. Rose emphasizes a culture focused on bank expansion and economic growth in the lead-up to the financial crisis. Rose gives only a brief treatment of the financial crisis in 2007 and 2008 rather than rehashing it in detail. The chapter closes with a return to the fraught bank politics and the Troubled Asset Relief Program of 2008. In chapter seven, Rose describes bank politics in the wake of the crisis. Public opinion of banks and markets changed because of the crisis, a change that helped to pass the Dodd-Frank Wall Street Reform and Consumer Protection Act of 2010. The new rules certainly added constraints on large banks, but Dodd-Frank contained a set of rules that maintained the status quo of large banks at the core of the U.S. financial system. Rose describes the wrangling between various agencies for authority to regulate and the lobbying by banks small and large for special treatment under the new law.

Market Rules closes with an epilogue that reminds the reader that the history of bank politics is also the future of bank politics. The so-called market talk and the turf battles among regulators and bankers alike play out in the political arena.

Regardless of the president or the decade, Rose documents the rhetoric of fostering economic growth by allowing the creation of larger banks. Efforts to change the rules of the game are met with resistance, but over time the coalition of presidents and bankers have prevailed. Though Rose does not use this terminology, his framing fits the “bootlegger and Baptist” theory of regulatory change in which a coalition forms between an interest group with a morally appealing reason for the regulatory change (i.e., markets and prosperity) and an interest group with a financial interest in backing the regulatory change. (For a modern application of this theory, see Randy Simmons, Ryan Yonk, and Diana Thomas, “Bootleggers, Baptists, and Political Entrepreneurs: Key Players in the Rational Game and Morality Play of Regulatory Politics,” The Independent Review 15, no. 3 [Winter 2011]: 367–81.) Throughout the book, Rose presents historical accounts similarly ripe for public-choice analysis.

Throughout Market Rules, Rose assumes that presidents, regulators, and even bankers wanted faster economic growth. The assumption of economic growth as a motivation is useful shorthand for the motivations of presidents and regulators that allows a broad story to be told about the historical roots of regulation. But Rose applies this assumption too liberally; after all, Market Rules also describes multiple occasions in which presidents and regulators acted to limit bank growth or channel resources to a segment of society, most likely at the expense of economic growth. But application of this assumption does not undermine his historical account; in fact, the simplification leaves an opportunity for scholars of public choice to build on the historical foundation that Rose has built.

Many accounts of the financial crisis of 2008 are either a history of financial crises or a narrative focused narrowly on a regulatory rule deemed responsible for the crisis (for instance, see Anat Admati and Martin Hellwig, The Bankers’ New Clothes: What’s Wrong with Banking and What to Do about It [Princeton, N.J.: Princeton University Press, 2014], pp. 81–99). The greatest contribution of Market Rules is its account of more than fifty years of the politics of financial regulation leading up to the financial crisis.

Market Rules holds the reader’s attention by telling a story of high-profile bankers and regulators and the role they played in shaping the rules that govern modern banking and finance. With no axe to grind and no policy recommendations to push, Rose provides a dispassionate interpretation of the roots of the rules governing banking and financial markets. Whether you are interested in the roots of the financial crisis or in the political economy of the financial industry, Market Rules is recommended reading.