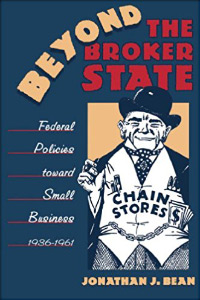 The week of June 2 to 6, 1997, was designated National Small Business Week. One newspaper article noted that 96 percent of all U.S. businesses are classified as small businesses and that “the message is clear: small business is a big deal.” Jonathan J. Bean can well attest to that. In Beyond the Broker State: Federal Policies Toward Small Business, 1936-1961, he describes the development of the federal government’s policies toward small businesses from the Great Depression through the Eisenhower era. Bean discusses the political process that led to two significant laws—the Robinson-Patman Act and the Miller-Tydings Act—and finally to the Small Business Administration.

According to Bean, the rise of the federal government’s concern with small businesses has several roots. A very loosely connected root can be traced back to Jeffersonian Agrarianism. Another root comes from the concern with the growth of “big” business and the development of the antitrust laws in the late nineteenth century. A third root is found in the egalitarian ethic that is part of the American tradition and found expression in the permanent federal income-tax law passed in 1913. These ideological roots combined with the crisis of the 1930s and “political entrepreneurship” to give rise to federal intervention on behalf of small businesses. One of the leading advocates of federal intervention for small business was Representative Wright Patman (D.-Tex.), and the various sources can be seen in Patman’s statement that “The wide distribution of economic power among many independent proprietors is the foundation of the Nation’s economy. Both Franklin and Jefferson feared that industrialization would lead to a labor proletariat without property and without hope” (p. 5). In the view of Patman and others, a strong and thriving small-business sector provided protection against a concentration of power.

The initial response in the mid-1930s was enactment of the Robinson-Patman Act and the Miller-Tydings Act. When the former was passed in 1936 its sponsors declared it to be the “Magna Carta” of small businesses. In fact, it was framed with small, independent retail businesses, not small manufacturing in mind. Both acts grew out of the anti-chain-store movement of the 1920s and 1930s and were aimed at preserving small, independent retail businesses against the rise of retail chain stores. Initially there was a call to amend the antitrust laws to allow manufacturers to fix minimum retail prices and reduce or eliminate the chain stores’ advantages. By the early 1930s states were beginning to impose taxes on chain stores. Though chain-store critics had called the situation a “crisis” for years, it took the real crisis of the Great Depression to get national anti-chain-store legislation. The Robinson-Patman Act of 1936 required manufacturers to justify discounts to chain stores in an attempt to limit or eliminate such discounts. The 1937 Miller-Tydings, or “Fair Trade,” Act allowed manufacturers to specify the minimum retail price of a product “in order to protect small retailers from the price competition of the chain store” (p. 42).

The framework Bean adopts to explain this and subsequent small business legislation is crisis, ideology, and political entrepreneurship. As mentioned already, many Americans had an ideological predisposition toward small business, considering it the “backbone of democracy.” In times of real crises political changes at the federal level could be initiated. The Great Depression, World War II, and the Korean War constituted such crisis periods when action on a small-business agenda could be pushed forward. The third element of this triad was “political or ideological entrepreneurship.”

Other theories have been proposed to explain the growth of government in the twentieth-century United States. The Progressive explanation argues that politicians expanded government to provide for the disenfranchised population. As Bean notes, however, “the Progressive interpretation failed to explain why corporate executives had so much influence on the formulation and administration of Progressive legislation” (p. 6). The “broker-state” model maintains that policymakers brokered between competing interest groups seeking government assistance. Bean identifies “corporate-liberal,” “pluralist,” “neopluralist,” “public choice,” and “neo-Marxist” versions of the broker-state model. He contends that the broker-state model of the welfare-regulatory state’s growth in the twentieth century tends to ignore the role played by policy entrepreneurs and that this role is especially important in the development of small-business legislation.

Bean makes a convincing case that, at best, support from small businesses for federal intervention was narrow rather than widespread. However, policy entrepreneurs such as Wright Patman, Joseph Robinson, John Miller, and Millard Tydings listened to pleas from some individuals and specialized small-business interest groups and responded to them. Neither bill had the kind of impact its supporters anticipated. The Robinson-Patman bill turned out to be ambiguous, and it accelerated franchising as a means of avoiding its reach. The FTC’s enforcement also took some of the teeth out of the bill. The Miller-Tydings bill did not include a nonsigner clause until the McGuire Act of 1952 and received lackluster state enforcement. Fair trade continued to fall into disuse in many industries, and in 1975 Congress repealed the Miller-Tydings Act.

The Second World War brought a new “crisis” and a new opportunity for the promotion of small businesses. This time, however, small manufacturing firms were the objects of solicitude. Critics argued that the federal government’s contracts for war materials production favored big businesses, as did labor shortages and price controls. The 1942 Smaller War Plants Corporation Act (SWPC) was to correct this imbalance. Though the SWPC brought about few changes, surveys showed that small manufacturers enjoyed wartime prosperity and few of them complained. Unable to develop a small business constituency, the SWPC expired in 1946.

A new crisis, the Korean War, allowed political entrepreneurs to guide into existence new legislation for small manufacturers. In 1950 the Smaller Defense Plants Administration (SDPA) was established. It too, was ineffective. The Reconstruction Finance Corporation (RFC), one of the largest agencies in the federal government, had survived the Second World War, but tales of its misconduct increased. The new Republican Congress took aim at eliminating the RFC. As the expiration date for the SDPA loomed, a compromise was reached. A Small Business Administration (SBA) was created to assume the roles previously played by the RFC and the SDPA. During the Eisenhower administration the SBA had little effect except as a patronage tool for the Republicans, but the legislation was renewed in 1955, and in 1957 the SBA was given permanent status. The SBA remained a marginal player because of limited funding from the Eisenhower administration and Republican control of the SBA’s Loan Policy Board. After John F. Kennedy’s election the SBA began to grow, and it has continued to do so. Bean notes that “by the 1980s, the agency was guaranteeing nearly half of the intermediate and long-term credit extended to small businesses” (p. 160).

Bean has given us an important account of how this frequently symbolic small-business legislation came into existence. He shows that the legislation did not have the desired effect, nor was it generally sought by small businesses. The continually repeated and exaggerated warnings of the coming disaster for small businesses were not just premature; they ignored the continuing strength of the small-business sector in the United States. Bean supports his thesis about the importance of “political entrepreneurs” well, thereby explaining how such legislation could come into existence without strong interest groups to foster it.

These questions may be material for an additional book, as no one can fault Bean for not extending his research into the post-1961 years. Overall he has done us a great service by dissecting the development of federal policies toward small businesses from 1936 to 1961. His book is excellent, and I heartily recommend it.