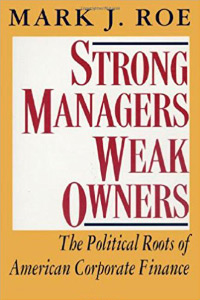 Diffuse stock ownership is the rule for large American corporations. It is rare to find a single shareholder with even 10 percent of the stock of a Fortune 500 company. As a result, shareholders have little incentive or ability to affect corporate policies if they disagree with management: managers are strong and owners are weak. Economists have long been concerned about the possible maladies of this condition, most notably that the corporation might be run to advance the interests and ambitions of its executives rather than to generate value for its stockholders.

Fragmented ownership is commonly thought to be the inevitable consequence of corporate evolution. Scale economies make it efficient for firms to grow large. Their capital needs eventually expand beyond the resources of individual investors, either because no single investor has enough resources to fund the operation or because individual investors desire diversification and do not want to put all their eggs in one basket. Thus, modern economies appear to face an unsavory tradeoff between efficient firm scale and efficient shareholder control.

Mark Roe’s impressive book, Strong Managers, Weak Owners, suggests that such a tradeoff may be illusory. Turning received wisdom on its head, he argues that diffuse ownership is not an inevitable consequence of corporate evolution. Rather, in the United States it is the result of a series of political choices over the last century. His argument runs on two tracks. First, he pinpoints the precise laws and regulations that have impeded the formation of large stockholding blocks and, second, he discusses corporate governance in Germany and Japan, where the laws are different and large blockholding is common.

The conventional explanation of fragmented ownership is at least partially correct–few individuals could come up with the $386 million necessary to buy 1 percent of General Motors (as of February 1996)–but it is incomplete: financial institutions such as banks, insurance companies, mutual funds, and pension funds have the resources (combined assets of $11.8 trillion in 1993) to buy large blocks. Why don’t they?

Roe’s answer is that the United States has created a virtually impenetrable wall of legal obstacles. The core of the book is a careful discussion of these obstructions, including the following: commercial bank sizes were limited by antibranching laws and deposit insurance, and banks were virtually prohibited from equity ownership by the National Bank Act, Glass-Steagall, and the Bank Holding Company Act of 1956; equity ownership by insurance companies was severely limited by New York regulations; mutual funds were pushed to hold fragmented portfolios by tax laws, and short-swing trading rules made passive investment advantageous; ERISA made management control of pension funds desirable, and managers are unlikely to use large blocks to exert pressure on their fellow managers; and corporations are inhibited from cross-holdings by dividend taxes.

The book leaves no doubt that a variety of legal hurdles stand in the way of large blockholding. But they are not insurmountable. Bank holding companies can put 5 percent of their assets into stock (Wells Fargo holds over 1 percent of GM); New York life insurance companies can place 20 percent of their assets in equity, and casualty insurance companies such as Berkshire Hathaway can put even more; mutual funds can invest up to 3 percent in a portfolio firm and still be legally fragmented; public pensions are fairly unrestricted; and so on. How do we know that the hurdles really explain diffuse ownership? The most compelling evidence Roe provides is the observation that blockholding is the rule in Germany and Japan. Banks were not split by Glass-Steagall in Germany, and often take big positions in large firms. The keiretsu system in Japan involves banks and vertically related companies in cross-holding relationships. These observations alone make the case that fragmentation is not inevitable. They do not prove, however, that U.S. fragmentation is caused by the legal environment. Indeed, the book notes that diffuse ownership is also common in Great Britain, where financial institutions do not face American-style legal impediments. It may be that diffuse ownership arises from deeper economic factors having to do with the economic function of corporations, financial intermediaries, and so on. It will take more research to determine for sure.

Roe’s ideas about political economy are even more intriguing. If we accept the notion that American fragmentation was caused by American laws, the natural question is, Why were such laws adopted in the United States and not in Germany or Japan? What is the political economy of fragmentation? Roe offers three possibilities. First, the configuration of interest groups may have been different in the United States. For example, there may have been more small banks that benefited from laws limiting the size of big banks. But he concludes, plausibly I think, that it is hard to identify enough groups with an interest in fragmentation to make this story convincing. (Roe suggests that corporate managers benefit from fragmentation, but this is not clear to me. There is little evidence that managers were involved in creating the fragmentation laws. I suspect that every American manager who extols the virtues of fragmentation could be matched by one from Germany or Japan who sees the advantages of large blockholdings.)

Roe’s second political hypothesis is that the geographic nature of political representation in the United States produces a bias toward fragmentation. For example, if 434 congressional districts each have one small bank, and the 435th district (New York City) has three huge banks, the vote will be 434 to 1 in favor of laws that restrict the power of large banks. In contrast, Germany elects its parliament by party, not by region, and Japan has a system that is only loosely regional. Whether this hypothesis holds water theoretically and empirically requires more work, but it has enough surface plausibility to merit additional investigation.

Roe’s third hypothesis is that the United States has a dominant political ideology opposed to concentration of economic power. The rhetoric of politicians, regulators, and journalists provides plenty of evidence. Neither Germany nor Japan (nor, I suspect, any other industrialized country) has laws fragmenting financial institutions and preventing horizontal expansion by corporations like those in the United States. But the introduction of ideology to explain the difference in fragmentation has the feel of a deus ex machina; where does this ideology come from? Why is it present in the United States and not elsewhere? How might we measure it? At this point, it is no worse an explanation than arguing that the differences in ownership across countries arise from some unspecified “technological” factors, but neither view has enough empirical support to be persuasive.

In a book self-described as “suggestive” and intended to point out new avenues for research, it might seem strange that the last five chapters are devoted to policy recommendations. How can we make policy in such a state of ignorance? Nevertheless, Roe’s suggestions are eminently sensible. His basic argument is that because we know less than we thought about the causes of fragmentation, and observation of other countries indicates that the costs of concentration are not too high, good policy would be to allow institutions more flexibility in ownership structures. Roe suggests we should relax existing laws and allow competition among governance forms. This relaxation would allow corporations to adopt the ownership structure that suits them best, and would generate more information about the benefits and costs of different structures. The other general policy prescription concerns securities law. In the current legal environment, it is possible for individual institutions to accumulate significant minority blocks of a firm’s stock, but not enough to exercise control without the help of other stockholders. However, communication between such stockholders could easily run afoul of securities law. Roe suggests, again quite reasonably, that these rules be relaxed to allow blockholders to coordinate their actions.

The ultimate value of a book such as this is measured less in the questions it closes than in the ones it opens. Roe has shown convincingly that much of what we thought we understood about corporate governance was wrong. Fundamental questions need to be revisited, and the political roots of fragmentation examined. By laying out a road map for this important endeavor, Roe’s book promises to serve as an influential stepping-off point for thinking about the modern corporation for years to come.

John G. Matsusaka
University of Southern California
Banking and FinanceBanking Law and RegulationBusiness and EntrepreneurshipEconomyLaw and Liberty
Subscribe Buy This Issue Get the App