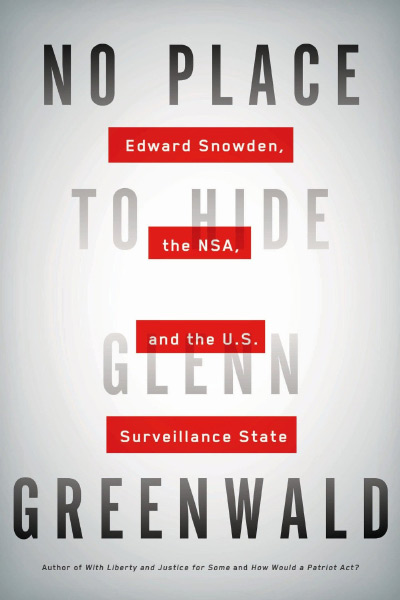 No Place to Hide
Edward Snowden, the NSA, and the U.S. Surveillance State
Glenn Greenwald
Kindle Hardcover Paperback Audiobook MP3 CD
This book review appeared in the Spring 2015 issue of The Independent Review.

Edward Snowden might claim to be a patriot because he tried to restore integrity to U.S. intelligence. What he actually did was reveal how far state-sponsored surveillance has metastasized beyond its sole legitimate mission: to protect U.S. citizens from external threats.

Of course, the problem with acts of terrorism is that prosecuting perpetrators after the fact concedes the initiative. Thinking that someone might commit a crime is not probable cause. Actual intent and specific steps leading toward acting on that intent are necessary for an arrest to be justified.

But how can surveillance officials know about intent and acts unless they are looking? Worse, if terrorists are willing to commit suicide in the act of killing American citizens, then the threat of ex post sanctions is no deterrent in the first place. The only way to fight terrorism is to prevent acts of murder and destruction before they happen.

That would require an elaborate system of gathering information and projection of likely threats. Government officials, like the police in the Tom Cruise movie Minority Report (Steven Spielberg, 2002), are put in the position of predicting crimes and then arresting the nonperpetrators before the fact. In one exchange, the police force’s “predictor in chief” and the Tom Cruise character, Danny Witwer, debate the system:

JOHN ANDERTON: Why don’t you cut the cute act, Danny boy, and tell me exactly what it is you’re looking for?

JOHN ANDERTON: There were no successful acts of terrorism on American soil for nearly twelve years after 9/11. There’s nothing wrong with the system; it is perfect.

Now, yes, I edited that. I changed “murder in 6 years” to “successful acts of terrorism on American soil for nearly twelve years after 9/11.” But the analogy is apt: aggressive ex ante surveillance and enforcement is being justified in the United States based precisely on the absence of crimes. It’s like the old joke about elephants: “Elephants hide in trees.” “No way! I’ve never seen one.” “See how well they hide?”

When asked in an online forum about his justification for blowing the whistle, Snowden said, “There can be no faith in government if our highest offices are excused from scrutiny—they should be setting the example of transparency” (“Edward Snowden: NSA Whistleblower Answers Reader Questions,” Guardian, June 17, 2013)

On May 20, 2013 (Was it really less than two years ago?), Snowden flew to Hong Kong. Over the next three weeks, he met with several journalists and arranged to transfer a variety of materials (written notes, databases, and videos) to several news outlets. Most of what appeared in traditional “news” format was published by the British newspaper the Guardian, but a blizzard of information, much of it in dispersed and hard-to-understand form, was strewn across various sites on the Internet.

One of the journalists who met first with Snowden in Hong Kong was Glenn Greenwald. His book No Place to Hide shows its virtues as its central flaws. Or perhaps its flaws are its virtues. The book is in part a narrative, first-person history of the events leading up to the disclosure of a massive amount of intelligence material and in part an attempt at objective assessment of the impact and ethics of that disclosure.

The story of the “contact,” where Snowden first reached out to a few journalists, is terrific, an exciting minispy story all in and of itself. Who, after all, would believe this absurd yarn? The first attempts at connection were cloaked in secrecy and paranoia and alleged an overreach so broad and so extensive that it simply had to be a hoax. But, as eventually revealed, whatever it was, it was not a hoax.

Greenwald describes the “ten days in May” when he came first to suspect and then to believe firmly that Snowden was substantially telling the truth. Worse—or better, depending on your perspective—Snowden really was intent on dumping an enormous trove of data, voice recordings, and documents onto Internet sites in hopes that the information would be widely distributed. Snowden’s explanation for why he felt that he could and in fact must reveal what the U.S. surveillance program was doing reflects a basic truth about the power of the state. Snowden had hoped that the abuses he saw were simply a product of bad people or of temporary bad policies. He had believed, a bit pathetically in retrospect, that the inauguration of Barack Obama in 2009 would at least start to change things for the better.

This hope for change proved fruitless. Snowden told Greenwald, “It became clear that Obama was not just continuing, but in many cases expanding these abuses” (qtd. on p. 43). Snowden decided to leak National Security Agency (NSA) secrets on the theory that this could be done in a way that limited damage to individuals engaged in covert operations but at the same time exposed systems. It is not clear that this line was nearly as bright as Snowden imagined, but that distinction became the boundary of what he resolved to expose and what to conceal.

After telling the story of the events leading up to the massive disclosure of records and information, Greenwald describes the frantic events in the aftermath. For a supposed evil mastermind, Snowden had not thought through very clearly what he was going to do when he was exposed as the leaker/traitor/whistleblower (depending on your perspective, and perhaps the categories are not mutually exclusive). The atmospherics of being trapped in the Moscow airport for thirty-nine days— reenacting the Tom Hanks movie The Terminal (Steven Spielberg, 2004)—and then seeking asylum in Russia did not help his credibility much. And the return of Russia to tensions bordering on hostility with the United States haven’t helped either. Pro tip: play your end game before you make the first public move.

At this point, Greenwald switches gears, changing from an account of historic events in which he was a direct and important participant to a description of the broader context and his interpretations. There is nothing wrong with this part of the book, examining in one chapter the nature of surveillance and its corrosive effects on trust in a democracy, and then considering the press’s partly antagonistic and partly cooperative role. But such social commentary is of necessity different—in authoritativeness if nothing else—than the first-person perspective of the first two-thirds of the book. The combination of the first-person journalistic portions of the book and the social commentary portions is a little incongruous but is well enough done on its own to make the juxtaposition defensible.

Greenwald also does a useful thing that might plausibly be done by a large set of authors whose notes, sources, and index are voluminous. There is no particular reason to have these source materials actually printed in the book, so Greenwald has made the material—far more material and in greater detail than would have been possible to include in the book—available online. Someone without an Internet connection and usable smart device might find this approach frustrating, but the benefits, such as electronic searches and greater volume and variety of source materials, easily outweigh the (admitted) costs.

In the end, my own view (even after reading Greenwald’s fairly sympathetic account) is that the accusations of treason made by those embarrassed by Snowden’s “whistle-blowing” cannot simply be dismissed. At best, Snowden was faithless, exploiting his trusted status to obtain access to secret information, which he then revealed to the world. It may be true that, as he claimed, the information he revealed was much less damaging than what he chose to keep to himself. That’s not his choice to make, however, given his security clearance. He promised not to reveal anything.

What Snowden was, and remains, is subversive. Subversion can never be patriotic, at least not in terms of the state as it is. Snowden subverted an implicit consensus that any privacy price paid in the name of security is justified by “our” need for security. As he put it in an online chat hosted by the Guardian, “Bathtub falls and police officers kill more Americans than terrorism, yet we’ve been asked to sacrifice our most sacred rights for fear of falling victim to [terrorism].” (“Edward Snowden: NSA Whistleblower”).

Snowden subverted a consensus that was the product of ignorance rather than a conversation about the level of surveillance the American public was willing to consent to. The companies Snowden worked for after he left the CIA, first Dell and later Booz-Allen, are being paid a fortune to spy on Americans. Snowden felt that Americans should know how this tax money is being spent and the extent of direct state intrusion into communications and private information. There is no pretense of due process or probable cause as limits on this data collection.

There have been three responses to the Snowden revelations. First, we were told that none of this surveillance (in particular the PRISM program) was actually happening and that the overreaction from the media and libertarian groups was just a paranoid fantasy. This claim forced the NSA director into the embarrassing conjoining of two responses: We have now stopped collecting this information, which we never collected at all.

Second, craven apologists for the state surveillance machine—such as Senator Dianne Feinstein of California—fell back to a prepared defensive position, essentially the old McCarthyist line: There is no harm in collecting the information; if you are not guilty, you have nothing to fear. But that position is even more subversive than Snowden’s revelations. If Snowden is not allowed to decide what information to reveal without permission, the state is not allowed to decide what private information to collect without probable cause and the due process guaranteed by the Fourth Amendment.

Finally, and most chillingly, Snowden’s critics have offered the tyrant’s excuse: necessity. Such surveillance is unavoidable, they claim: it can’t be helped; there is no alternative. It is going to be done because we can. There is no higher value than protection against terrorism. This is the defense that Snowden’s revelations most thoroughly undermined because the breadth and detail of the information being collected is not necessary; it does not have to be done.

If Snowden’s act was not patriotic, then neither was it treasonous, at least not in the usual sense. For one thing, Snowden did make some effort to safeguard information that, if revealed, would have done substantial harm to direct U.S. security interests. The success of these efforts at the margin is debatable, but it is now clear that much of the damage done was to the personal reputations of diplomats and officials who were arrogant and contemptuous of other governments and national leaders. Further, for subversion to be treasonous, the acts of government being subverted have to be worthy of our loyalty and consistent with our values. What Snowden did was faithless; he broke a promise and endangered people who were doing nothing more than obeying civil authority. Why did he do it? Here is his explanation: “I don’t see myself as a hero because what I’m doing is self-interested: I don’t want to live in a world where there’s no privacy and therefore no room for intellectual exploration and creativity” (“Edward Snowden: NSA Whistleblower”).

The U.S. Empire has not come crashing down in the aftermath of the Snowden revelations. It seems we can handle the truth. But without Edward Snowden and without careful and fair-minded accounts such as the one Glenn Greenwald provides in this book, we still wouldn’t know the truth. When revealing an unconstitutional assault on privacy is seen—rightly—as subversive, citizens need to rethink the importance of limits on the state. The government we deserve and the only one we consented to is one small enough to fit inside the Constitution.