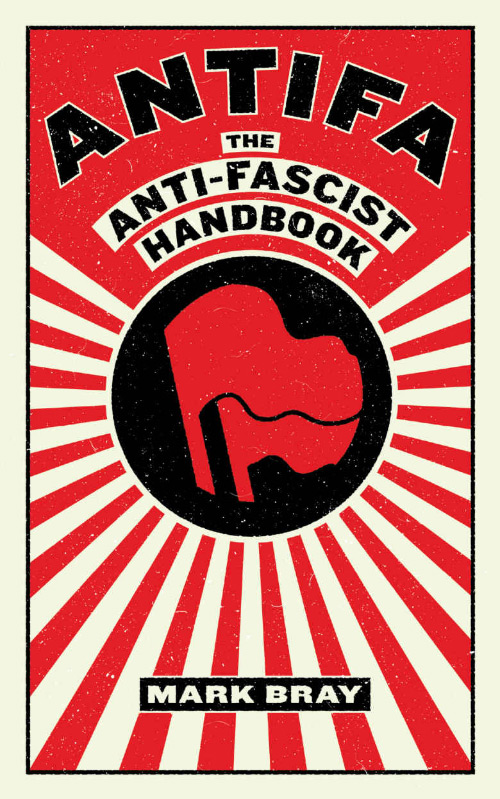 Antifa
The Anti-Fascist Handbook
Mark Bray
Kindle Paperback Audiobook MP3 CD
This book review is a web exclusive for the Winter 2020/21 issue of The Independent Review.

Mark Bray’s book, Antifa: The Anti-Fascist Handbook, is having a moment. Keith Ellison, the Attorney General of Minnesota, tweeted a picture holding the book he claimed would strike fear in the heart of Donald Trump. Bray, a history instructor at Rutgers, studies civil unrest and anarchism, but he isn’t just a historian. He is a true believer. He “occupied” at the Occupy Wall Street protest. The Chronicle of Higher Education dubbed him “The Button-Down Anarchist.”

The first three chapters of Antifa is a sympathetic history of anti-fascist protest in Europe. As an ethicist, I’m not qualified to say whether his history of European Anti-Fascism is accurate or fair. However, intellectual historian, Paul Gottfried has argued that Bray is engaged in a kind of mythmaking when he traces the strong connection between European anti-fascism of the 30s to today’s Antifa. Bray’s historicity is important, however, because he uses it to make a moral argument: Fascism is so horrible that we should do anything to stop it, and the escalating violence embraced by Antifa works.

Antifa is an ideology more than an organization. There are antifascist organizations like SHARP (Skin-heads Against Racial Prejudice) and the ARA (Anti-Racist Action) but Antifa itself is more like the hacker collective, Anonymous. Anonymous and Antifa are collective because the like-minded get together and act based on a shared ideology about the dangers of fascism loosely defined as racism, sexism, discrimination, etc. They are autonomous because there is no central authority, no leadership, member lists, or official actions.

My target is not, however, Antifa as a movement. There are plenty of good analyses on that. Rather, Bray’s apologetic for Antifa is important apart from how the movement itself develops. This moral apologetic for Antifa begins in earnest at chapter four “Five Historical Lessons for Anti-Fascists.” What follows are three chapters morally justifying Antifa’s tactics.

Bray wants his book to serve as a guide to how Antifa in America defines itself. Since Charlottesville, the movement has garnered some significant publicity because Antifa gets violent, destroys property, and disrupts business. It’s easy to relegate Antifa to the status of violent revolutionaries, and most hard-core Antifa supporters would welcome the claim. Before I criticize Bray, however, I think it is important to recognize there is an argument here—an attempt to justify the violence. I think it's a poor argument and unsuccessful, but we cannot assume that Antifa is nothing more than a mob of angry young militants who want to watch the world burn. It has those elements, but Bray is not just emoting. Anti-fascists may be reluctant to engage in reasoned appeals, but their apologist does.

I would summarize Bray’s Antifa apologetic in three claims: 1) The consequentialist appeal. Fascism is so horrible that we must fight it by any means necessary before it’s too big to fight. 2) The Slippery Slope Response about Antifa leading to a war on mainstream political ideas. 3) The Socialist Requirement. Bray makes clear Antifa stands not just against fascism, but for far-left ideas of Socialism, Marxism, and Left Anarchism.

The appeal is emotional, and the argument is consequentialist. Without violence, fascism will take over. If we take Bray at his word, Antifa faithful believe they are the only line of defense against fascism. Bray’s warnings often stray into radical hyperbole. For example, status and conditions on some Native American reservations are awful, but Bray calls them “concentration camps.”

There is a stark pragmatism in Bray’s argument. He claims that historically, liberal institutions such as free speech and democratic discourse could not stop fascism but anti-fascist organizing and violence have stopped it. Second, he makes a moral argument that violent protest is a kind of self-defense. I will have more to say about the first claim later, but the second one is important for us to understand Antifa. “Anti-fascists challenge conventional interpretations of self-defense grounded in individualistic personal ethics . . . antifascists don’t wait for a fascist threat to become violent before acting to shut it down” (p. 169).

If I read Bray right, tearing down statues, destroying property, and punching Nazis before they can garner appeal is preemptive self-defense. Two terms that might not mesh well. Heaven help the person who gets falsely accused of engaging in fascist behavior but they aren’t fascists. Their jobs, their reputations, and their sanity could become collateral damage where the value of social justice swamps any of what Bray called individualist ethics.

Bray considers the objection that a violent anti-fascism will lead to a kind of tyranny where Antifa goes after anyone with whom they disagree. Bray’s response is that anti-fascist organizing is not a threat to society because it dissipates when fascism does. “If we take a look at the track record of anti-fascism, however, a consistent pattern emerges that is so familiar to anti-fascists that it’s annoying: When local fascist organizing declines, so does local anti-fascist organizing” (p. 157). He cites Rory McGowan of Anti-Racists Action “when there is no visible or active Nazi presence, ARA groups fall into a state of inactivity . . . If anti-fascism is just about silencing those holding ‘alternative points of view’ over the past hundred years we should see some tangible examples of Antifa groups sliding down this slope.” Instead, Bray claims “the historical record points in the opposite direction” (p. 157).

One could verify or falsify this claim with some data. Indeed, such a claim cries out for verification. Bray however dismisses the worries about a slippery slope by mere assertion, as if the claim were self-evident. So I will do the same: recent events (not to mention social psychology data) would argue against Bray’s claim. When protesters go after confederate statues and wind up toppling Frederick Douglass, when one can’t utter James Baldwin’s own words in a classroom, one wonders if cancel culture isn’t exhibit A for skepticism, at the very least, when Bray tries to allay our fears about revolutionary overreach.

Antifa is not merely anti-fascism. It is explicitly on the side of socialism and Marxism. Bray does not side even with left-liberalism. In fact, liberalism and its institutions along with capitalism are soil where fascism grows. Consider the liberal institution of free speech. Bray has an entire chapter dedicated to the problem of “no platforming” (disrupting any speakers deemed fascist). Bray does not even pay lip service to free speech: “In my opinion, ‘no platforming’ fascists often infringes upon their speech, but this infringement is justified for its role in the political struggle against fascism” (p. 153).

Even though Bray assures us that Antifa won’t go after the closest right-ward ideology, he just can’t help blazing his anarcho-socialism that makes it hard not to dismiss his assertion. “Anti-fascists are, simply, revolutionaries. It’s surreal to watch liberal pundits lambast anti-fascists . . . when [anti-fascist’s] ideology advocates global expropriation of the capitalist ruling class . . . If they are critical of ‘no-platform’ wait till they hear about class war” (p.159). Somehow, I don’t think class war will differ all that much from Antifa’s violence toward white-supremacists.

Bray’s argument is a very thin argument. It relies on the revolutionary ends, justifying the violent means. But what should terrify us is that “by any means necessary” is not in response to a looming threat but anticipation of it. Pre-emptive self-defense. If any Antifa faithful follows Bray’s logic, any hint of racism, sexism, transgender phobia, or nuanced critique of Antifa tactics might just be inchoate fascism in embryo. Once that determination is made there is no reasoning about getting it right. The first line of the Anti-fascist handbook is “Fascism is not to be debated, it is to be destroyed.”

So imagine how this refusal of even minimal liberal norms of discussion intersects with our call-out/cancel culture: Suppose Bobbie doesn’t say something in response to an example of blatant injustice for many innocent reasons (e.g. Bobbie thinks tweeting “Black Lives Matter” along with everyone else is a cheap way to fight injustice). The cry of “Silence is violence” assaults Bobbie the celebrity because silence is complicity with fascism. Someone else labels them a racist, fascist, homophobe, etc. This accusation gets retweeted a bazillion times. It’s not true but the end justifies the means. Can’t make an omelet without breaking a few eggs. Ardent anti-fascists shutdown any attempt to engage in a reasoned discussion about Bobbie’s false label. You abolish fascism, you don’t debate with it.

This isn’t hypothetical. Just ask Peter Weinberg, who saw his life threatened and calls for his firing because he fit the description of a man who did violence and tore down Black Lives Matter signs. When the Maryland Attorney General tweeted asking for help to find Weinberg, he got 50,000 retweets. When he apologized and exonerated Weinberg, he got 228 retweets.

Bray may argue that historically Antifascist organizing doesn’t go after less radical right-wing ideology. However, it’s cold comfort when, as Matt Taibbi so eloquently puts it, “Twitter Robespierres ... move from discipline to discipline torching reputations and jobs with breathtaking casualness.” (“The American Press Is Destroying Itself”) Even if the hard-core bandana wearing revolutionary organizers fade when fascists duck back into their spider holes, what about all the unorganized wannabes who aren’t so nuanced? The ones pulling down statues without regard to any rational history. The woman who tweeted Weinberg’s address said that “In all of her eagerness to see justice served, she was swept up in the mob that so gleefully shared misinformation, depriving someone of their own right to justice.” The social ethic swamped the individual ethic. Her apology was retweeted about a dozen times.

Bray’s Antifa apologetic makes violence inevitable because it admits no fallibility and forestalls any correction. One good thing that may come out of Bray’s argument is a renewed concern in one of John Stuart Mill’s least appreciated arguments for unregulated expression of thought and sentiment, that anyone, especially those caught up in revolutionary fervor, are not infallible.

J. K. Miles
Quincy University
Civil Liberties and Human RightsDefense and Foreign PolicyLaw and LibertyPhilosophy and ReligionPolicingSocialism, Communism, and CollectivismTerrorism and Homeland Security
Subscribe Buy This Issue Get the App