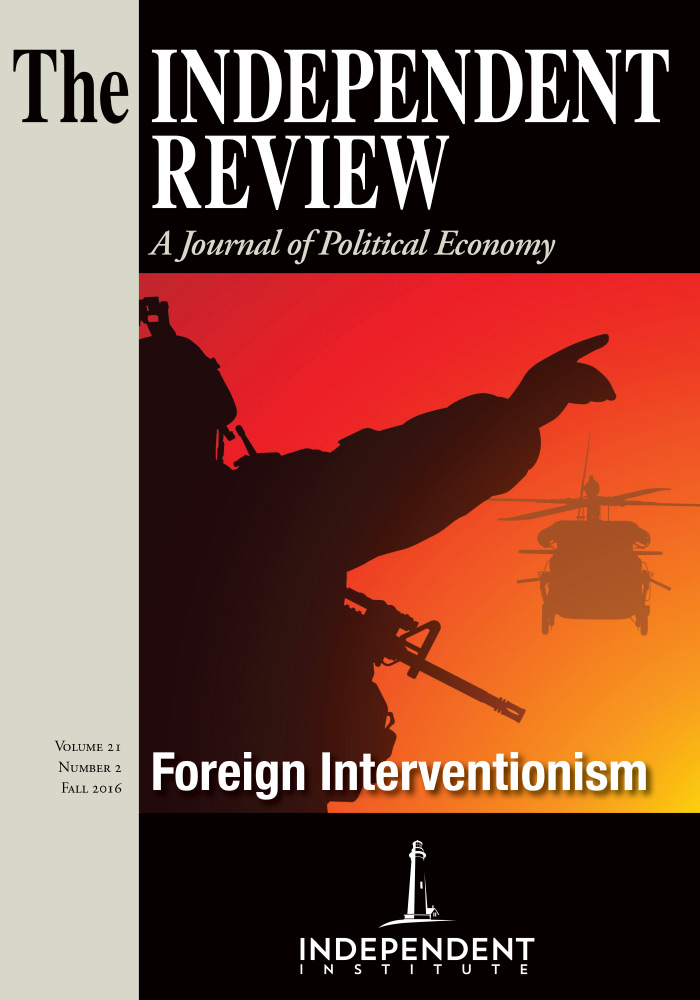 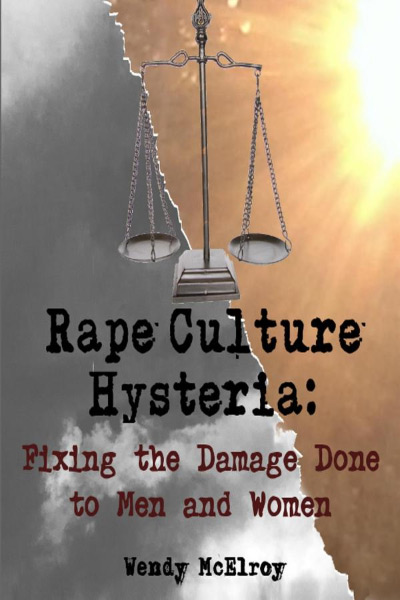 Rape Culture Hysteria
Fixing the Damage Done to Men and Women
By Wendy McElroy
Kindle Paperback
This book review is a web exclusive for the Fall 2016 issue of The Independent Review.

Wendy McElroy, author, libertarian feminist and a victim of rape and domestic violence, has written a book whose main purpose is to examine the claims of rape culture advocates or PC (politically correct) feminists and examine the veracity of those claims. The book is meant to be an introduction to the topic and is set-up in textbook form with a list of topics to be discussed at the beginning of each of the seven chapters. The key claim of PC feminists is that patriarchal or male-dominated societies use force, language, and laws to subjugate women and that rape or the threat of it, is an essential element to the point a rape culture exists, which encourages male sexual aggression and males (particularly white males) benefit even though they themselves have never been sexually aggressive. Where did such thinking originate? The modern feminist movement began in the 1960s and McElroy praises it for countering beliefs such as only bad girls get raped and women bring rape upon themselves. That said, rape was still largely viewed as a crime committed by one person against another and should be dealt with through the criminal justice system, like any other serious crime – a view that the author maintains is still the correct way to deal with rape. However, by the 1980s, a group of feminist intellectuals and academics including Catherine Mackinnon and Andrea Dworkin began to portray rape in a different light. Drawing on the earlier works, such as Susan Brownmiller’s Against Our Will, rape came to be defined not so much as one person harming another, but as a way for one political class (men) to subjugate another (women). The intellectual roots of such thinking can be traced to the works of Michel Foucault, the French intellectual, which are discussed in Chapter 2. Foucault stated that reality and truth are whatever the dominant group defines as such. To the PC feminist, males define reality in which rape culture is an important element supporting male domination. Foucault also believed that truth changes as dominant groups rise and fall. Indeed, the ultimate goal of PC feminism according to McElroy is to reconstruct society and move away from patriarchy.

To do so, the idea of a rape culture needed to become firmly imbedded in a society. There are a number of ways this has occurred. One of these is what the author calls “Kafkatrapping,” which happens when a person is accused of a thought crime. Although the accused will deny the charge, they cannot prove what they verbalize is actually what they think. Consequently, when men are accused of supporting a rape culture, they will deny it but cannot prove otherwise, casting doubt on their character and motives. Besides kafkatrapping, PC feminists refuse to acknowledge evidence which doesn’t support their position. The strongest of which is that the number of rapes has actually declined over the last fifty-years. In general, PC feminists question whether traditional science, with its masculine biases, can be used to research and understand women and other marginalized groups. Instead, narratives and stories are used to validate claims often focusing on dramatic accounts of terrible crimes committed against women, which are highly effective and hard to counter despite being anecdotal in nature. Moreover, some feminists urge that researchers develop personal relationships with those they are studying to better understand a victim’s plight and to ultimately bring about social change. All of which casts doubt on any sense of objectivity. To McElroy, much of feminist research begins with ideology, cites research that is supportive, and ignores or vilifies research that contradicts.

In terms of research, the most vexing question continues to center on how much sexual assault and rape actually occurs. To answer this question, McElroy devotes an entire chapter to examining the various surveys on the topic. In all, seven surveys are analyzed ranging from the FBI’s Uniform Crime Reports, which reports on all types of violent crime, to surveys that focus only on sexual assaults on college students like the Campus Sexual Assault Study. To say the least, trying to arrive at some definitive conclusion is difficult. The rates of sexual violence found do vary a great deal, which can be traced to the sample involved, its size, how the questions are worded, and how sexual assault is defined, which is probably the most important factor. In surveys where sexual assault is broadly defined – such as forced touching – rates of assault are higher compared to those surveys that use more restrictive definitions. In the end, McElroy concludes that the National Crime Victimization Survey (NCVS) is the most accurate because it is based on a large and representative sample (90,000 households), and is given annually. The NCVS does find lower rates of sexual assault than do other surveys. However, it has been criticized on the grounds that it does not take into account sexual assault due to intoxication.

As the title indicates, McElroy believes that the ideology of rape culture has harmed both men and women. To the PC feminists, sexual assault can be almost anything that degrades women, hence, women must constantly guard against it, creating an adversarial relationship between the sexes. Making matters worse is that during every step of sexual activity consent must be obtained by the male, which is not particularly realistic or conducive to a normal relationship. Instead, the author favors the old “no means no” standard, which men should always honor. Another damaging aspect of rape culture is that it discourages acts of self-defense by women to protect themselves since to suggest that women should in any way change their behavior, even to protect themselves, amounts to victim blaming. The result of all this is that women have been infantilized rather than empowered, particularly at the university level where trigger warnings should be given by professors before potentially damaging material is discussed along with the emergence of safe spaces where females can retreat to help them recover from threats or emotional harm. The university is also the place where men have suffered the most, largely due to the implementation of new standards by the U.S. Department of Education for dealing with sexual assault beginning in 2011. Universities must now investigate all allegations of sexual assault and hold judicial hearings, which McElroy views as a violation of due process. For instance, the new standards allow the accused to have a lawyer present, but the accuser cannot be cross-examined. In addition, to be found guilty, the preponderance of evidence standard is now used rather than the beyond reasonable doubt standard used by the criminal courts. The end result of the new standards will be innocent college students being expelled from school and their lives severely altered.

The final chapter of the book addresses solutions to the rape hysteria on college campuses. To do so McElroy recommends repeal of Title IX, which she says has become the vehicle that denies basic civil rights to the accused, and the abolition of the Department of Education staffed with hundreds of lawyers ready to punish universities which do not adequately pursue allegations of sexual assault. Thus, education should be a matter left to the states and higher education should be privatized and reject all government funding, allowing schools to ignore dictates from the Department of Education. Finally, dealing with sexual violence should be left to the criminal justice system and not colleges and universities.

Although some of this makes for an interesting discussion, none of it is likely to occur. The idea of abolishing the Department of Education has been around since its inception during the Carter Administration and despite twenty years of Republicans occupying the White House, it remains in place. Hence, the federal government will continue to play a major role in higher education. Much the same can be said for privatizing higher education. McElroy is correct to point out that federal funding is the major weapon used to by the Department of Education to keep universities in line. Higher education has become highly dependent on government-backed student loans, which a majority of students receive. Without student loans, many schools’ continued existence would be placed in jeopardy, obviously a situation to be avoided. Leaving cases of sexual violence to the criminal justice system rather than quasi-judicial university proceedings makes sense. For this to happen however, more rapes and sexual assaults need to be reported to the police. Unfortunately, rape has always been underreported, particularly on college campuses, and it is one of the reasons the DOE believed that something needed to be done. One would think that McElroy would urge women to take personal responsibility and report rape and sexual assaults allowing the system to work, which could eventually lessen the need for university interventions. Instead, she maintains it should be the women’s choice and understands why some women remain silent. On balance, perhaps the place to begin to remedy the situation is not repealing Title IX (which is highly unlikely), but in modifying policies to insure due process during university hearings.

One of the questions that reading the book raises is, how pervasive is PC feminism outside of certain intellectual circles and academia? McElroy touches on the subject when she mentions the broadening legal definition of rape, but a more comprehensive discussion would have been helpful. That said, the book will be of interest to anyone who questions the assumptions of radical feminism. As mentioned, the intended purpose of the book is to serve as an introduction, presumably to be used in college-level courses that focus on women and gender issues. In this regard, the book could be juxtaposed to PC feminist beliefs and lead to some interesting discussions and critical thinking. Let’s hope that at some point this happens.