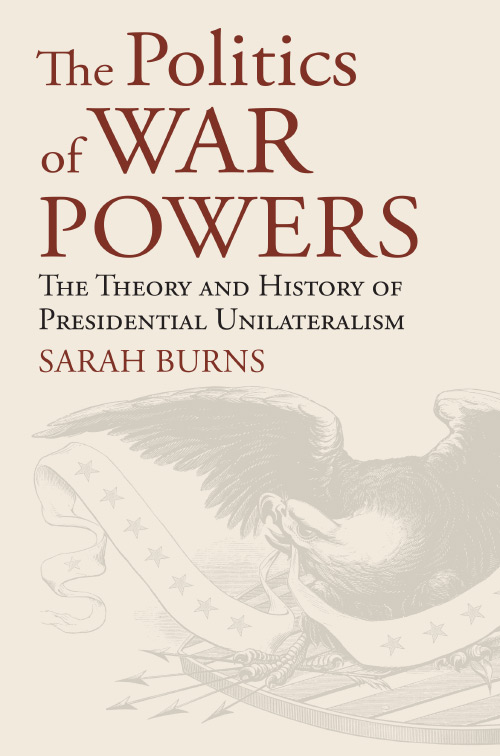 The Politics of War Powers
The Theory and History of Presidential Unilateralism
Sarah Burns
Kindle Hardcover
This book review is a web exclusive for the Fall 2020 issue of The Independent Review.

How can individuals empower a government to defend them from aggression, while also constraining predation by that government? This “paradox of government” is a central problem in constitutional political economy. When it comes to warfare, the paradox of government is particularly challenging. Military force can help fend off grave threats to life, liberty, and property. However, wars empower political leaders to centralize power and develop new forms of regimentation and social control. What rules can enable leaders to provide for the common defense while limiting the harms of war?

The American founders addressed this paradox by establishing coequal branches of government that could check one another. The executive could directly command the armed forces and make split decisions, but Congress held “the power to declare war and the power of the purse” (p. 11). In The Politics of War Powers, political scientist Sarah Burns examines how this system developed and changed over time. She explains how a system of checks and balances gave way to a system of unilateralism, in which the president sends Americans to war with no need for congressional approval.

Burns analyzes war powers through the lens of political theory, especially the work of Montesquieu. Rather than recommending a specific set of institutions, Montesquieu embraced a pluralistic approach in which “institutions have to be precisely tailored to a given people” (p. 41). To this end, he studied multiple forms of government, identifying how institutions succeeded and failed in various historical cases. Montesquieu emphasized moderate government, in which separation of powers creates checks that can prevent despotism. The legislative branch could serve as a “ballast” to counterbalance the ambition of the executive. Such checks are crucial, because “without the proper structure, leaders can manipulate the people to engage in foolish military adventures” (p. 42).

In contrast to Montesquieu’s emphasis on the separation of powers, John Locke argued that the executive may “act according to discretion for the public good, without the prescription of law and sometimes even against it” (quoted on p. 5). This “prerogative power” has increasingly come to dominate America’s approach to war powers. As Burns explains the history of war powers, she tells a tale of Montesquieuan moderation being replaced by a legalized form of the Lockean prerogative.

While Montesquieuan moderation prevailed in the country’s early years, there were still disagreements regarding executive war powers. As Burns explains, “Washington, Jefferson, and Madison demonstrated remarkably divergent views about how the executive should use the military” (p. 104). George Washington embraced an expansive view of presidential discretion, but he worked with Congress rather than embracing unilateralism. His efforts to stay neutral in the conflict between Britain and France prompted some conflict with Congress but culminated in Congress passing the Neutrality Act. Even Washington’s use of the military to combat the Whiskey Rebellion was arguably authorized by a 1792 law that empowered the president to use militias to “execute the laws of the Union, suppress insurrection, and repel invasions” (quoted on p. 89). By contrast, Thomas Jefferson was more Lockean. But while he believed the executive branch had the prerogative power to break the law for the greater good, he was personally rather restrained as president. For instance, he was reluctant to enter a war against pirates who attacked American ships, believing that decision should rest with the legislature. During James Madison’s presidency, the United States fought Britain in the War of 1812. Madison was deferential toward Congress, even as they refused to grant him the resources he requested to prosecute the war. This provides a rare example of a major war fought without presidential unilateralism.

Throughout the nineteenth century, there were several major wars in which presidents clashed with Congress. President James Polk opportunistically sought to conquer territory by leading the United States into the Mexican-American War. He received some pushback from legislators, though ultimately pro-war legislators were able to push through a declaration of war. During the Civil War, Abraham Lincoln seized more unilateral powers. Burns treats this as understandable, given the existential threat to the nation. The Constitution cannot be preserved, after all, if the nation it governs collapses. However, she notes that Lincoln’s power grabs were cited as precedent by later presidents to justify their own, more dubious, unilateralism. By contrast, legislators led the country into the Spanish-American War, over objections from President William McKinley.

In the twentieth century, presidents seized new opportunities to consolidate their power. As an academic, Woodrow Wilson advocated hierarchical, bureaucratic public administration. He believed that society had progressed past the need for many constitutional constraints. He saw these limits on executive power as “simply impediments rather than necessary checks” (p. 131). As Vincent Ostrom argues in The Intellectual Crisis in American Public Administration (Tuscaloosa, Ala.: University of Alabama Press, 2007, 262), Wilson’s theory is deeply flawed. Yet as president, Wilson was able to move the American system closer to his ideals. World War I empowered Wilson “to broaden the legal definition of the president’s constitutional powers” (p. 135). He exercised Lockean prerogative power, in which the executive acts without legal authorization. However, rather than acknowledging that he was acting outside the law, he declared that his actions were constitutionally authorized: “Wilson used legal language to give himself prerogative power while simultaneously claiming to be under the cover of the law” (p. 135).

During World War II, Franklin Delano Roosevelt moved to further shroud prerogative powers under the cover of law. FDR had already claimed additional powers to implement a litany of economic interventions in response to the Great Depression. Lawyers within the executive branch, especially those at the Office of Legal Counsel (OLC), helped FDR justify his actions. The OLC’s legal arguments “made it harder for Congress to fight back” (p. 147). Since then, presidents have consistently used the OLC to provide legal cover for their unilateral actions. The OLC’s rationalizations provide significant legal cover for presidents to initiate hostilities without congressional approval. However, new tools would soon be added to the executive branch’s legal arsenal and weaken Congress’s role.

Joining the North Atlantic Treaty Organization (NATO) and the United Nations (UN) further weakened Congress’s war powers. Each one created a new set of contingencies that could trigger obligations for the president to enter a war, without any presumption that Congress must approve the war. Signing the UN Charter meant that the United States could enter a war to enforce a resolution passed by the UN Security Council. A Security Council resolution condemning North Korea’s attack on South Korea was a key part of why the United States entered the Korean War. Similarly, UN Security Council resolutions legitimized George H. W. Bush’s attacks on Iraq. Joining NATO created similar commitments to join wars without a congressional declaration. If a fellow NATO state were attacked, the United States would be obligated to defend them. These treaties thereby moved decisions about entering wars away from the deliberative process prescribed by the Constitution.

After the Vietnam War, legislators passed the War Powers Resolution (WPR). They intended for the WPR “to restrict presidential war making” and prevent future foreign policy quagmires (p. 179). However, presidents and the OLC use the WPR “as a legal rationale for conducting unilateral presidential wars” (p. 179). The president’s lawyers at the OLC can argue that an intervention is consistent with the WPR, legitimizing the intervention.

Burns devotes two chapters to the wars that have occurred since the terrorist attacks of September 11, 2001. These attacks enabled George W. Bush to expand executive power even further, and to launch major wars in both Afghanistan and Iraq. While Barack Obama ran for president as a critic of Bush’s constitutionally dubious activities, he continued and even expanded unilateral presidential war making.

How have such consolidations of presidential power happened for so long without Congress reversing the process? One persistent theme throughout the book is that legislators refuse to check executive power. The framers of the Constitution envisioned a world where “ambition would counteract ambition.” However, it appears that for many legislators, their ambitions are best served by allowing the president to initiate hostilities without congressional approval. If a legislator does not vote on the war, then they will not be held accountable for their vote. If the war goes badly, they can criticize the president without charges of hypocrisy. In addition, many legislators have a “symbiotic relationship” with defense contractors, who often employ their constituents (p. 206). A legislator who benefits from military spending will therefore be reluctant to check presidential war powers. Under these circumstances, the legislators’ ambition will not counteract the president’s ambition. Those with the power to keep the president in check have no incentive to do so.

The book covers U.S. history from the founding through the Obama administration, but despite its impressive breadth, it cannot cover all American military actions. For instance, the Indian Wars are largely ignored. Barack Obama’s targeted assassination program, which used drones to kill targets in Yemen, Somalia, and Pakistan also receives little or no attention. This reflects how pervasive American militarism has been, not a flaw in the book. Future research could fruitfully apply the book’s framework to the acts of war Burns did not address.

Burns combines careful, well-sourced history with a solid analytical framework drawn from political theory, particularly the works of Montesquieu and Locke. While political theory is her primary analytical framework, her analysis of political incentives is compelling, which makes the book very useful for political economists. This book could make a worthwhile addition to syllabi in constitutional political economy or public choice. The writing is accessible and clear. Members of the public, as well as scholars across the humanities and social sciences, can learn a great deal from this book. I highly recommend it to anyone interested in constitutional political economy, U.S. foreign policy, and the evolution of presidential power. If you want to understand the growth of government, particularly the increased scope of executive power, read this book.