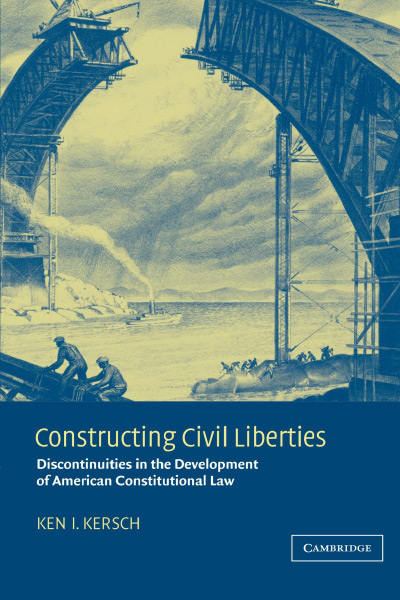 Constructing Civil Liberties
Discontinuities in the Development of American Constitutional Law
Ken I. Kersch
Kindle Hardcover Paperback
This book review appeared in the Summer 2006 issue of The Independent Review.

It has long been apparent that modern constitutional law bears only a faint resemblance to the original constitutional vision. The United States no longer has a federal government with few and limited powers. Nor does the prevailing constitutional ideology reflect the framers’ conviction that the security of private property is essential for the enjoyment of political liberty (see James W. Ely Jr., The Guardian of Every Other Right: A Constitutional History of Property Rights, 2d ed. [New York: Oxford University Press, 1998]). The triumph of the New Deal and the subsequent constitutional revolution of 1937 fundamentally altered the legal landscape. Most post–New Deal scholarship sought to justify the new constitutional order and celebrated the demotion of traditional property rights. Concomitantly, historians fashioned a view of the past that stresses the steady, linear expansion of civil liberties and civil rights during the twentieth century.

In the revisionist work Constructing Civil Liberties, Ken I. Kersch challenges the conventional wisdom and offers a compelling rejoinder to what he terms “the Whiggish New Deal narrative” (p. 5). Such Whiggish accounts, he maintains, treat history as a morality play and “import a particular set of unifying myths into the study of constitutional development concerning civil rights and civil liberties” (p. 11). Instead of the flawed tale of a triumphant concern for civil rights and civil liberties overcoming the judicial solicitude for economic rights that characterized pre-1937 constitutionalism, Kersch presents a more complex and equivocal story. Important claims of right often conflicted, and some traditional liberties were rejected in order to advance newer understanding of which rights deserved protection. As Kersch explains, to picture this messy process involving difficult choices as a seamless march of progress, scholars have ignored inconvenient facts and made “extensive historical erasures” (p. 17). Indeed, he points out that progressives and liberals have not been consistent champions of personal rights and have frequently shifted from one cause to another while couching their essentially political choices in moralistic terms. Progressives and liberals often privileged group rights—on behalf first of organized labor and thereafter of blacks, for example—over individuals’ rights claims.

Kersch assesses the accuracy of the Whiggish narrative by examining the evolution of privacy rights, criminal justice procedures, labor law, civil rights, and educational policy from the late nineteenth century to the present. He finds a substantial disconnect between an imagined past, conjured up by progressives and liberals, and the historical record. He concludes that “progressives and civil libertarians were just as likely to be opponents of individualistic freedom as its champions” (p. 28). Indeed, he emphasizes that progressives and liberals in the early twentieth century were in fact preoccupied with strengthening governmental power, not defending individual rights. They tended to regard claims of rights as barriers to their state-building project.

Consider the checkered history of a right to privacy. Committed to building a powerful state, progressives in the early twentieth century saw privacy rights as an obstacle. According to Kersch, Louis Brandeis does not deserve a reputation as the originator of the right to privacy. The famous 1890 article on privacy coauthored by Brandeis simply proposed a tort remedy by members of the social elite to curb unwanted publicity. It bore only the most attenuated relationship to the modern right of privacy, which is concerned primarily with issues of sexual autonomy, devised in the 1960s by the Warren Court. In fact, Kersch argues, Brandeis was not a strong champion of privacy and saw publicity as a regulatory tool. He favored expansive investigatory powers to gather information and expose economic wrongdoing. He demonstrated some interest in privacy in Prohibition cases, but conservative Justices Pierce Butler and James McReynolds proved more consistent defenders of privacy in those cases. In the same vein, Kersch asserts that progressives urged a narrow reading of the guarantees of the Fourth and Fifth Amendments to facilitate their regulatory agenda. Only in the 1950s did the Supreme Court rediscover limits on illegal searches, and then it applied the exclusionary rule largely in street-crime cases with racial overtones.

Similarly, the notion that reformers were dedicated to the defense of oppressed minorities, long a staple of the Whiggish narrative, is highly problematic. In the early decades of the twentieth century, most progressives were indifferent to racial segregation. Their signature cause was the encouragement of labor unions, a number of which openly excluded black members. “Antiracism at this time,” Kersch explains, “was not part of the definition of what it meant to be a reformer.” (p. 91). Not until the 1960s did civil rights replace labor unions as the liberals’ central imperative. Yet, to sustain their version of history, liberals have airbrushed away the long antagonism between blacks and unions.

Kersch also develops the theme that progressives and liberals often in fact distrusted political democracy. They redefined democracy as an expression of statist liberalism in which policy should be governed by an administrative elite rather than by the views of the populace. This redefinition helps to explain the remarkable transformation in liberal attitudes toward judicial review. Before 1937, progressives and liberals were hostile toward judicial review and urged judicial deference to legislative decision making. As New Dealers gained control of the federal judiciary, however, progressives and liberals saw judicial power in a new light. They increasingly urged the Supreme Court to become a vigorous policymaker that would advance modern legal liberalism without regard to public opinion. This shift posed a nettlesome task for scholars seeking to defend post-New Deal judicial activism. It was necessary, in Kersch’s words, to formulate “new constitutional theories that set out in nuanced ways why judicial review and judicial activism were justified in some circumstances (for ends that they [the liberals] approved) and not for others (for ends that they opposed)” (p. 2).

In recent years, a number of intellectuals, having apparently despaired of achieving their vision of a good society through American political or constitutional development, have expressed interest in global constitutionalism. They have found in supposed international norms a vehicle to impose European social-welfare policies on the United States. Even some justices of the Supreme Court, in a much contested departure, have looked to foreign sources of authority to resolve domestic issues. Such developments may underscore “the marginality of the liberal-left in contemporary domestic politics” (p. 349), but they also demonstrate the antidemocratic strain in modern constitutional liberalism.

Kersch does not hesitate to question the historical image of leading legal figures. Following the path marked by other scholars (see Albert W. Alschuler, Law Without Values: The Life, Work, and Legacy of Justice Holmes [Chicago: University of Chicago Press, 2000]), he disputes the reinvention of Oliver Wendell Holmes Jr. “into a progressive pragmatist and proto-civil libertarian” (p. 291). The image of Holmes as a progressive jurist is sharply at odds with the historical record. In reality, Holmes’s jurisprudence was less concerned with individual rights than with power. Influenced by Social Darwinism, he saw the judicial role as ratifying the outcome of political and class struggle. He displayed no sympathy for labor or racial minorities and certainly would not qualify as a modern liberal. Moreover, Kersch notes that in several cases Holmes sought to rein in the scope of governmental investigations into business practices and “did not draw the after-constructed distinction between economic and personal privacy” (p. 63) (see Harriman v. ICC, 211 U.S. 407 [1908]). This line of decisions, of course, was antithetical to the progressive push to curtail privacy rights.

This excellent volume covers so much ground that it seems churlish to ask for more. Kersch correctly points out that by the mid-twentieth century, freedom of speech came to occupy the most favored position in liberal constitutional thought, displacing other values, such as economic liberty. There were, to be sure, exceptions to the apotheosis of speech rights. Group claims sometimes were allowed to trump individuals’ free expression. Kersch stresses, for example, that speech in the workplace has been curtailed at the behest of unions and feminist groups. Recently, however, the high regard for speech and the marketplace of ideas in constitutional theory has been more broadly attacked. Many on the political left have grown disenchanted with free speech and now advocate suppression of some forms of speech. They call on the Supreme Court to abandon content neutrality as a constitutional norm. (See Cass R. Sunstein, Democracy and the Problem of Free Speech[New York: Free Press, 1993].) Many of these proposals to censor free expression, such as laws regarding so-called hate speech, are transparently linked to political agendas. This development suggests that at least among some academics free speech no longer enjoys preeminent status. Might it also indicate that the elevated constitutional protection afforded speech was more tactical than principled? Was free speech valued only so long as it served the progressives’ shifting goals? Kersch might profitably have explored this possibility.

Quibbles aside, Kersch has written a fascinating book that offers a fresh look at constitutional history and demolishes the Whiggish narrative as an exercise in historical whimsy calculated to serve political ends. This work, which covers many subjects well, should set the stage for a far-ranging debate over the meaning and direction of our constitutional past. It deserves a wide audience.