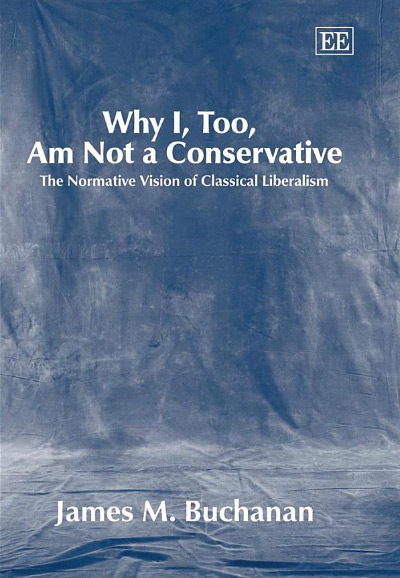 Why I, Too, Am Not a Conservative
The Normative Vision of Classical Liberalism
By James M. Buchanan
Hardcover
This book review appeared in the Winter 2007/08 issue of The Independent Review.

In this small volume, James Buchanan lays out his understanding of classical liberalism’s fundamental principles and how they differ from the principles that inform conservative and modern liberal thought. The book contains twelve recent essays, the first and last of which were written specifically for this work. Every chapter includes interesting insights, along with some surprises. Buchanan has never been afraid to depart from conventional views, and those who think they can pigeonhole himinany particular orthodoxy are invariably mistaken.

The introductory chapter, “Why I, Too, Am Not a Conservative,” is obviously motivated by “Why I Am Not a Conservative,” F. A. Hayek’s famous postscript to The Constitution of Liberty (Chicago: University of Chicago Press, 1960, pp. 397–411). Buchanan recognizes that he and Hayek are often mistaken for conservatives because their opposition to replacing decentralized market arrangements with central planning is indistinguishable from the conservative position. He also recognizes that his emphasis on contractarian restrictions in achieving institutional reform gives the appearance that he favors the status quo over constructivist changes, as conservatives do. He makes clear, however, that he differs from conservatives and from Hayek in his greater willingness to accept constructed change in fundamental rules as long as the change meets the test of agreement by those who will be bound by it.

Buchanan is more concerned than Hayek was with the detailed differences between classical-liberal and conservative principles. Indeed, Hayek saw conservatives as largely devoid of principles. According to Hayek, although a conservative wants to slow change, he “cannot offer an alternative to the direction in which we are moving” (Constitution, p. 398); he tends not to “object to coercion or arbitrary power so long as it is used for what he regards as the right purposes” (p. 401); he “is essentially an opportunist and lacks [political] principles” (p. 401); and he lacks “faith in the spontaneous forces of adjustment” (p. 400). Buchanan does see conservative principles and contrasts them sharply with the principles that underlie classical liberalism. For example, conservatives see a hierarchy of individuals in which standing serves as a good proxy for superiority, whereas classical liberals (following Adam Smith) see people as natural equals, with no clear criteria for judging some as generally superior and others as generally inferior. Buchanan also argues that conservatives perceive the existence of ultimate values as independent of individuals’ subjective preferences. These values are given; our task is to discover them. In contrast, classical liberals see values as flowing from individuals’ preferences and concerns, with no one privileged to dictate his values to others. General values will tend to emerge from an evolutionary process, but they need not be permanent or apply with equal force to all groups or social orders.

In chapter 2, Buchanan departs somewhat from a common classical-liberal view regarding the perfectibility of man. This standard position holds that to improve the social order, we must improve the social institutions (and the incentives they embody) rather than try to improve people. Although Buchanan rejects romantic notions of how the world would be a better place if only people quit acting like people, he argues that the behavior of a significant number has to satisfy certain minimum standards for a classical-liberal order to survive. These standards include the willingness and fitness to take on the responsibility of freedom; obedience to the prevailing rules of just conduct in dealing with others (Buchanan illustrates this point by discussing a forty-year-old disagreement he has had with Gordon Tullock); attainment of a reasonable understanding and acceptance of how the world works; and willingness to defend the liberal order by distinguishing between those who do and do not deserve to be treated as members of that order, imposing what Buchanan calls “constructive discrimination” (pp. 18–19), a standard he added to this chapter after September 11, 2001.

In chapters 3 and 4, Buchanan continues with a discussion of the importance of people’s accepting a large measure of responsibility and treating each other with respect and reciprocity. He argues that a liberal order can be sustained only by regarding dependency and opportunism as clear violations of acceptable social norms. In chapter 4, he discusses the social norms of respect and reciprocity as part of the broad institutional framework of liberalism; they are public goods, but they are not as easily provided as standard public goods, such as national defense or mosquito control. We do not, however, have to hope passively that these social norms will simply emerge from an evolutionary process, as indicated in some interpretations of Hayek’s position. According to Buchanan, these norms “can be ‘produced,’ even if through a slow process, by effective ‘preaching,’ which concentrates in the inculcation of the basic Puritan values and virtues” (p. 38).

Buchanan’s next two chapters deal first with the ethics of liberalism and then with making a compelling case for liberalism. One may be forgiven for wondering, after reading these chapters, whether the former does not undermine the latter. In chapter 5, Buchanan draws a distinction between the ethics of compassion (the ethics of the modern welfare state) and the ethics of reciprocity (the ethics of classical liberalism). The first presupposes a natural hierarchy, with those on the top rungs ethically responsible for showing compassion for those on the bottom rungs. The second presupposes a natural equality among people and requires that each be treated with fairness in accordance with common rules of conduct. Buchanan sees this distinction as providing insights into (1) Rawls’s construction of fairness as an application of the ethics of classical liberalism; (2) the ethical differences between private and collective action; (3) the different ethical presumptions of those who favor and those who oppose capital punishment; and (4) the ethics of enlightened self-interest.

Chapter 6 finds Buchanan making the case that classical liberalism cannot achieve “sufficient public acceptability” (p. 53) when presented only as a scientific inquiry into the implications of self-interest. He issues a call to present classical liberalism in terms of its soul—its “animating or vital principle” (p. 53) and “moving spirit” (p. 53). In other words, an effective case for classical liberalism requires emotional uplift (although Buchanan never mentions emotion) in addition to scientific coherence. This argument takes us back, however, to chapter 5. Can one present classical liberalism with as much “moving spirit” as one can present an ideology based on the ethics of compassion while remaining faithful to the ethics of reciprocity and self-interest? It is difficult to see how this question can be answered in the affirmative when we recall Buchanan’s description of the “compassionate classical liberal” as approaching “oxymoronic classification” (p. 8).

The hope has to be that classical-liberal principles can be presented as far more compassionate in their operation than those underlying the welfare state—that classical liberals can be seen as every bit as compassionate as modern liberals, but with a different (and superior) understanding of how best to exercise their compassion. This presentation will not be easy. In comparison to welfare-state liberalism, which appears to dispense compassion directly, classical-liberalism achieves compassion indirectly, so that recognizing this achievement raises Frederic Bastiat’s problem of “what is seen and what is not seen.”

Buchanan uses the classical-liberal principles presented earlier to explore other interesting questions and issues in the final six chapters. For example, why are classical liberals more willing to “stand up and be counted in opposition to sometime popular causes” (p. 68) than are others with the same intellectual understanding of the organizing ability of the market? Why is genuine community required for a liberal order, and how does this community differ from the one that communitarians have in mind? And how important was Hayek to the “attitudes and ideas” (p. 86) that shaped the twentieth century? In the final chapter, Buchanan presents some personal reflections on the nature of his intellectual enterprise.

The book is short, but it is not a quick read. Thought and reflection are required as some passages are read and reread. The effort, however, will be well rewarded.

Dwight R. Lee
University of Georgia
Government and PoliticsLaw and LibertyPolitical HistoryPolitical Theory
Subscribe Buy This Issue Get the App