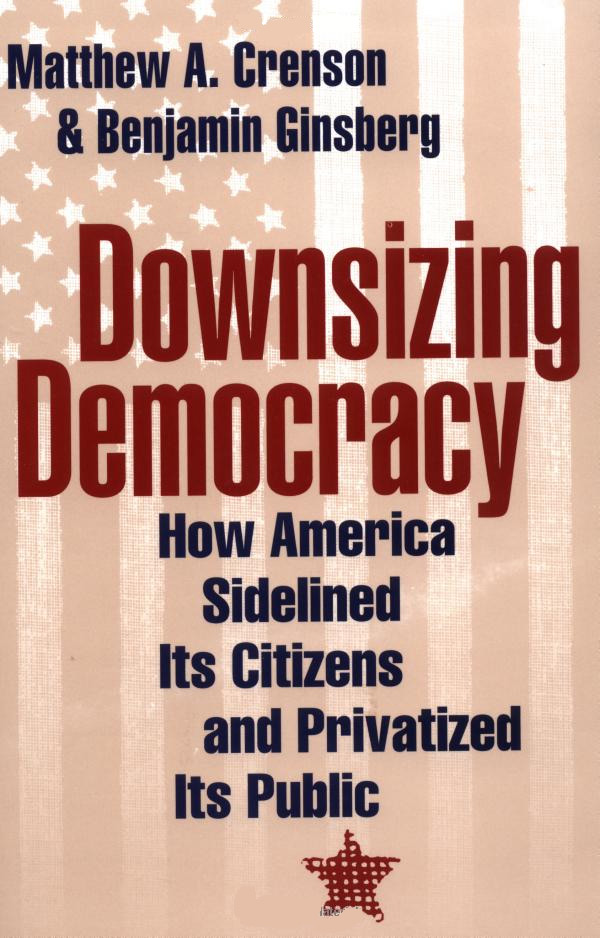 Downsizing Democracy
How America Sidelined Its Citizens and Privatized Its Public
Matthew A. Crenson and Benjamin Ginsberg
Kindle Hardcover Paperback
This book review appeared in the Summer 2004 issue of The Independent Review.

Writing in well-documented, analytical style, Matthew Crenson and Benjamin Ginsberg, professors of political science at Johns Hopkins University, expose the thoroughly corrosive impact of beltway politics on democratic processes and citizen power. The authors begin with the thesis that for more than two centuries ordinary citizens have served as the “backbone of the western state” (p. x), but, they contend, emerging political relationships at the national level of U.S. government are rapidly bringing the era of the citizen to a close. Somewhere in the middle of the twentieth century, the authors assert, policy elites became disengaged from the political public because a mass base was no longer needed for influencing and manipulating public policy. By documenting the evolving disregard for citizen judgment and influence in national policy circles, this book confirms that the creeping sense of political impotence spreading across the United States is not without foundation.

Crenson and Ginsberg argue that as government has burgeoned, Americans have been transformed from citizens who are effective political participants into customers who are recipients of government services. Citizens have been marginalized as political actors. Their leaders no longer need concern themselves about collective mobilization of opinion because, intentionally or unintentionally, they have disaggregated the citizenry into a personalized democracy. The national government today can raise an army, collect taxes, and implement policy without widespread public support. The withholding tax has made the voluntary component of tax collection much less important, and the professional military has limited the need for citizen soldiers. More generally, the proliferation of special interests in the nation’s capital has provided bureaucrats with a ready substitute for public approval and support. In the authors’ words, “The era of the modern citizen, which began with a bang, is quietly slipping away” (p. 21).

Paradoxically, many of the attempts to make U.S. government more democratically responsive have in fact made it less so. In particular, the authors point to the reforms of the Progressive Era—such as the party primary, the recall, and the referendum—as seriously weakening the parties’ ability to mobilize voters and to structure their choices. The parties have responded to the threats posed by uncontrolled mass activity with a noticeable reluctance to extend their electoral base. Neither the Democratic Party nor the Republican Party has much enthusiasm for mobilizing more voters. Instead, both parties look to gain support from a narrowed electorate by scavenging patronage from the leavings of governmental policy decisions. In lieu of ideological combat on the hustings, parties have turned to attempting to “defund” the other side by restricting or eliminating its support from government programs.

Group conflict within the beltway now dominates American politics, and by the mid–twentieth century political scientists viewed group activity as “the essence of American politics” (p. 106). With the rise of what Theodore J. Lowi has critically described as interest-group liberalism, government became little more than a broker for competing interests. Moreover, in terms of information and access, the increase in regulatory institutions at the national level has given group leaders located within the beltway a tremendous advantage over their colleagues in other parts of the nation. Perhaps of most concern, these “insider” groups themselves now discourage their members’ active political involvement. As an example, the authors describe how the establishment of the National Labor Relations Board gave union leaders privileged entrée at the national level and consequently decreased noticeably their interest in mass-based labor activity. Many groups in the nation’s capital have followed similar paths, and Crenson and Ginsberg note that some “groups,” drawing on foundation support and their ability to extort funds from regulated businesses, have no members at all.

The proliferation of groups that function without public support has been encouraged by major changes in the litigation process. By providing successful plaintiffs with a right to legal fees in many cases, Congress has encouraged attorneys to push advocacy and tort litigation, which in turn has been facilitated by judicial loosening of the requirements for standing and class action. Thus, special interests now can obtain from the courts policy decisions that previously would have required political pressure on elected officials. For many groups, litigation, combined with the advantages of insider access, has lessened dramatically their need for wider public support. In this respect, the authors trace the civil rights, consumer, and environmental movements from their beginnings as popularly based struggles to the narrow group causes they have become today. Focusing on the techniques of policy influence rather than on broad political appeal, the dynamic of insider-group politics has engendered a public policy bereft of publics.

Despite the acuity of the authors’ insights into the dire direction of the U.S. policy process, they seem oblivious to the possibility that big government itself is the cause of the problem. Thus, though worthy, their arguments for revitalized political parties that engage in identifiable ideological competition drawing on public support and for an authoritative institutional structure at the national level that locates responsibility for policy decisions and provides a locus for public influence ultimately fall short. Indeed, the major thrust of their analysis is that nonelected public officials have become exceptionally adept at disaggregating the political public into personalized interests. Thus, there appears to be no incentive whatever for these officials to encourage their clientele groups and the political parties to move toward mobilization of wider publics or for them to support more institutionally responsible government. At a time of increasingly acrimonious domestic politics and prolonged battles against international terrorist threats, the relegation of Americans’ role as citizens to the periphery of the policy process may only strengthen those governmental forces that seek greater distance from a democratic base. The consequences might well be a Frankenstein’s monster of exceptionally powerful officialdom with neither defined goals nor clear responsibility to the American public.