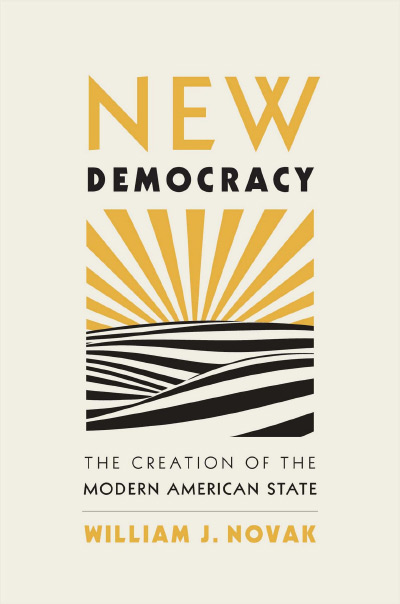 New Democracy
The Creation of the Modern American State
By William J. Novak
Kindle Hardcover Audiobook
This book review is a web exclusive for the Fall 2022 issue of The Independent Review.

Lamentations over supposed threats to democratic governance in the United States fill the media. It has become an article of faith for many on the political left that democracy is under assault by nefarious forces. Attorney General Merrick Garland echoed these warnings in a May 2022 speech at Harvard. Yet amid these dire predictions relatively little attention is given to defining what is meant by democracy.

Novak starts his problematic account of the growth of this new and transformative democracy by rejecting the constitutional settlement before the Civil War. “Modern American history,” he maintains, “begins with the abolition of the slaveholders’ constitution” (p. 25). This reflects the mantra, currently fashionable on the political left, that that constitutional limits on the power of the federal government were designed to safeguard slavery and can therefore be ignored. Since the structural features of the Founders’ Constitution did indeed impose obstacles to the expansion of government, progressives have long attempted to discredit the document (see, for instance, Charles A. Beard, 1913, An Economic Interpretation of the Constitution of the United States (New York: Macmillan). Consistent with this view, Novak also dismisses the classical liberal account of the state, promoted by John Locke, grounded in individual rights. He sees no merit in “the thin negative vision of Lockean liberalism” (p. 8). Any claims of individual rights are accordingly downgraded in favor of public welfare and public good. Free speech, for instance, once seen as vital to a free society, does not feature in Novak’s description of New Democracy. If one questions Novak’s vision of a new democratic society, is there room for dissent? Similarly, property and contract rights do not warrant a mention and are presumably enjoyed only at the sufferance of the state.

Novak builds his case for the New Democracy by arguing that the Fourteenth Amendment established a new conception of national citizenship, which in turn undergirded a vast expansion of the modern state. For example, a more robust conception of the police power gained currency in the late nineteenth century. Stressing the shortcomings of private common-law adjudications to govern society, progressives pictured the police power as an affirmative authority to legislate broadly for the public welfare. Progressives viewed private economic power as a threat to democracy and championed the social control of business enterprise. They promoted the public utility idea as a basis to regulate business and impose price controls, and were enthusiastic about anti-trust measures to curb perceived monopolies. Novak is especially keen about the huge expansion of administrative agencies. He sweepingly proclaims that the administrative state “was the functional vehicle of the larger socioeconomic policy goal of public provision so as to achieve a more just distribution of power and resources in a democratizing and modernizing society” (p. 220). Novak frequently characterizes these developments as “radical” and “transformative.” He does not explain what be means by a more equitable distribution of resources, but Americans have never shown sustained interest in either transforming society or worrying about the unequal distribution of wealth.

No one doubts that there were profound changes in American society after the Civil War. Consequently, the response of policy makers to the rise of large corporations and new technology has been well explored by other historians. In contrast to Novak, some have emphasized the ambivalent character of the legal and political reaction to these changes, pointing out that political restraints and skepticism toward government also helped to shape thinking about economic and social policy. (See, for example, Morton Keller,1990, Regulating a New Economy: Public Policy and Economic Change in America, 1900–1933, Cambridge, Mass.: Harvard University Press.) What sets Novak apart is his persistent contention that the rise of public law in this period was designed to overhaul American society and usher in a new democratic state focused on social change and egalitarian goals.

It follows that Novak’s broad claims about the New Democracy warrant careful exploration. Despite prodigious research, Novak’s argument ultimately rests upon the self-serving views of prominent scholars associated with the Progressive Movement of the early twentieth century. They never tired of proclaiming their democratic aims. Yet in fact these reformers were not democratic at all. As Herbert Hovenkamp (1991, Enterprise and American Law, 1836–1837, Cambridge, Mass.: Harvard University Press, p. 77) has pointed out: “Progressive Era social scientists were much more paternalistic than democratic.... Almost from the beginning, social scientists were committed to the view that important decisions should be made by experts.”

This explains the progressive enthusiasm, fully shared by Novak, for governance by administrative agencies staffed by supposed experts. But there is room to doubt the rosy picture of administrative law painted by its champions. Citizens are regularly impacted by administrative fiat. Such decisions by unelected bureaucrats, subject to minimal political or judicial oversight, strike many as profoundly anti-democratic and hostile to individual rights. (See, e.g., Philip Hamburger, 2014, Is Administrative Law Unlawful, Chicago: University of Chicago Press.) Novak acknowledges these criticisms but brushes them aside, confident that “the administrative revolution was born of a radical reform energy” to serve “new democratic principles” (p. 235). Moreover, Novak never investigates whether administrative agencies actually fulfilled the heady promise of pragmatic, efficient regulations while remaining sensitive to public opinion. For a cautionary example, consider the Interstate Commerce Commission, the pioneering federal agency. By the mid-twentieth century the ICC was widely seen as an ineffective body which contributed to the decline of the rail industry. Few tears were shed when Congress abolished the agency in 1995. Such regulatory failure doubtless fueled the deregulation movement.

The reformist zeal to overhaul society was certainly not confined to economic matters. Progressives also utilized new social science doctrines to formulate more expansive approaches to long-standing problems of criminality and sexuality. Indeed, Novak suggests that the Progressive Era was obsessed with the control of vice. Even more troublesome, progressive enthusiasm for social science fostered the practice of eugenics, hardly a paragon of democratic initiative, which Novak briefly notes in passing but might well have treated at greater length.

Notwithstanding my reservations about Novak’s efforts to describe and champion a new democratic state, his account contains some valuable insights. He forcefully attacks the dubious if hardy notion that the United States enjoyed a laissez-faire economy in the late nineteenth century. Novak rightly points out that there was great deal of regulatory activity in this period. As Novak also correctly declares, the Supreme Court never sought to impose a laissez-faire regime on the American economy. Not only would such a task have been beyond judicial capability, but the Supreme Court in fact upheld the vast majority of challenged legislation. Curiously, as Novak makes clear, leading progressives, who Novak otherwise praises, were responsible for perpetrating this laissez-faire myth. Along the same lines, Novak recognizes that the famous, if much abused, case of Lochner v. New York, 198 U.S. 45 (1905) was not the barrier to legislative reform that it has often been pictured. In fact, Lochner was infrequently followed and has served primarily as a punching bag for the political left. As discussed by David E. Bernstein (2011, Rehabilitating Lochner: Defending Human Rights against Progressive Reform, Chicago: University of Chicago Press), progressives heaped calumny on the case and the justices who joined the majority opinion because they generally opposed any robust constitutional protection of economic rights.

Novak spins a triumphalist narrative in which the New Democracy, and the accompanying web of regulations and agencies, sweeps away constitutional restraints on government and redefines democracy in terms of substantive goals to benefit the collective welfare. To his mind, Americans discarded James Madison and Alexander Hamilton in favor of John Dewey and Jane Addams. Strikingly, however, he concludes on a downbeat note. It appears that we live in a Second Gilded Age in which corporate power is again ascendant and conservative views prevail in both in both law and politics. “One cannot help but worry,” Novak frets, “that contemporary America is being systematically de-democratized” (p. 270). Such despair highlights the danger of identifying one’s conception of democracy with a particular political agenda. On a deeper level, moreover, it raises the fundamental question of whether Novak’s New Democracy is a myth, a figment of wishful thinking in hopes of finding a template for a radical interpretation of American history.