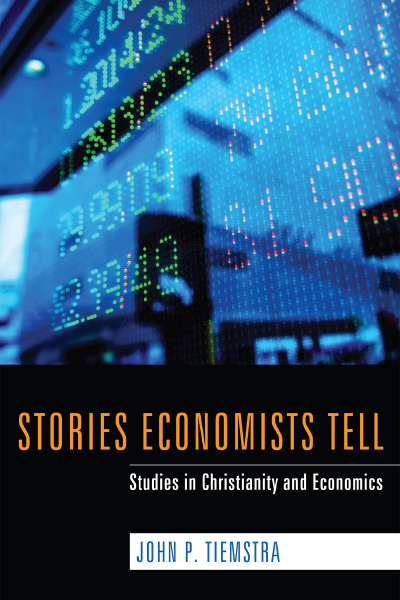 A wide range of people from diverse backgrounds, perspectives, and worldviews practice the discipline of economics. When there is enough commonality among some practitioners, they may coalesce into an organized group for both fellowship and discussion of the academic discipline they practice. Such is the case with economists who adhere to the Christian faith. For some time, there has been robust interchange among Christian economists as to the relevance of the Christian faith to economics. In 1982, a formal organization, the Association of Christian Economists (ACE), was formed and now counts some four hundred members. It publishes a journal, Faith and Economics, and sponsors sessions at the Allied Social Science Association meetings, and its members often organize conferences that take up the intersection of Christianity and economics.

John Tiemstra has been a longtime member of ACE (as have I) and the most outspoken critic of how Christian economists do economics. It is very useful, therefore, to have a compilation of many of his writings. Stories Economists Tell consists of fifteen short essays Tiemstra published between 1988 and 2009. With them, one is able to follow his thinking over twenty years. The chapters are organized into four categories: Christian theology and economic methodology; government, business, and society; economy and the environment; and globalization and competitiveness.

The first section on methodology is the most interesting because it is here that Tiemstra has been the most vocal critic of much of other economists’ work, especially Christian economists. His methodological problems with economics have remained quite consistent over time. He believes that Christian economists should do economics, but they should do it differently from other economists. His primary criticism is the restrictive assumptions of the rational-choice model. Thus, he proposes a Christian economics that uses many of the standard tools of economics (p. 36) but moves beyond the standard neoclassical paradigm because, by “accepting as data only observed economic behavior, and not introspective reports concerning motives, values, and the like, economists have cut themselves off from an important source of information” (p. 23).

There are two responses to Tiemstra. First, the ability to explain phenomena with a limited set of assumptions about behavior gives economics much of its power. Second, even though economics does rely upon a limited set of assumptions about human behavior, it is not as limited as Tiemstra claims. In a 2009 article, he disputes “the account neoclassical economists give of human motivation, particularly the assertion that all relevant human motivation stems from a natural and laudable drive to maximize one’s standard of living” (p. 59, emphasis added). In a 1994 article, he asserts, “The problem is the assumption that pecuniary considerations are all that ever matter” (p. 41, emphasis added). Tiemstra sees the basic assumptions of economics very differently than I do. I can’t think of a single economist I have worked with who thinks that all people all of the time try to maximize their pecuniary income. Nor do economists deny that conceptions of justice, fairness, and sustainability are relevant to economic actors.

Most introductory textbooks simply assert that people have well-defined goals and try to fulfill them the best they can. In their introductory text Modern Principles of Economics (New York: Worth, 2012), Tyler Cowen and Alex Tabarrok ask, “Do economists think everyone is self-interested all the time? Of course not. We love our spouses and children just like everyone else! But economists do think that people respond in predictable ways to incentives of all kinds. Fame, power, reputation, sex, and love are all important incentives” (p. 2).

One can fault Tiemstra for holding throughout most of his career the view that economics is more restrictive than it actually is, but in one of his more recent publications (“Notes from the Revolution,” 2009) he does see economics as having undergone fundamental change. He says, “The greater openness to new forms of evidence, together with a growing embarrassment about the lack of sound psychological foundations for economics, has led to the gradual discrediting of the neoclassical canonical model and its abandonment for research purposes” (p. 61). Again we differ in our evaluation. I don’t see an abandonment of the neoclassical model, but rather its enrichment by behavioral economics, experimental economics, public-choice theory, the New Institutional Economics, and Austrian economics. This quibble may be only semantic, but starting with the rational-choice model of self-interest (not selfishness) still seems the most profitable way to introduce students to the economics discipline. The development of new fields and the expansion of old ones have not led to the discrediting of economics, but to a robust discipline that has more to say than ever before about the world we live in.

One of the differences in our take on modern economics is Tiemstra’s treatment of government activity. He sees market failure as omnipresent, but only in a few places in his essays does he recognize the potential for government failure. For instance, he faults economics for not “incorporating issues of power into economic analysis” (p. 76). It would seem that the public-choice research agenda would be at least a partial answer to his desire to see more consideration of power. It is interesting that the bibliographies for his articles contain not one mention of James Buchanan or Gordon Tullock. Mancur Olson gets one brief citation. Other recent work in economics receives scant attention, including the New Institutional Economics of Ronald Coase, Douglass North, Elinor Ostrom, or Oliver Williamson.

Tiemstra does posit an alternative economic paradigm, what he calls “Post-Keynesian institutionalism” (PKI), as the most hopeful for Christian economists. It is not clear exactly what PKI entails, but it certainly is not the New Institutional Economics of North, Ostrom, Williamson, and Coase. He likes PKI economics because it “also permits us to ask all of those especially important questions about how people’s values and religious commitments affect their economic behavior, and the influence that has on the structure and performance of the economy” (p. 40). Again, it would seem, though, that experimental economics, behavioral economics, game theory, public-choice theory, and the work of economists such as Robert Barro have already been doing exactly that.

One wishes there would have been more opportunity for interaction between Tiemstra and one of his contemporaries, economist Paul Heyne. Heyne was also a devout Christian who took questions seriously about the intersection of his faith and his discipline. He unfortunately did not publish much of his writing in accessible places, so his influence came mainly through personal interaction with people he met at conferences. Liberty Fund published a compilation of many of his essays in 2008 as “Are Economists Basically Immoral?” and Other Essays on Economics, Ethics, and Religion, which was reviewed in The Independent Review in the Winter 2010 issue. Heyne takes up Tiemstra’s concerns in his essay “Can Homo Economicus Be Christian?” He argues that economists have done a poor job of defending and explaining the basic assumptions of their model but concludes that the self-interest assumption of economics is powerful and useful even if it doesn’t explain all behavior.

Heyne agrees with Tiemstra that the bright line that many economists see between positive and normative economics does not exist. However, never departing from his role as a Christian economist, Heyne authored numerous editions of a popular introductory text, The Economic Way of Thinking, through which thousands of students were introduced to the fundamental principles of economics. Thus, from Heyne’s perspective, a thoughtful Christian can also be a practicing economist who uses the standard tools of the discipline.

Interestingly enough, when one turns to the essays Tiemstra has written on actual economic problems, he sounds a great deal like a regular economist. It is clear that his dislike of the standard economics paradigm has not led him to a completely different set of tools than those used by most economists, Christian and otherwise. For instance, he analyzes the problems of waste disposal and recycling in his essay “Wasting Time and Wasting the Earth.” In one paragraph he uses the word incentive(s) five times, and not in a pejorative sense. In much of his other writings, he also sounds like a standard economist. At one point, he discusses the necessity of government provision of public goods (p. 123). But the concept of a good with nonexcludability and nonrivalry in consumption flows directly from the standard assumptions of the neoclassical model. Is it appropriate for a Christian economist to use that concept? Tiemstra does not explain when and how the standard tools of the discipline become an anathema for the Christian economist.

One wonders if Tiemstra’s overall left-leaning posture taints his dislike of neoclassical economics. He argues that unlike “libertarian economists,” who believe a person “is simply mistaken to think he or she has such an obligation toward anyone else,” “liberal or interventionist economists believe that people sometimes behave in a self-interested, hedonistic way, especially when only material values are at stake. But people are concerned about other things as well: stability, security, sustainability, family, and a degree of equality” (p. 52). Perhaps Tiemstra just has his categories wrong. It isn’t “liberal and interventionist economists” who hold the position he defines, but economists in general.

Stories Economists Tell is a fascinating read. Tiemstra is articulate and thoughtful even if one doesn’t agree with all of his criticisms of economics. In his effort to reform the discipline, he makes cogent arguments for consideration of motivations other than material. His strong commitment to the basics of the Christian faith are evident throughout the book, and his efforts to integrate his faith with his academic work are to be commended even if they are not entirely convincing to this reader.