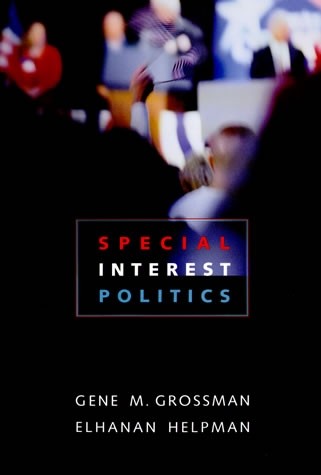 In a theoretical perspective, it is not clear why the study of interest groups is a separate subfield of political economy. After all, the problem of group formation is much like underprovision of public goods or overprovision of externalities. Group theory properly ought to be a branch of democratic theory and deal with the problem of distortions caused by “special” interests. The concept of distortion, however, requires a comparison of outcomes: What does the world of special interests look like, and how does it differ from a (possibly nonexistent) world in which special-interest groups play no role in politics?

This inquiry is more difficult than it might seem because, as Gene M. Grossman and Elhanan Helpman point out in their new book Special Interest Politics, “special-interest groups” (SIGs) admit of no easy definition. Nailing down the key differences between democratic politics and interest-group politics raises the difficulty. The definition used at the outset here is as follows: a SIG is an organization that takes action on behalf of an identifiable group of voters. Other analysts have used an apparently simpler definition: a group of voters with similar preferences. Grossman and Helpman sensibly adopt a definition with some empirical referents. An organization is something we can look for, and an identifiable group is a collection of individuals who resemble one another in some important respect, not just a collection of people with enough shared beliefs to have the potential to share goals and act on them.

The notion of an “interest” group dates from Thrasymachus’s claim in Plato’s Republic that “justice is nothing else than the interest of the stronger.” Throughout much of this dialogue, Socrates and Thrasymachus debate the idea of interest. They find interest difficult to define because it would appear that each person may have both a self-interest and a collective interest, which might conflict. They argue that every “art” or profession has its own interest, which is the “perfection” of that art. In this view, problems may arise. For example, should it be true that “medicine does not consider the interest of medicine, but the interest of the body? . . . no physician, in so far as he is a physician, considers his own good in what he prescribes, but the good of his patient; for the true physician is also a ruler having the human body as a subject, and is not a mere money-maker” (Plato, Republic, Book I). Now, of course, we have the American Medical Association. Is anyone really confused about what this association’s “interest” is?

For Grossman and Helpman, “membership” in a group is defined functionally. Members of a group are those people whose preferences are taken into account by the leader(s) of the group. So the main question they raise is: How do SIGs change the policymaking process? Do lobbyists improve or distort the process by providing information? The largest question is also the most difficult: How and why does money affect the policy process? What form of regulation of campaign finance, if any, would constitute an improvement over the present system?

The first attempt at an “equilibrium” theory of interest groups was Arthur F. Bentley’s Process of Government (Chicago: University of Chicago Press, 1908). Bentley argued that a group is simply a distinct portion of society, and he recognized that any one person may be a “member” of many different groups. Further, as he famously claims in chapter 7: “There is no group without its interest. . . . The group and the interest are not separate.” Finally, in the same chapter, he claims that “There is no political process that is not a balancing of quantity against quantity. There is not a law that is passed that is not the expression of force and force in tension.” To simplify greatly, the advantage of groups, in Bentley’s view, is that they allow intensity of preference to register in policymaking, whereas “pure” democracy ignores intensity. If two people want something very much, and three people oppose it only a little, then the two people will win. Interest-group politics weights by intensity, and the strongest political force determines the policy outcome, just as Thrasymachus would have wanted.

Grossman and Helpman are more skeptical of this claim, drawing on both the hindsight of nearly a hundred years and a much more precise model for capturing the intricacies of group competition. Their main results offer both some standard conclusions and some more surprising ones.

First, SIGs can distort the process, sometimes dramatically, compared to what happens in a full-information world. Because that world is not the world of modern politics, however, it is not clear that this “distortion” should be a focus for policy.

Second, the effects of lobbying may be counterintuitive. If two well-organized groups contest a policy, the information provided by lobbyists may result in a “distortion” that actually improves policy by moving it closer to the full-information ideal, in contrast to what happens in a world in which lobbying is outlawed. Further, lobbying organizations themselves may be made worse off by the availability of a lobbying strategy. More precisely, if members of interest groups must pay the lobbying costs and the net result is worse for them, they might well prefer an equilibrium where lobbying was outlawed. Something close to an “invisible hand” result may be lurking here: lobbyists pay to provide information that improves the quality of legislative debate and choice because competition forces them to participate to avoid an even worse outcome.

Some of the other interesting discussions involve “access fees” for legislators, the information content of lobbyists whose bias is known, and the value of grassroots lobbying of voters by interest groups (through direct contact). The depth and scope of the literature Grossman and Helpman review and the range of topics they consider in this book are impressive. Much of the exposition is accessible, although the meat of the work is in the model developed in chapters 4–10. Grossman and Helpman’s book may be the most ambitious and successful work on interest-group politics in the past decade.