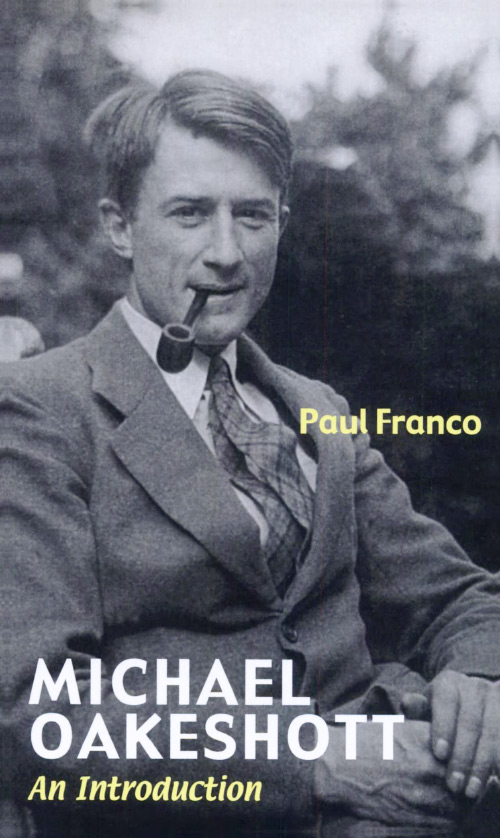 Michael Oakeshott
An Introduction
Paul Franco
Hardcover Paperback
This book review appeared in the Fall 2005 issue of The Independent Review.

Michael Oakeshott was one of the most elusive and intriguing intellectuals of the twentieth century. He received a doctorate in history from Cambridge University, first published extensively on religion, wrote what was possibly the last major book of the British idealist tradition in philosophy, and was considered by many to be the leading commentator of his time on Hobbes. The great British historian, philosopher, and archaeologist R. G. Collingwood referred to Oakeshott’s first effort at a philosophy of history as “a brilliant and penetrating account of the aims of historical thought and the character of its object” (The Idea of History [Oxford: Oxford University Press, 1946], p. 153). Oakeshott also wrote on aesthetics, morality, education, and even horse racing (he coauthored a book called A Guide to the Classics, a primer for picking winners at the track), and achieved his greatest fame as a political theorist. How can anyone sum up such a career in a single, brief book?

Despite such a daunting task, Paul Franco has produced an engaging account of Oakeshott’s ideas that is both suitable for readers new to the British philosopher and enlightening to long-time Oakeshott aficionados. Of particular interest to the latter will be Franco’s success in relating his subject’s thought to that of his contemporaries, a matter to which Oakeshott himself paid little attention.

Franco’s achievement is even more notable because although Oakeshott often revised his opinions, sometimes dramatically, he rarely paused to explain why he did so, seemingly concerned only with expressing his current view. Even in politics, the field in which he received his greatest recognition, he is not easy to pigeonhole. He is usually categorized as a conservative—a label he embraced at times—but many libertarians, liberals, and communitarians have drawn inspiration from his work.

Because space does not permit discussion of every aspect of Oakeshott’s thought Franco considers, I touch on a few highlights, hoping to inspire my readers to discover the rest for themselves. Oakeshott’s intellectual roots lie in the philosophical idealism of Hegel and his late-nineteenth-century British followers, such as T. H. Green and F. H. Bradley. Oakeshott’s first book, Experience and Its Modes, is an uncompromising argument for idealism. Here Oakeshott declares that reality simply is experience, a “concrete whole which analysis divides into ‘experiencing’ and ‘what is experienced’” (p. 40). As Franco summarizes Oakeshott’s metaphysics, “The objects of experience are not independent of our experiencing of them but are constituted by mind or thought” (p. 40). However, that does not mean that Oakeshott believed “that the subject of experience is the sole reality and the cause of what is experienced”

(p. 40). Like Hegel and the British idealists preceding him, he was an “objective idealist,” insisting that the ideas composing experience are real ideas, not merely subjective fancies—for example, the experience of falling off of a high cliff will lead consistently to the experience of having a smashed-up body, however much the subject of the experience tries to believe otherwise. It is the inescapable regularity with which certain experiences follow upon others that makes the world of experience a reality to which humans must adjust their thinking, rather than a dream or a fiction.

Franco makes a convincing case that Experience and Its Modes features a motif that sounds throughout Oakeshott’s subsequent work: experience is composed of distinct modes, or what Oakeshott would later call “platforms of understanding.” In this early work, he holds that with the single exception of philosophy, all human attempts to understand experience represent “modal arrests” in which the full, concrete reality of “experience without reservation or presupposition” is set aside in favor of a partial and abstract understanding (p. 42). He proceeds to examine the modal character of science, history, and practical life. Because each mode grapples with experience from a fundamentally distinct perspective—science seeks a world of completely objective quantities, history deals with a world of what is purely past, and practice pertains to a world calling for improvement through human agency—none of them offers a position from which to critique the ideas arising in a different mode. Franco contends that Oakeshott was particularly concerned about safeguarding religion, which he considered to be the pinnacle of practical life, from scientific and historical attempts to “debunk” faith. Oakeshott considered such criticism guilty of irrelevance. Religion is the sole relief, within the practical world, from the otherwise ceaseless pursuit of satisfactions, the achievement of which only gives rise to new desires. What matters about a creed is not its conformity with the findings of science or history, but the role it plays in the believer’s practical life.

Oakeshott later abandoned the idea of an unbridgeable chasm separating the modes, coming to regard them as the “voices in the conversation of mankind” and therefore able to engage each other in discussion. He also demoted philosophy from its role as concrete experience itself to that of commentator on the character of the other voices. Nevertheless, the idea that each mode is autonomous remained central in his thought.

Franco argues that Oakeshott’s political ideas arose naturally from his philosophical views. Because philosophy is not merely a more rigorous examination of commonsense ideas but is instead experience itself viewed from a vantage different from that of practical life, it is not in a position to expound abstract rules or a priori principles that can direct everyday conduct. Oakeshott’s analysis of Plato’s famous Allegory of the Cave is a wonderful illustration of how he conceives the relationship between theory and practice. He regards Plato as correct in viewing the theorist who turns his back on the shadows on the cave walls and ascends toward the light as achieving an understanding superior in a sense to that of his fellows who remain concerned only with practical affairs. However, Oakeshott dismisses Plato’s conclusion that as a result the theorist can dictate correct practice to those who remain behind in the cave. Their focus on the practical world produces genuine knowledge for dealing with the shadows. The philosopher may interest the horseman when he declares that his philosophy has revealed that “horse” is really an aspect of God, but if the philosopher then insists on lecturing the horseman about the proper handling of horses, despite not being able to tell a horse’s head from its nether regions, the horseman will rightly regard the fellow as a charlatan.

Consequently, Oakeshott derides as “rationalism in politics” any ideology that proposes the wholesale reconstruction of traditional social institutions, customs, and morals on the basis of some theoretician’s fantasy. (That phrase became the title of his most famous book.) Such an effort will never succeed because abstract principles cannot by themselves generate a concrete practice. However, attempts to force a society to fit some abstract mold are likely to do significant damage to traditions grounded in centuries of practical experience. Oakeshott directed the bulk of his scorn for such schemes at the social planners of the left, but he also criticized several thinkers of the right, who might have seemed his natural allies, for sharing this mistaken notion. For example, commenting on F. A. Hayek’s Road to Serfdom, he wrote that “a plan to resist all planning may be better than its opposite, but it belongs to the same style of politics” (qtd. p. 85).

Central to Oakeshott’s last major work on politics, On Human Conduct, was his conception of “civil association” and “enterprise association” as fundamentally different types of human relationship. In an enterprise association, individuals are related by their agreement to cooperate in pursuing some substantive end—for example, the participants in the Coca-Cola Corporation hope to make money by selling soda. In contrast, members of a civil association have no such goal in common; they are related in their recognition of a body of law that delimits the acceptable means that they may employ in pursuing their own, diverse ends. Different strands of European political thought have characterized the state as either an enterprise or a civil association, and Oakeshott sees these competing characterizations as a major source of the confused nature of the modern European state. His sympathies clearly lie with those who conceive the state as properly being a civil association, which he regarded as the most civilized conception of the role of the state. He noted that a compulsory enterprise association—for example, a state attempting to achieve some desired distribution of income—cuts “the link between belief and conduct which constitutes moral agency” (qtd. p. 170). Franco does not seem to grasp fully Oakeshott’s argument against compulsory enterprise association, remarking, “[it] seems to relate only to the extreme or totalitarian case” (p. 170)—as though being forced to work toward an end one has not freely chosen is unproblematic if it is only for a few hours per week.

Some of the conclusions Oakeshott arrived at in contemplating these modes of association seem especially relevant today. Because modern warfare tends to encompass all aspects of the combating societies, it strengthens the tendency to regard the state as an enterprise association: “War in a modern ... state is the enemy of civil association” (qtd. p. 168). The currently popular notion of “nation building” rests on “‘one of the most insidious current misunderstandings of political activity,’ the misunderstanding in which the arrangements of a society are made to appear, not as manners of behaviour, but as pieces of machinery to be transported about the world indiscriminately” (qtd. p. 91). Here, Oakeshott seems to be presciently describing the pundits who today propose that the American state forcibly remold all others in its own image.

Franco’s book is not without flaws. A relatively minor one is that the index is too limited. Of greater significance are a handful of passages in which the author apparently felt compelled to nod to political correctness in his exegesis.

For example, Oakeshott believed that a liberal, university education should not be mistaken for vocational training. It ought to offer a “respite from the ‘danse macabre of wants and satisfactions’ that currently dominates the world” (qtd. p. 123), leading the student to see himself “in the mirror of [the] historic and contingent inheritance” that makes up his civilization (qtd. p. 120). Given that view, Oakeshott naturally was distressed by the wave of career-oriented students who arrived at British universities in the wake of World War II. Franco declares such antiegalitarianism to be “the most glaring ... failure” of Oakeshott’s philosophy of education, and faults him for neglecting “any sort of consideration of equity” (p. 124). However, such a concern would be inconsistent with Oakeshott’s conception of liberal education, which emphatically denies it the task of boosting the student’s future earning power or career prospects. It is difficult to see how Franco can admire Oakeshott’s overarching idea but reject one of its logical consequences.

These complaints notwithstanding, I whole-heartedly recommend this excellent book to both newcomers to and old hands at the ideas of one of the most important thinkers of the past century. Anyone seriously interested in the philosophy of politics, the social sciences, or history should not neglect Michael Oakeshott’s thought.