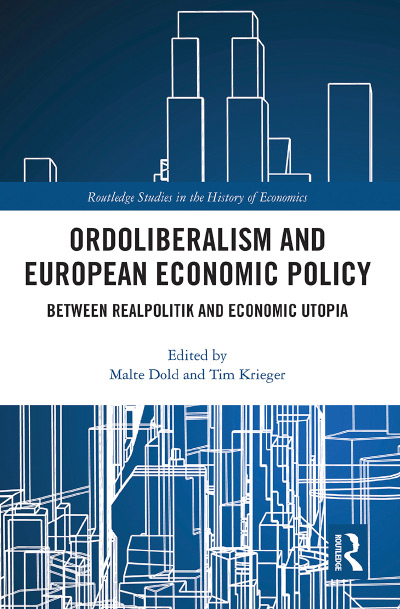 Ordoliberalism and European Economic Policy
Between Realpolitik and Economic Utopia
Edited by Malte Dold and Tim Krieger
Kindle Hardcover Paperback
This book review is a web exclusive for the Winter 2021/22 issue of The Independent Review.

Ordoliberalism — with the Freiburg School around Walter Eucken and Franz Böhm as its core community and theoretical nucleus — is a German intellectual tradition of political economy. This volume provides international access to ordoliberal scholarship. The book is divided in three parts with a foreword by Wolfgang Schäuble, a politician from the Christian Democratic Union (CDU) and former Federal Minister of Finance and Bundestag President. The first part deals with the foundations and discusses the roots of ordoliberalism. At the heart of the second part, the authors wrestle with the question of the pros and cons of a rules-based framework. The third part focuses on how ordoliberalism can enhance their research program and contribute to answering the big questions of tomorrow.

Stefan Kolev contextualizes the Freiburg School as one of the neoliberalisms that emerged during the interwar period to renew liberalism. But rethinking liberalism was not their only aim, they attempted to find answers to the most pressing politico-economic questions of their time, among others the social questions and the reestablishment of competition in the disintegrated global market. Kolev’s aim is to show why the German scholars were neither isolated nor idiosyncratic thinkers. Hence, he elucidates how ordoliberalism produced a political economy rather similar to the one contemporaneously evolving in London, Geneva and the “Old Chicago” of Frank Knight and Henry Simons.

Gerhard Wegner juxtaposes the experiences made during the time of the relatively stable Kaiserreich until 1914 to the polarized climate of the Weimar Republic. In particular, he elucidates how that experience had shaped the ordoliberal views of a stable political climate and why they were skeptical of mass democracy. This experience had an immense influence on their later scholarship regarding a stable rules-based framework with binding pre-commitments to constrain the political process and their policy arbitrariness.

Josef Hien explores the religious differences that divided Europe into a predominately Protestant North and Catholic as well as Orthodox South. In order to support his argument, Hien uses a comparison between two center-right parties, the Democrazia Cristiana (DC) in Italy and the Christian Democratic Union (CDU) in Germany. The CDU had both a Catholic and a Protestant wing, with opposing ideas of the state, society, and the economy. This clash of ideas impacted the CDU by balancing pro-market and pro-state ideas within party politics. The DC was a predominately Catholic party. The influence of Catholic social thought led to more interventionist and corporatist policies. With the comparison between the CDU and DC, Hien outlines how religion can influence economic policymaking.
Volker Berghan’s contribution is similar but focuses on Social Catholicism. The chapter mainly describes the impact of Cardinal Joseph Höffner and Oswald von Nell-Breuning within the CDU and their contribution to Catholic social thought. Both thinkers were advocates of overcoming the conflict between capital and labor and pleaded for a more inclusive economy, with workers gaining more rights within companies.

For the political economist Kenneth Dyson, ordoliberalism is most of all a mindset. He sees this mindset as being:

... grounded in a hybrid liberal-conservative ideology; in a distinctive set of ethical commitments when thinking about political economy; in a rejection of both collectivism and the laissez-faire liberal state; in a recognition that the chief danger to liberalism can come from within; in opposition to a naturalistic conception of the market as a self-correcting mechanism that enshrines competition; and in the belief that a flourishing and sustainable liberal order requires a disciplinary framework of binding precommitments.” (p. 91).

Perhaps the most critical chapter comes from the macroeconomist Rüdiger Bachmann. Ordoliberalism is for Bachmann an “intellectual zombie” (p. 115), whose existence can be explained by economics being taught alongside law. In his view ordoliberalism is a form of economics that resembles the continental law tradition with its rules-based framework (p. 116). Bachmann’s claim is that since its founding, ordoliberalism has not evolved as a research program. Annoying for Bachmann is the resistance of the older-generation ordoliberals to use modern quantitative research methods of state-of-the-art economics.

In Part II, the late Wolf Schäfer takes a critical stance that since the Euro crises, ordo-averse rules have been put in place. He laments the EU’s tendency towards more communitarization, redistribution and discretion. Schäfer proposes a return to rules-based ordoliberal principles by strengthening the subsidiary principle which is the foundation for the European treaties.

Former ECB chief economist, Otmar Issing reflects back on the D-Mark and the introduction of the Euro. From his perspective, the ECB has a clear mandate to maintain price stability and conduct monetary policy free from political interference. Issing warns that the heterogeneous economic and fiscal policies within the Eurozone can make fulfilling the mandate towards price stability ever more difficult to achieve.

As specialists in public finance, Johannes Becker and Clemens Fuest summarize the three main explanations of how the Euro crises came about. The crisis was mainly an institutional failure. In their own words, “The euro crisis was caused by overly lax banking regulation, ineffective sovereign debt rules, and a lack of institutions able to deal with crises” (p. 139). Their main argument is that the ECB has a clear mandate, while the member states are driven by political competition which leads to free-riding. Hence, the main problem of the Eurozone is a commitment problem. New institutional mechanisms are necessary to improve the resiliency of crisis management within the Eurozone.

Macroeconomist Oliver Landmann contributes a chapter that resembles Bachmann’s critique. He argues that ordoliberlaism is too rigid for developing a crisis management strategy able to act during a crisis. Landmann criticizes the focus on rules and highlights the risk of failed macroeconomic stabilization that can actually help in a moment of crisis.
Norbert Berthold’s chapter is the very stark contrast. He puts forth “Ten commandments to overcome the eurozone’s many crisis.” This contribution could be put in the category of older ordoliberal thinking, an example of ordoliberal economics what is likely to annoy Bachmann. However, Berthold elucidates the no-gos of centralization and how “a firewall” can be installed against it. His contribution reflects on what a minority in Germany would do for the survival of the Eurozone.

The political economist Michael Wohlgemuth elaborates a model of flexible integration in various policy areas of the EU. This chapter is based on theoretical work of F.A. Hayek, Wilhelm Röpke and James M. Buchanan. Wohlgemuth combines the best of two worlds: 1) universal common rules in policy areas that are legitimized on the European level, and 2) the flexibility of competing policy solutions in areas where more differentiation can serve as a discovery procedure for institutional learning (p. 183).

For Thomas Biebricher, the heart of ordoliberal thinking consists of rules-based constitutionalization, legal constraints, and the technocratization of politics. That raises problems of political legitimacy within contested policy areas. His argument is that when distributional issues must be decided, these decisions need political legitimacy by the majority, but Biebricher identifies the friction of ordoliberal thinking in the political process itself.

Part III continues with Julian Dörr, Nils Goldschmidt and Alexander Lenger taking a novel direction and combining the work of Walter Eucken, Alexander Rüstow and Amartya Sen. The authors promote the idea of taking social policy and cohesion policy with the EU to the next level. The aim is a stronger EU from the bottom-up, in which citizens can relate to specific policies that benefit them and strengthen a positive attitude towards the institutions of the European Union.

In a similar fashion Brigitte Young promotes the importance of social policies.

The ordoliberal economists Lars Feld and Ekkehard Köhler advocate a positive research program that can “analyze theoretically and empirically, while taking into account the institutional environment, how an economic and political order may be constructed that is responsive to the citizens’ common interests” (p. 243). Both think that ordoliberal scholarship should be methodologically open for cutting-edge research in other domains.

In the closing chapter, both editors summarize the four core ideas of ordoliberalism and embrace the normative stance for ordoliberalism. The editors promote the idea that ordoliberal scholarship should embrace its tradition of interdisciplinary thinking; study the big questions which is a contrast to academic specialization. In addition, the direction of ordoliberal scholarship should be within Philosophy, Politics, and Economics (PPE) and support the liberal project. The research program should be empirically open, but simultaneously not shy away from normative debates. Their bottom-line is that elevating the legacy of the Frieburg School academically with a clear focus on framework-oriented scholarship is desirable and feasible for a new generation of ordoliberal scholars.