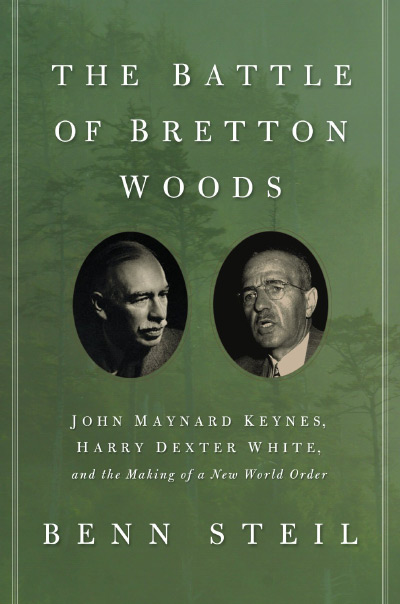 On July 1, 1944, less than a month after Allied forces stormed the beaches of Normandy, 730 delegates from forty-four nations gathered at the Mount Washington Hotel in Carroll, New Hampshire—an area more commonly known as Bretton Woods. With the White Mountains serving as a backdrop, the participants spent three weeks designing multilateral institutions to facilitate international economic cooperation after the war. To paraphrase Vassar economist and American delegate Mabel Newcomer, there was little time for hiking. Two of these institutions, the International Monetary Fund and the International Bank for Reconstruction and Development (the first of two institutions that compose the World Bank), continue to play significant roles in the global economy nearly seventy years later.

In his new book The Battle of Bretton Woods, Benn Steil provides a wellresearched and interesting account of the historic monetary conference. Steil is currently a senior fellow and director of international economics at the Council on Foreign Relations. He draws heavily on archival evidence and clearly explains the motivations underlying the complex interactions leading up to, during, and immediately following the Bretton Woods meeting. His efforts make for an enjoyable read.

At its core, Steil’s book is a story of two men battling in the midst of a power transfer from Britain to the United States. An aging but nonetheless quick-witted JohnMaynard Keynes attended the conference as a British delegate. He was easily the most famous participant, a celebrity economist with ballerina wife in tow. Indeed, the U.S. Treasury feared he might steal the show. “[T]hey could not let theman near the podiumon opening day” (p. 202).And although Keynes was an important figure at the conference, Steil writes that he was ultimately “shunted off to head a commission dealing with the bank,” widespread agreement over which hadmade it a mere “peripheral” concern (p. 197).

Keynes comes across as more of a pundit than an economist in Steil’s book, an advocate of “anti-Bolshevist Middle Way–ism” (p. 76). “Though he was a deep skeptic on the benefits of trying to engineer social change,” Steil writes, “he had almost unbounded faith in the ability of experts to engineer the proper fixes for whatever economic ailments might afflict the nation at any point in time” (pp. 78–79). Many members of Congress viewed him as nothing more than “a slick-tongued, aristocratic bamboozler” (p. 202). And they were arguably justified in doing so: Keynes was “firmly entrenched within the British political establishment” (p. 96). He would do everything in his power to ease the plight of the fading empire.

Unfortunately for Britain, Keynes did not have much power. War debts had left the British delegation in a poor bargaining position. And Keynes’s condescending tone only made matters worse. His idea for an international reserve asset, known as “bancor,”was scrapped well before the July meeting. He could not get the bank or the fund located in London—or, once it was clear both would be based in the United States, in New York. After the war, he failed to secure an interest-free loan for Britain. Indeed, his negotiating was so poor in this instance that on December 6, 1945, Britain settled for a worse deal than had been offered two months earlier. Yet, with every defeat, Keynes managed to spin a more favorable account of events. As such, Steil concludes, “Keynes was at least as concerned with maintaining his standing in the process as he was with molding the actual terms” (p. 187).

Opposite Keynes at BrettonWoods was Harry DexterWhite.White had joined the U.S. Treasury on invitation of University of Chicago economist Jacob Viner in 1934 to assist with a study on the U.S. monetary system. With a “preternatural ability to explain technical subjects clearly and carefully, and to relate economic principles to actual international political circumstances,” he quickly became an important advisor to then– treasury secretary Henry Morgenthau. His efforts to establish a foreign-policy role for the Treasury—contesting jurisdictional boundaries with the State Department—ultimately led to an “informal promotion” from Morgenthau in December 1941 to “assistant secretary (a made-up title not to be confused with the formal position ‘Assistant Secretary of the Treasury’)” (p. 58). In this position, White would draft his plan for the postwar international monetary system and solidify his place in history.

While working at the Treasury, White was secretly moonlighting as a Soviet spy. He passed confidential information to Moscow through handlers, helped like-minded analysts rise through the ranks at Treasury, and, according to some accounts, was used to provoke the Japanese attack on Pearl Harbor. After the war, he arranged for the Soviets to get duplicate plates for the Allied marks circulating in Germany. The Soviets used these plates to print roughly 78 billion Allied marks—more than seven times the amount put into circulation by the Western Allies. White would testify before the House Un-American Activities Committee in August 1948, denying he was anything more than “an American in the Progressive tradition” (p. 319).

Whether White was fully committed to the Communist cause or merely aimed at strengthening U.S.–Soviet relations is unclear. Like Keynes, he “admired the economic machine, but was looking for the dials government might fiddle with to make it run better” (p. 20). Did White believe this would require minor tinkering or full-scale planning of important sectors of the economy? The sharp contrast between his public and private writings—explored in great detail by Steil, who unearths a hitherto overlooked manuscript written byWhite—precludes answering such questions definitively.

Informal though his promotion may have been, White was not one to let such an opportunity go to waste. By March 1942, he had completed a draft of the so-called White Plan, a blueprint for the postwar international monetary system. With Morgenthau somewhat uninterested in the proposal’s technical aspects, White became the principal architect of the conference. He hosted a pre–Bretton Woods drafting session with fifteen delegations in Atlantic City, where he learned which aspects of his proposal were likely to encounter opposition at the Mount Washington Hotel. Then, having appointed himself chairman of the commission dealing with the International Monetary Fund and global currency regime at Bretton Woods, he was able to shape the outcome in his favor. The result was a Bretton Woods agreement that closely resembled the White Plan.

The Bretton Woods system—whereby the exchange rates of member-country currencies were fixed to the dollar, and foreign governments and central banks could exchange dollars for gold at $35 per ounce—was designed to reduce trade barriers and allow capital to flow freely between member countries. “The pre-1914 gold standard,” Steil points out, “had achieved both of these aims to an historically unprecedented degree, without any complex, formal international agreement . . . . But the gold standard had been made the bogeyman for all the errors of monetary policy in the 1920s” (p. 128). As such, a return to the classical gold standard was not politically palatable. “To be sure, the gold standard was dead and buried. Monetary rules were out; autonomous national government discretion was in” (p. 34).

Steil is perhaps at his best when articulating how the Bretton Woods system differed from the classical gold standard—a difference that would ultimately lead to the failure of Bretton Woods. The classical gold standard provided “an automatic mechanism for regulating the price of credit and the cross-border flows of gold. . . . It was the very fact that governments refrained from taking action to block foreigners from redeeming paper currencies for gold that made the pre-1914 gold standard so successful in promoting global economic integration. . . . White’s plan involved no mechanism to ensure that the United States would operate a monetary policy consistent with maintaining adequate gold stocks. In fact, the system virtually ensured the opposite. . . . White’s scheme contained a built-in tendency for more and more dollars to be forced into circulation around the globe. With proportionally less gold to back those dollars, there would be a rising likelihood of foreign holders of dollars panicking and demanding gold all at once” (p. 132). As Steil explains, the lack of an automatic mechanism ultimately brought the Bretton Woods system to an end with Nixon’s decision to close the gold window in 1971.

Recent financial crises in the United States and Europe have renewed interest in monetary reform. Yet many economists and most politicians balk at a truly automatic mechanism for monetary policy. Like Keynes and White, modern reformers put their faith in technocrats, who fiddle with the dials at their own discretion. Steil’s excellent book should serve as a gentle reminder of which monetary systems have worked well in the past—and which of them should not be repeated.