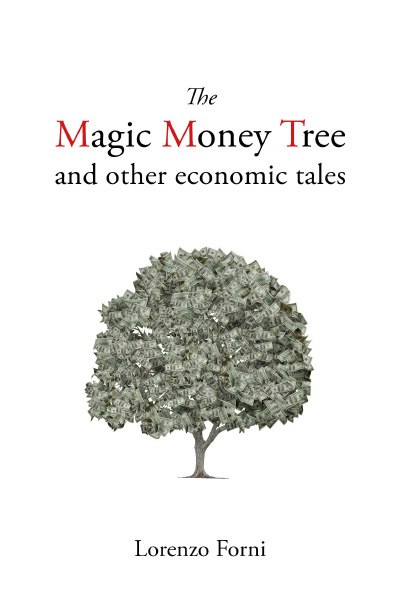 The Magic Money Tree and Other Economic Tales
By Lorenzo Forni
Kindle Hardcover Paperback
This book review is a web exclusive for the Spring 2022 issue of The Independent Review.

Economists and politicians have always had a tense relationship. This is hardly surprising. The central lessons that economists often try to convey—that scarcity is unavoidable, that resources are finite, that nothing is free—aren’t exactly well-suited to win them a lot of popularity contests among politicians or their voters.

As a former economist at the Central Bank of Italy and the International Monetary Fund, Lorenzo Forni knows this tension fully well. He’s also well aware that his latest book, The Magic Money Tree and Other Economic Tales, won’t make him the toast of many political cocktail parties. However unpopular his call for monetary and fiscal restraint may be, his message couldn’t come at a more important time.

As the title suggests, Forni’s primary goal is to refute the increasingly popular notion that we have entered a “new normal” where the old monetary and fiscal orthodoxies no longer apply. Contrary to what many politicians and pundits want to hear, Forni forcefully argues that the spiraling national debts and ballooning central bank balance sheets that have characterized the better part of the past two decades following the Great Recession and COVID-19 pandemic cannot be maintained forever. As he asserts at the outset of his book, even though these desperate times have required policymakers to adopt unprecedented measures, “the main principles of economics remain unchanged” (p. 3).

Forni’s book revolves around a central theme: “budgetary constraints must be respected” (p. 5). For economists, this idea is hardly novel or controversial. But for policymakers, it is both novel and controversial, and its implications are rather sobering.

Chapter 1 details the tension between economists and politicians over the reality of budget constraints. As an economist at the Central Bank of Italy and the IMF, Forni had a front-row seat to this clash and has seen firsthand the ramifications of fiscal profligacy and monetary mismanagement. Throughout the book, he skillfully weaves in examples from his own experience working at the intersection of economics and politics. At the end of the first chapter, he outlines the two main budget constraints that every nation faces (pp. 28 – 32): domestic (i.e., its government budget deficit) and external (i.e., its balance of payments with foreigners). In the short run, he concedes, a nation can accumulate fairly substantial sovereign debt and trade imbalances. But in the long run, these budget constraints must inevitably be restored. The question that policymakers must ultimately grapple with is whether they will be restored with relatively little short-term pain through prudent policy reform, or with the severe pain of a long-term economic crisis.

The rest of the book outlines the mechanics of how these budget restraints are restored over time. Chapter 2 addresses the limits of monetary policy. Forni draws on his extensive knowledge of the international economy to explain how easy credit policies ultimately corrode economies, using Belarus and Argentina as illustrative examples. Though monetary policy has an important role to play in providing a short-run boost to an economy during recessions, he argues, it is no “magic potion” capable of delivering long-run growth (p. 60). In the long run, excessive reliance on the printing press only results in inflation and currency devaluation, which painfully restore a nation’s domestic and external budget constraints. Forni concludes this discussion by making a strong case for central bank independence. In many ways, his arguments mirror those outlined by Peter J. Boettke, Alexander W. Salter and Daniel J. Smith in their new and important book Money and the Rule of Law (Cambridge, Mass.: Cambridge University Press, 2021). Both books argue that an independent central bank is critical because it helps ensure that politicians and policymakers (who tend to have shorter time horizons since their primary goal is often to get reelected or reappointed) avoid the temptation to chase the short-run high that comes from printing too much money.

In chapter 3, Forni shifts his attention to fiscal policy. This chapter contains arguably the most insightful analysis in the entire book. Citing Egypt as an example, Forni explains how government budget deficits often lead to trade balance deficits (the dreaded “twin deficits”) and a depressed economy. Though the mechanics of how excessive monetary policy and fiscal policy affect the economy may vary a bit, the end result is the same: the budget constraint always re-emerges, often after the pain of a balance of payments crisis, high inflation and currency devaluation (pp. 70 – 73). Forni concludes the chapter by debunking the oft-repeated notion nowadays that expansive government deficits “pay for themselves.” He disparagingly likens this idea of a fiscal free lunch to the Biblical story of the miracle of loaves and fishes. Governments shouldn’t expect miracles! Citing empirical evidence from around the world, he concludes that the odds of expansive fiscal deficits actually paying for themselves are extremely unlikely. This is in large part because the types of public spending that might actually “pay for themselves” by spurring higher long-run growth (e.g., cost-effective investments in education, infrastructure, etc.) are “unlikely to be at the top of politicians’ agenda” because they often do not have much of an effect in the short-run (p. 82).

The final three chapters detail a variety of real-world examples of what happens when budget restraints are not respected. Chapter 4 details the dangers of trying to avoid the budget constraint through currency devaluation or default. In either case, the day of reckoning cannot be avoided, and economic hardship is inevitable. Sadly, the burden of these hardships is often borne by the poor and working-class citizens. Chapter 5 extends this analysis to advanced nations like the United States and China to show that even economic powerhouses are constrained by the discipline of budget constraints. Advanced economies may be able to get away with reckless policies for longer, but even they must eventually face their comeuppance. The sixth and final chapter delves into Italy’s hard-learned lessons on the reality of the budget constraint over the past few decades, which Forni is uniquely well-positioned to discuss given his personal and professional experience. He concludes by returning to his central theme, arguing that respect for budgetary constraints represents the “cornerstone of good macroeconomic policy” (p. 146) and “the absolute foundation of economics” (p. 147).

In many ways, Forni’s book represents a modern-day extension of Milton Friedman’s There’s No Such Thing as a Free Lunch(LaSalle, Ill.: Open Court, 1975). It also fits nicely into the catalogue of contemporary books in this vein like Caleb S. Fuller’s No Free Lunch (Warrenton, Va.: Freiling Publishing, 2021) and David Bahnsen’s There’s No Free Lunch (Brentwood, Tenn.: Post Hill Press, 2021). While these other books largely focus on policy debates that take place at the microeconomic level, Forni extends this “no free lunch” analysis to some of the most critical macroeconomic policy debates of our day. For this reason, Forni’s contribution could not come at a more opportune time. Nowhere is the “free lunch fallacy” more prevalent today than in the realm of macroeconomics. After 15 years of unprecedented monetary and fiscal expansion that have thus far not resulted in major upticks in inflation or interest rates, far too many mainstream macroeconomists have been lulled into thinking that (to borrow a phrase made famous by Carmen Reinhart and Kenneth Rogoff) “this time is different”—that perhaps the old rules no longer apply. In this strange setting, newfangled ideas like Modern Monetary Theory have spread like a virus, finding welcome hosts in politicians and pundits who desperately desire some pseudo-economic rationale for their extravagant spending proposals.

Forni’s focus on these macro-level issues therefore represents an important contribution to literature on the economics of public policy. After all, economists generally agree that there is no free lunch when it comes to a variety of microeconomic policy debates. This was powerfully illustrated by the chorus of economists who condemned a December 2021 article in The Guardian arguing for a return to price controls to combat inflation (this included a scathing critique from progressive economic icon Paul Krugman, who in a Twitter thread described the idea as “truly stupid”). Sadly, as Forni aptly points out, this virtual consensus of economists doesn’t exist to condemn a whole range of equally dangerous macroeconomic ideas like the notion that printing money won’t lead to inflation, that deficits don’t matter and that government spending programs pay for themselves. These are precisely the sort of economic fallacies that Forni tries to combat, and he dismantles them tactfully throughout.

Despite its many attributes, the book does suffer from some shortcomings. The most notable is that as good of a job as Forni does at diagnosing various problems and disputing the economic fallacies that give rise to them, he does a fairly poor job of proposing concrete solutions. The final few pages of the epilogue (pp. 149 – 152) do hint at some vague fixes—namely, imposing rules on both monetary and fiscal policymakers that restrict them from chasing short-run economic stimulus that jeopardize long-run economic growth. Unfortunately, his explanation of how we can transform these lofty goals into practical policy reforms is woefully underdeveloped. The book would benefit from a more concrete description of what a rules-based approach to monetary and fiscal policy would look like in practice, as well as specific examples of successful rules-based reforms that have been enacted in other countries.
Many parts of the book would also benefit from a deeper discussion of insights from public choice economics. Although he doesn’t explicitly reference it anywhere, Forni’s analysis of how political self-interest is often at odds with what is in the best interest of the general public closely resembles the analysis of public choice economists like James Buchanan and Richard Wagner. Ultimately, these authors do a more satisfactory job of outlining what kind of practical reforms would help deliver a more rules-based approach to fiscal policy. The aforementioned book by Boettke, Smith and Salter also does a better job of describing specific reforms to our monetary and banking system that would deliver a more rules-based financial system. Readers who are interested in learning about concrete policy reforms might therefore be better served reading these other works.

All in all, Forni’s book represents an important and timely contribution, and one that is accessible to both the economist and the informed layman. His clarion call to restore monetary and fiscal sanity is one that we simply can’t afford to ignore any longer, even if it means getting invited to fewer cocktail parties.