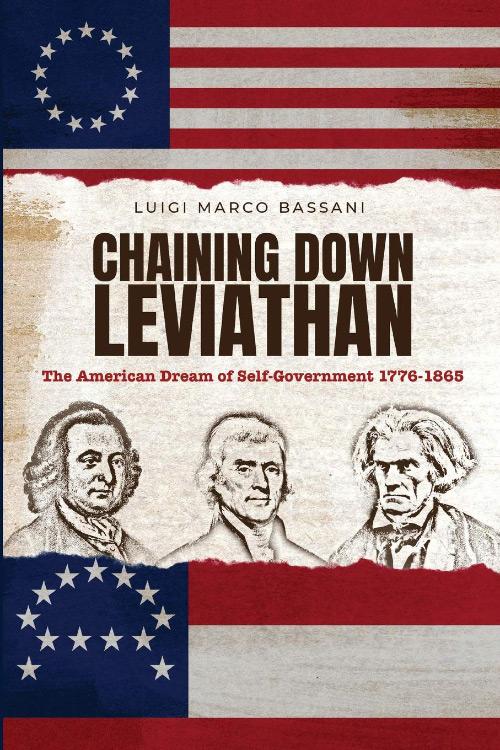 Chaining Down Leviathan
The American Dream of Self-Government, 1776–1865
By Lugi Marco Bassani
Kindle Paperback
This book review is a web exclusive for the Fall 2021 issue of The Independent Review.

Most Americans would deny that a fundamental difference exists between the theory of government in the United States and Europe. Our government in Washington, D.C., appears to wrestle with many of the same issues (e.g., healthcare, old-age pensions, and minimum wages for workers) as the regimes in Paris, Berlin, and London. Legislated policy solutions occasionally differ in scope, but the power to act on these issues seems equal. While the perception of sameness is understandable based the average American’s experience and observations, it was not meant to be.

In Chaining Down Leviathan, Lugi Marco Bassani of the University of Milan argues that the system of American federalism was an explicit rejection of the modern state that had developed in Europe. The hallmark of the modern state, Bassani contends, is “the centralization of power” (p. 24). Bassani describes how in the fifteenth and sixteenth centuries “the modern state began its long journey when absolute monarchs created a single decision-making center of command” and continued to grow in the era of parliamentary supremacy.

Federalism, for Bassani, “was the single most important element that separated the American republic from the European political world” (p. 47). With federalism, Americans rejected Jean Bodin’s theory that sovereignty is indivisible and thus cannot be shared by separate agents. In the United States, the idea of sovereignty served “an eminently anti-statist function” inasmuch as the several states operated “as a limit on the consolidation of the Union” (p. 63). In Europe it was the “bulwark of the construct of the state” and its claims to absolute power (p. 63).

In making his case on the centrality of federalism, Bassani shows how the fight against centralization was the heart of the American Revolution. The Revolution, of course, was no mere tax protest. It was a contest between a two competing views of the British Empire. The British Parliament claimed absolute authority to legislate for the American colonies, whereas the Americans believed the empire “was a free association of independent political communities, with the Crown as the guarantor of the various autonomies” (p. 67). War naturally erupted when George III sided with Parliament against the colonial assemblies.

The Revolution resulted in a confederation of free and independent states that governed themselves via state assemblies but formed a league to deal with continental concerns. The Articles of Confederation were a great success inasmuch as the Americans defeated a superpower and secured the rights of self-government. However, because of circumstances such as the enormous war debt and unsuccessful attempts at providing the Confederation Congress an independent source of revenue such as an impost, the Philadelphia Convention in 1787 offered the people of the several states a new constitutional charter. At the heart of the Constitution, Bassani avers, was the “distribution of powers between the States and the federal government, each exercising perfect political power within their spheres of competency” (p. 81).

The general government’s powers were augmented under the Constitution and caused many Anti-federalists to fear a consolidation reminiscent of the British state from which the colonies had rebelled. Bassani describes the Anti-federalists as “the first conscious champions of American resistance to the modern state and to importing the European model” (p. 93).

Chaining Down Leviathan examines the arguments of the Anti-federalists and then transitions to the early Republic and the conflicts between Thomas Jefferson and Alexander Hamilton. Bassani looks at the emergence of American political parties, the states’ rights doctrine as presented in the Kentucky and Virginia Resolutions, New England’s embrace of decentralization at the Hartford Convention, and other episodes in the relationship between the states and general government.

When considering the political thought of John C. Calhoun, Bassani lingers to admire the South Carolinian’s rigorous logic. In recent years, Calhoun has been a much-maligned figure. Bassani, however, views Calhoun’s A Disquisition on Government as “one of the few great works of Western thought overcoming the main political currents of the last centuries” (i.e., “the European idea of the state and its compulsive notion of sovereignty”) (p. 255). With Calhoun, Bassani focuses on the theory of the concurrent majority and “the concept of the federal compact as founded on an agreement between the States” (p. 194).

Many scholars have accused Calhoun of being a proto-Marxist based on his view of the conflict between interests and the necessity of “dividing and distributing the powers of government” to “give each division or interest . . . either a concurrent voice in making and executing laws, or a veto on their execution” (John C. Calhoun. [1851] 1992. A Disquisition on Government. In Union and Liberty: The Political Philosophy of John C. Calhoun, edited by Ross M. Lence. Indianapolis, Ind.: Liberty Fund, 21). Bassani points out that Calhoun did not see conflict inherent between industrial and agricultural interests. Nor did Calhoun blame the market for inequalities between groups. The conflict Calhoun sought to address was one that could only arise “when the government abandoned its neutrality and became a tool” of one faction (p. 205). With the “American System” of high tariffs, national banking, and federal subsidies for internal improvements, Calhoun believed that the general government had become a tool of industrial interests and he sought a mechanism to protect minority interests.

With his emphasis on the compact theory of the Constitution, Calhoun showed that as an agreement among the people of the several states, the Constitution could only be modified by the amendment process. It was not, in Bassani’s words, “a sort of higher law open to any form of evolution according [to] the spirit of the times, the majority, the political classes in power, or the preferences of the justices of the Supreme Court” (pp. 197–98). Although an advocate of strict constitutional construction, Calhoun knew it was no panacea to correct trends toward centralization. At best, interpretative tools “are equivalent to an appeal by the minority to a sense of justice and moderation on the majority”—a lesson that modern-day originalists should remember (p. 208).

In less than two decades after Calhoun’s death, the European concept of the state conquered America when Lee surrendered to Grant at Appomattox. “Whether consciously or not,” writes Bassani, “the politicians who won the Civil War (and Abraham Lincoln in particular) laid out the premises for transforming America into a second, strengthened Europe” (p. 2). But we should not see Lincoln as merely a successor to Alexander Hamilton in desiring a more energetic general government. Chaining Down Leviathan argues that Lincoln’s “idea of the Union as an end in itself turned out to be the ideal Trojan Horse for bringing the conceptual framework of European statehood onto American soil” (p. 275). Without the Union becoming an idol to be worshipped, the state would have had a more difficult time taking root. Whereas the Founders’ Constitution evinced a distrust in centralized power, Lincoln’s Constitution preached a commonality of interests between the individual and the central state. Our modern governmental structure is the result.

In explaining the genesis of the European state on American soil, Bassani envisions Chaining Down Leviathan as a prequel to Robert Higgs’ Crisis and Leviathan, which begins its history of government’s growth with the 1890s. Bassani is a great admirer of Higgs’ work, but believes it impossible to understand the power grab chronicled by Higgs without an appreciation for the rise of the state in America. Absent the wounds inflicted on American federalism by Lincoln and the Republicans, the episodes in the growth of government described by Higgs could not have taken place.

Chaining Down Leviathan is a solid study of the golden age of American federalism Bassani shows what truly gave rise to American exceptionalism and why today we are just another European state—albeit larger and better armed. For anyone interested in the evolution of the state in America or the antebellum experiment with divided sovereignty, Chaining Down Leviathan is recommended.