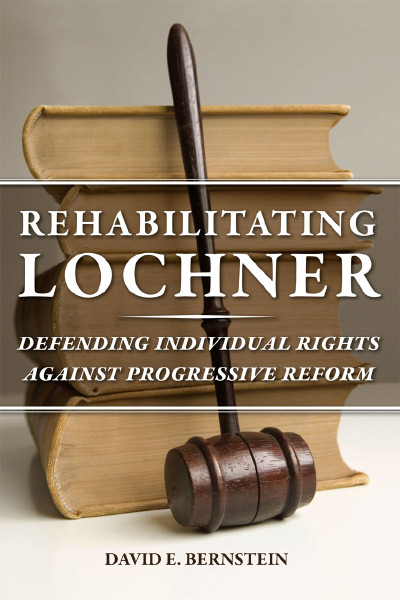 Few Supreme Court cases receive more scorn in U.S. law schools than Lochner v. New York (198 U.S. 45), the 1905 decision that struck down a New York law limiting the number of hours that bakers could work as a violation of the Fourteenth Amendment’s Due Process Clause. It’s safe to say that most legal academics and judges today believe that the Lochner Court engaged in extraordinarily outrageous “judicial activism” motivated by a devotion to extreme libertarian ideology, big business, or both.

In Rehabilitating Lochner: Defending Individual Rights Against Progressive Reform, George Mason University law professor David Bernstein makes the case that the conventional view is wrong. He provides persuasive evidence that Lochner does not deserve to be singled out as an especially activist or offensive case and that Lochner’s Progressive critics were the real activists with a much more disturbing agenda.

At the outset, Bernstein provides evidence that the Lochner Court didn’t invent the liberty-of-contract doctrine and didn’t stretch very far beyond existing case law. From the 1830s on, numerous state high courts had concluded that the “due process” provisions in their respective states’ constitutions offered broad protections of liberty, including economic liberty. In 1884, Bernstein points out, the U.S. Supreme Court acknowledged that due-process clauses were “bulwarks against arbitrary legislation,” protecting not only “particular forms of procedure, but the very substance of individual rights to life, liberty, and property” (pp. 13–14). Other late-nineteenth century opinions strongly suggested that the Due Process Clause protects certain fundamental liberties, including the right to contract.

Bernstein next looks at Lochner itself, including interesting details on the facts of the case and the unsavory (if unsurprising) origins of the challenged maximum-hours law. Joseph Lochner, it turns out, was a German immigrant who operated a small bakery, so a decision in his favor was hardly a triumph for big business. The law’s supporters were large bakeries and unionized bakers, who of course did not want competition from people who were willing to work longer hours than they were.

Bernstein points out that it was not only the five justices in the majority who said that the Due Process Clause protected liberty of contract (p. 35); Justice John Marshall Harlan and the two justices who joined his dissenting opinion also acknowledged this point. They disagreed not over the right’s existence, but only over whether the legislation could still be upheld as a legitimate health law under the state’s police power. In other words, the disagreement was only about where to draw the line.

Only Justice Oliver Wendell Holmes rejected the liberty-of-contract idea entirely, arguing in his dissenting opinion that the word liberty is perverted whenever it is “held to prevent the natural outcome of a dominant opinion.” As Bernstein points out, Holmes’s view, unlike Harlan’s, was well outside the legal mainstream of the time (p. 37). Nonetheless, Holmes’s opinion is the one that is better known and more celebrated today.

Holmes’s dissent also included his famous line that the “Fourteenth Amendment does not enact Mr. Herbert Spencer’s Social Statics.” But, as Bernstein shows, Holmes was attacking a straw man. No one on the Supreme Court subscribed to anything close to Spencer’s libertarian ideology. In fact, the justices in the Lochner majority upheld numerous state laws that interfered with the liberty of contract, such as a law imposing maximum hours for miners.

Much of the remainder of the book contrasts Lochnerian views with Progressive views, many of which modern-day liberals and most everyone else would find abhorrent.

The third chapter discusses the rise of Progressive “sociological jurisprudence.” The Progressives believed that cases should be decided by looking at “social facts,” not by making formalistic deductions from the written law. But Bernstein shows that when the courts upheld liberty of contract, they often recognized “social facts”; those facts were simply ones that Progressives didn’t like. For example, in Coppage v. Kansas (236 U.S. 1 [1915]), the Court struck down a ban on “yellow dog” contracts and correctly pointed out that liberty of contract “is as essential to the laborer as to the capitalist, to the poor as to the rich; for the vast majority of persons have no other honest way to begin to acquire property, save by working for money.”

The Progressives explicitly attacked individualism and sought to repeal constitutional protections of individual liberty that they believed stood in the way of reform. Learned Hand and Felix Frankfurter, we learn, even wrote unsigned editorials for The New Republic icalling for repeal of the Due Process Clause in both the Fifth and the Fourteenth Amendments (p. 44).

Bernstein’s next chapter looks at the relationship between liberty of contract and the rights of women. In some courts, the liberty-of-contract doctrine was used to strike down laws that reduced women’s ability to compete in the workplace, including maximum-hour laws and minimum-wage laws that applied only to women. Bernstein presents the various arguments that Progressives, including future Supreme Court justice Louis Brandeis, made in support of these laws. It should come as no surprise that the Progressives’ arguments were rooted in both paternalistic sexism and economic fallacies, but readers nevertheless might find some of the specifics shocking.

Bernstein looks next at racial segregation. He easily refutes Cass Sunstein’s nonsensical claim that there was an “extremely close link” between the Court’s decision in Lochner and its decision in Plessy v. Ferguson (163 U.S. 537 [1896]), which upheld a law requiring racial segregation on trains. He shows that the Plessy segregation law was actually a racist Progressive and populist attack on private-property rights as well as an attack on big corporations that didn’t want segregation on their trains. On the other hand, in Buchanan v. Warley (245 U.S. 60 [1917]), the Court invoked the Due Process Clause’s protection of private-property rights and liberty of contract to strike down a Louisville, Kentucky, law that mandated racial segregation in housing.

The final two chapters of Bernstein’s book discuss how we got from the so-called Lochner era to where we are today. Bernstein shows how Progressives separated “civil liberties” from economic liberties, and then New Deal–era liberals advanced the former (to some extent) but not the latter. To protect certain personal “noneconomic” liberties, modern liberals eventually embraced the same “substantive due process” concept that the Progressives had attacked in Lochner. This view of the Due Process Clause was responsible for such cases as Griswold v. Connecticut (381 U.S. 479, upholding a married couple’s right to use contraceptives) in 1965 and Roe v. Wade (410 U.S. 113) in 1973. Roe, of course, was far more “activist” than Lochner. As Bernstein puts it, “[T]here was no firm American intellectual or legal tradition supporting the right to terminate pregnancy,” and “while the liberty of contract’s scope was limited by the states’ ability to exercise their police powers, Roe failed to recognize any meaningful limitation on the right to terminate pregnancy” (p. 117, paraphrasing John Hart Ely).

From all of this, Bernstein does not draw any normative conclusions; he doesn’t call for the courts to return to Lochner. Instead, he seeks only to set the record straight, which he hopes will “lead to a more nuanced, civil, and constructive debate about modern constitutional law” (p. 129). Nevertheless, his book, through its presentation of the facts, may lead some to reconsider some of their premises about liberty of contract and about who the good guys and bad guys are in American legal history.

One might question whether people living at the time the Fourteenth Amendment was adopted actually believed that “due process” included as much as the Lochner Court (or the Griswold or Roe Courts) said that it includes. One might also question whether it’s wise to entrust the protection of our liberties to federal courts. But these questions lie beyond the scope of Bernstein’s book.

Rehabilitating Lochner does what it sets out to do very well. It places Lochner in its historical context, telling us where it came from, what it actually did, who attacked it, and what those people believed. Though published by an academic press, the book is readable and should be accessible for any intelligent lay reader. At the same time, it should be informative and provocative to legal scholars. I highly recommend it to anyone interested in the topic.