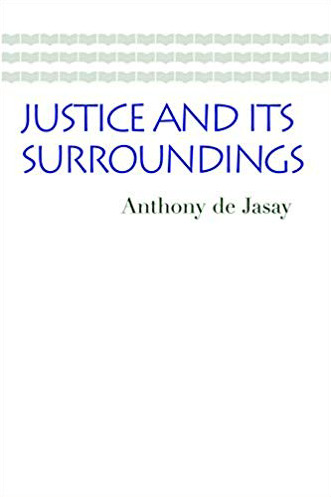 Justice and Its Surroundings
Anthony de Jasay
Paperback
This book review appeared in the Summer 2003 issue of The Independent Review.

Justice and Its Surroundings (the “surroundings” are concepts closely associated with justice and sometimes confused with it, such as equality or the state) is an unusually rich, provocative, and wide-ranging work, to which a short review cannot do, well, justice.

Admirers of the state argue that various goals can be achieved only via the coercive power of government. To meet such arguments, libertarians must show either that the goals in question are not worth pursuing, because they are undesirable or impossible (call this the “icky-goal response”), or that however worthwhile the goals may be, state power is not necessary for achieving them (call this the “needless-means response”).

In part 1, Anthony de Jasay offers a needless-means response to the claim that the state is necessary for the provision of social order. The problem of social order is commonly modeled as a prisoner’s dilemma: contribution to the maintenance of such order is collectively rational but individually irrational, so people cannot be expected to behave cooperatively unless compelled to do so by superior force. De Jasay grants (perhaps too quickly) that noncooperation is rational in a one-shot prisoner’s dilemma, but he insists that in real life we are more likely to have repeated interactions with the same people, so we have reason to cooperate in order to inspire like cooperation from them in the future.

To the claim that the state must provide public goods (that is, goods from whose enjoyment noncontributors cannot be excluded), de Jasay makes several rejoinders. First, public goods are not inherently public, but rather are made public by a “collective decision to avoid exclusion and its attendant costs” (p. 47). Second, the costs of exclusion are often lower than is commonly assumed. Third, public goods are generally “lumpy”—that is, the amount provided is not a continuous function of the amount contributed; in such cases the failure of a single contribution can have a drastic impact on the amount provided, thus weakening the incentive to free ride. And fourth, the benefits of public-goods provision must in any case be weighed against the principal-agent problems that beset state power.

In response to the claim that the state is a precondition of social order, de Jasay points out that, on the contrary, the rise and perpetuation of the state presuppose social order. Either a society, considered apart from the state, can afford to protect property rights by paying the relevant exclusion costs, or it cannot. If it can, the state is not needed. If it cannot, the society must lack the socioeconomic infrastructure needed to set up and maintain a state in the first place. Hence, in any given context, the state is either unnecessary or impossible.

De Jasay concludes that the problem with stateless social orders is not that they are inherently unworkable, but rather that “states stop them from emerging, and intrude upon them when they do emerge” (p. 15). It is difficult to know what moral the anarchists among us should draw from this conclusion. On the one hand, de Jasay brings us the cheery news that social order can be maintained without a state. On the other hand, he observes more gloomily that stateless social orders have not succeeded in holding their own against predatory states. Is protection against the state, then, one good that markets have trouble supplying? One would like to hear more from de Jasay about this apparent instance of market failure.

Against the “to each according to (blank)” approach to justice popular among redistributionists, de Jasay defends the more traditional conception “to each his own.” He is at his weakest, however, when advancing this position on moral grounds. Owing perhaps to his quaintly positivistic conviction that moral judgments are “neither true nor false” and so do not admit of “intersubjective validity” (p. 143), he has trouble taking seriously, and indeed has a tin ear for, the kinds of concerns that motivate egalitarian liberals. By contrast, he is at his strongest when showing that redistributionist proposals cannot achieve the goals their proponents claim to desire.

He argues, for example, that redistribution leads naturally to chronic unemployment. If employers are taxed to subsidize employees, the gain to employees will tend to be canceled by the shift in demand for labor entailed by the employers’ added costs; the employees can do no better than break even. If the subsidy instead takes the form of social insurance, those employees who would prefer money over social insurance will face a lower marginal benefit of labor. Hence, the supply of labor will shift by less than the demand for labor. Result: an increase in unemployment, which increases the demands placed on social insurance, occasioning higher taxes and yet another increase in unemployment, and so on.

The redistributionists’ claim that they are calling for equality only of opportunity, not of outcome, also falls under de Jasay’s scrutiny. There are, he observes, no opportunities so equal at time t 1 that people will not be shown to have made (whether by choice or by necessity) unequal use of them by time t 2. The opportunities that people have at t 2 will necessarily be, in part, a function of the use they made of the opportunities available to them at t 1, so if social justice requires equal opportunity not just once but in perpetuity, then the gains and losses that emerged from the equal opportunities of t 1will have to be undone to restore at t 2 the status quo ante of t 1. The distinction between equality of opportunity and equality of outcome thus collapses.

De Jasay targets not only redistributionists, but also antiredistributionists of the limited-government variety. For example, he considers an argument by Richard Wagner (the public-choice theorist, not the maestro of Bayreuth) that goes as follows: under majoritarian democracy, groups A and B have an incentive to vote for taxing away the earnings of C; groups B and C then have an incentive to form a new coalition against A, and so on in an endless cycle of forced transfers. Wagner’s recommended solution is a constitutional limitation on redistributive taxation.

De Jasay is critical of both the diagnosis and the cure. With regard to the diagnosis, he argues that the process of redistribution is unlikely to be cyclical in this manner: under the assumptions of rational choice, it will always pay more for the poor and middle class to gang up against the rich than vice versa. Hence, we should expect to see, and as a matter of empirical fact do see, a stable tendency for redistribution to flow downward rather than upward.

We may wonder whether de Jasay has captured the whole story here, however. Existing welfare states are not pure majoritarian democracies; instead, they are governed by representatives with incentives of their own. Because affluent interests are more concentrated and in a better position to lobby, we would expect to see much upward redistribution. And indeed we do, in such forms as corporate welfare, central-bank inflation, and subsidies for higher education.

In part 5, de Jasay examines Amartya Sen’s argument that the Pareto criterion (licensing any transfers that make nobody worse off by his own lights) clashes with libertarian values because it allows the voluntary transfer of liberties that are properly inalienable. De Jasay comes down on the side of Pareto, arguing that the (epistemologically grounded) presumption of liberty extends to the liberty to give up one’s liberties. I found this section less persuasive. For inalienability theorists, the question is not whether one should be allowed to surrender certain liberties, but whether one even can. (De Jasay’s conception of a liberty is also unclear. If liberties are mere moral permissions, how can X’s giving up a liberty be sufficient to generate a right in Y, as de Jasay claims? If liberties are something stronger, how can de Jasay’s distinction between liberties and rights be maintained?)

Of necessity, my summary has passed over much valuable material in Justice and Its Surroundings (including a devastating critique of market socialism). Anyone with interests in philosophy, economics, political theory, or rational-choice analysis will profit from close reading and long pondering of de Jasay’s arguments.