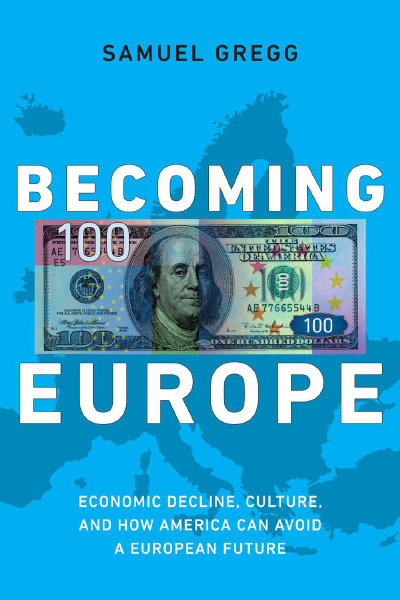 Becoming Europe
Economic Decline, Culture, and How America Can Avoid a European Future
Samuel Gregg
Kindle Hardcover
This book review appeared in the Winter 2013/14 issue of The Independent Review.

If America were like western Europe, subscribers to the Independent Review might be advised to request that it be discreetly delivered to their post office boxes in a brown-paper wrapper. The ideas that Review subscribers cherish—economic freedom, small government, individual responsibility—are increasingly anathema in Europe. As Samuel Gregg explains it, the language and ideals of “solidarity” and “social justice” so permeate public discourse in Europe that “even minor attempts to reform its social welfare programs, let alone reduce the welfare state’s size, are regarded by many Europeans as a heartless assault on the weak and marginalized, and a betrayal of the commitments widely associated with Social Europe” (p. 12).

To suggest that this decaying system is unsustainable invites ostracism. But the system is in decay, and Gregg’s purposes are to explain how Europe entered this cul-de-sac, to warn that the United States is in danger of following it, and to explain how we can avoid this fate.

The facts that Gregg enumerates are sobering. European economic growth has slowed to a crawl. European Central Bank figures show that the average annual rate of economic growth in the Eurozone countries decelerated from 3.4 percent in the 1970s to 2.4 percent in the 1980s, 2.2 percent in the 1990s, and 1.1 percent from 2001 to 2009—in an era when economic growth burst forth across the rest of the world. It’s not that many Europeans really need the extra money to buy life’s necessities; rather, the problem is that this lack of economic growth is a symptom of deeper problems—the lack of incentives for businesses and entrepreneurs in Europe to innovate, the bloated costs imposed on them by the heavy hand of social regulations, and, most important, their inability to create jobs for the next generation. This disappearance of opportunities for younger people has caused youth unemployment rates to soar, averaging almost 25 percent throughout the European Union and surpassing 50 percent in Spain and Greece. As a consequence, many young people never have the chance to do meaningful work, to flourish, and simply to grow up and do adult things, such as starting a family.

Gregg argues that the root cause of this stagnation lies in Europe’s economic culture, which is responsible for the suffocating institutions Europeans have created. He accordingly takes a deeply historical approach, carefully delineating the tension between Europe’s “guild culture” and its “market culture” from medieval times to the present. He argues that the bitter experience of World War II explains much of Europe’s current troubles. The war’s aftermath saw a yearning for security and a sense that shared sacrifices entitled everyone to economic protection. The sheer magnitude of the war’s destruction made significant extensions of government economic intervention virtually impossible to oppose, especially in light of the industrializing success of the Soviet Union. The populace simply couldn’t wait for the market to gradually resolve Europe’s postwar shortages. Top-down economic management was the result, and neocorporatist institutions, which gave the state and worker councils important roles in governing businesses, became the norm. The approach served Europe well enough during its postwar catch-up growth phase, but it also fueled a dynamic whereby the welfare state grew progressively larger. Every election cycle brought calls to expand the welfare state in the name of inclusion and social solidarity—to argue otherwise invited being branded as an enemy of one’s needy and helpless neighbors. But the costs of these programs, like the definition of needy, ballooned so that the state’s share has reached nearly half of gross domestic product (GDP) across western Europe. The American Left tends to see Europe as the natural benchmark, but this situation is very unusual by world standards. AWorld Bank study cited by Gregg calculates that Europe accounts for “an astonishing 58 percent of the entire world economy’s spending on social protection” (p. 159), such as government-provided pensions and medical care.

For all the good intentions, these costs are now crushing Europe. But not all these intentions are so noble. Ultimately, Gregg demonstrates, Europe’s vaunted social solidarity is a masquerade. The driving force has become rent seeking. Most social expenditures don’t go to the weak and marginalized. They go to civil “servants” and to insiders from the older generation who block sensible attempts to, say, increase the retirement age past age sixty or sixty-two. Solidarity breaks down as voters rudely “ask” their productive, hard-working neighbors to “give” a bit more, a bit more, and a bit more. Despite high taxes, European nations’ debt-to-GDP ratios have soared due to demographic forces. The average fertility rate of European women is now well below the replacement rate—averaging about 1.5 children per woman. This means that Europe is aging and shrinking. There aren’t enough workers to support each pensioner, and “fewer people means a smaller pool of human creativity, risk-takers, and potential entrepreneurs, and[,] as the population ages, fewer people working and creating wealth” (p. 179). Ironically, the social welfare systemthat promised cradle-to-grave protections is digging its own grave by emptying the cradle—Gregg reports considerable empirical evidence that countries with large pension systems have lower fertility rates. The logic is compelling. Why should adults go to the trouble of raising their own children if someone else’s children can pay for their early retirement? And when adults exclude themselves from the joys and challenges of parenthood, they are less likely to learn the virtues of self-sacrifice and even more likely to become self-absorbed free riders.

Gregg’s portrait of Europe is sobering, but there are clear signs that America is headed down the same road. How to avoid this fate? Policies must change. But before this can happen, Gregg convincingly argues, Europeans and Americans need a change of attitude. Most importantly, we need to debunk claims that the European approach constitutes the moral high ground. It doesn’t. Libertarians and conservatives must constantly challenge the idea that the difference between them and “liberals” is about whether people ought to help those in need. That’s not the issue. As the Wall Street Journal’s William McGurn puts it, the issue is how: How do we “balance our care for fellow citizens without wrecking the economy, ruining families, or giving birth to more soulless bureaucracies?” (quoted on p. 275). Gregg, who is director of research at the Acton Institute for the Study ofReligion and Liberty, draws on the ideas of thinkers from Alexis de Tocqueville to John Paul II in stressing that we must argue with tact, passion, generosity, and persistence the moral case for wealth creation over forced wealth redistribution. We must relentlessly explain that free will means free choice means personal responsibility—and that only freedom and personal responsibility bring human flourishing. We must demonstrate that it is the Left that’s mired in materialism. We must do more than merely engage in policy battles; we must nurture our economic culture and win hearts as well as minds. The odds seem stacked against us—you and me. But this is why organizations such as the Independent Institute exist—and why the Independent Review doesn’t arrive in a brown-paper wrapper