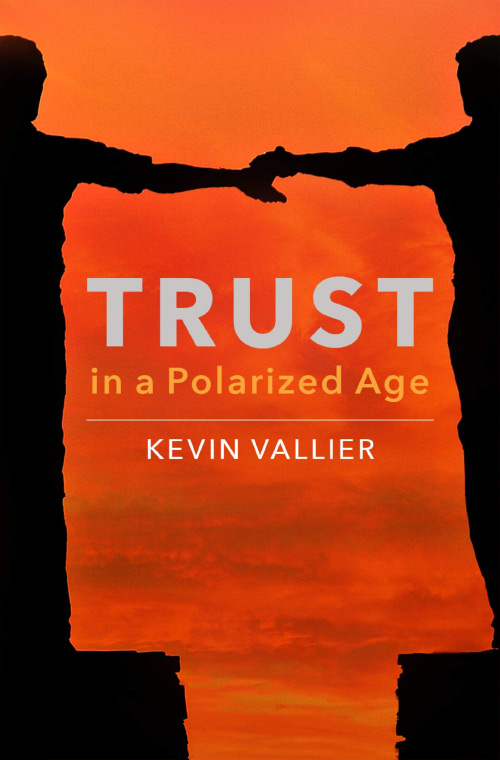 Trust in a Polarized Age
By Kevin Vallier
Kindle Hardcover Audiobook Audio CD
This book review is a web exclusive for the Fall 2021 issue of The Independent Review.

In a world rife with partisan controversy, many commentators of American politics appear to agree on one thing: the extremity of democratic disagreement. To the extent that Americans are shocked by each other’s emotionally tinged and partisan perspectives, it may be because we have been deluded by Enlightenment and nineteenth century liberal visions of human nature that overestimated our capacity for rational deliberation, as argued by Christopher H. Achen and Larry M. Bartels (2016. Democracy for Realists: Why Elections do not Produce Responsive Government. Princeton, N.J.: Princeton University Press, pp. 2, 230, 328). Now that a sitting president responded to his loss with falsehoods of electoral fraud, culminating in a riot that sought to impede the Congressional certification of the votes, the peace-preserving resilience of liberal institutions appears more precarious than ever.

Kevin Vallier argues politics need not be warlike because liberal rights practices and institutions facilitate trust because they can be publicly justified, that is to say, able to be rationally agreed upon by all people and groups for their own moral reasons, rather than be reliant on “propaganda, manipulation, and threats” (p. 15). By “political war,” Vallier refers to “a condition in which a society has low levels of social and political trust but is not in an open civil war” (p. 20). Vallier casts Trust in a Polarized Age as a sequel that builds on his primarily philosophical argument in 2019’s Must Politics Be War? by using empirical literature to show how liberal institutions create trust and attending to “the practical challenges” of transcending political war (p. 16).

Worried that we are caught in a feedback loop between declining social trust and increasing political polarization, Vallier defends liberal institutions as essential, if not necessarily sufficient, resources that encourage and maintain social trust among people of diverse perspectives and backgrounds. Vallier rebuts thinkers like Patrick Deneen and Chantal Mouffe, who, despite their major differences, advance “inherent-corruption” theories that blame our warlike politics on the nature of liberal democracy (pp. 10–11). Vallier persuasively shows that the problem with these theories is that the United States is unique among similarly wealthy liberal democratic countries in terms of its low levels of social trust and high levels of political divergence (p. 279). Indeed, a major strength of Vallier’s approach is his emphasis on institutional factors that shape the character of our political culture and social norms, which offers more explanatory power than group theory accounts like Achen and Bartels’s, which focus largely on the cognitive shortcomings of individuals; after all, if human beings tend toward partiality, that is not unique to Americans. Taking a global survey of the empirical literature, Vallier suggests that likely culprits behind low social trust seem to be ethnic segregation (p. 60), political and legal corruption (pp. 61-62), communism (specifically secret police and unfair trials) (p. 64), and to a lesser extent, cultural and psychological factors (pp. 64-66).

Throughout the book Vallier deftly weaves empirical evidence showing how various liberal rights practices encourage and maintain social and political trust into clear and convincing accounts of how the same practices can be justified to people committed to a wide variety of political and moral values, including nonliberal commitments. For example, Vallier uses three in-depth chapters on the market economy, welfare state, and arguments against egalitarianism to defend modest welfare state capitalism as a political economic regime capable of encouraging trust while appealing to more diverse members of the public than the alternatives, including the property-owning democracy favored by John Rawls (p. 186). While he argues modest welfare state capitalism is currently the system most capable of being justified to diverse people at this time, he acknowledges those who consider it “suboptimal,” such as libertarians or socialists, will continue to use reason and persuasion to agitate for change, as is within their rights (pp. 207–208). He writes with empathy and nuance regarding people likely to bristle at some of his arguments, writing that even if “sincere, informed people of goodwill” are mistaken in believing Marxist arguments regarding the inherently coercive nature of capitalism, policies to combat workplace coercion can be publicly justified within welfare state capitalism (pp. 136, 197).

To fulfill his goals of moving from philosophical reasoning to addressing the practical challenging of resolving American political war, Vallier develops a theory of “process democracy,” which he defines as a defense of democracy that emphasizes institutions that center “participation and political equality” in electoral and deliberative processes (p. 271). In response to Achen and Bartels’ challenge that representative democracy is not responsive to citizens, contradicting normative arguments for democracy that assume it can realize a popular will, Vallier defends electoral rights based on their procedural fairness and their tendency to result in publicly justified policymaking. Vallier redefines democratic representation in a manner that necessitates representatives’ decisions to map onto the range of policies that could be “publicly justified for their constituents” (p. 254). Still, Vallier recognizes the mismatch that can occur between the “moderately idealized” citizens he imagines throughout his book and actual citizens; he recommends adding minipublics and prediction markets to our deliberative environment to better “uncover the reasons of citizens” that can guide policymaking (p. 255). He also suggests changes to our voting system such as ranked-choice voting and proportional representation (pp. 270–271). Vallier relies on a refreshingly nuanced understanding of rationality, acknowledging that just because we are influenced by nonrational factors like partisan identity, a claim central to Achen and Bartels’s critique of mainstream democratic theory, that does not inherently “undermine the rationality of our beliefs” (p. 259). As Vallier notes, political issues are often so complicated that it is reasonable for voters to rely on heuristics (p. 261).

How do we pursue the political reforms that will strengthen the liberal institutions so crucial to maintaining social trust? Vallier gives three directives: “fight our own distrust” of those with whom we disagree by adopting intellectual humility, allow the polite respect we show each other in grocery store aisles to carry us across the political aisle, so to speak, and to think globally, remembering that the superior levels of trust and political polarization in other developed liberal democracies suggests “our condition is not terminal” (pp. 278–279).

While Vallier’s reliance on studies of global data helps him dismiss claims that liberal democracy is inherently conflict-ridden, it leaves the underlying causes of Vallier’s central puzzle, the low levels of trust and high levels of polarization in the United States specifically, somewhat vague. Admittedly, Vallier acknowledges that the southern realignment of the parties during the civil rights movement and economic inequality could be direct causes of party divergence from the last half of the twentieth century to today. However, he ultimately defends his focus on trust because he considers it an important intervening variable that facilitates divergence by “amplifying” the effects of “realignment and inequality” (p. 13).

Ironically, a global perspective can still help us grapple more directly with the underlying racial politics and inequality that affect the trust-polarization feedback loop with which Vallier is concerned. Political scientists have combined a comparative approach with studies of American political development to better understand American history as a long, dynamic process of democratization and democratic backsliding (see 2009. Democratization in America: A Comparative-Historical Analysis, edited by Desmond King, Robert C. Lieberman, Gretchen Ritter, and Laurence Whitehead. Baltimore: Johns Hopkins University Press; Robert Mickey. 2015. Paths Out of Dixie: The Democratization of Authoritarian Enclaves in America's Deep South, 1944-1972. Princeton, N.J.: Princeton University Press; Robert C. Lieberman, Suzanne Mettler, Thomas B. Pepinsky, Kenneth M. Roberts, and Richard Valelly. 2019. “The Trump Presidency and American Democracy: A Historical and Comparative Analysis,” Perspectives on Politics 17 [June]: 470-479). As Francisco E. Gonzalez and Desmond King (2004. “The State and Democratization: The United States in Comparative Perspective.” British Journal of Political Science 34 [April]: 193-210, p. 195) put it, “democratization is a continuous process of reforms and modifications of the institutions and practice in a given political regime, from fewer to more degrees of free and fair contestation and participation.” Gonzalez and King note that the passage of the Civil Rights and Voting Acts in the mid-1960s transformed the United States from a “restricted democracy” to a “full liberal democracy.”

If the dynamics of American democratization and democratic backsliding relating to America’s history of racial and socioeconomic oppression significantly contribute to the trust-polarization feedback loop with which Vallier is concerned, then it remains an open question how public reason liberalism helps us grapple with those fundamental problems. Archival evidence examined by Brandon Terry (2021. “Conscription and the Color Line: Rawls, Race and Vietnam,” Modern Intellectual History: 1–24, pp. 19–20) shows how Rawls applied his ideal theory to the nonideal reality of racial exploitation in formulating his criticism of the Vietnam War draft. Although Vallier describes his approach as a nonideal social contract theory, I think Terry’s concerns regarding Rawls’s philosophical approach might apply to Vallier’s Trust as well: by understanding the chief practical goal of political philosophy to be uncovering and defending the rational agreement that underlies fundamental political and social structures, the philosopher risks unintentionally upholding injustice by forgoing the transformative potential of disagreement, especially if she finds herself in the midst of a major political crisis. Further systematic exploration of the root causes of American levels of trust and political polarization may be necessary to strengthen and improve upon the institutions that Vallier defends. In other words, is the “condition” that needs to be cured the combination of low social trust and high polarization, or are these two related symptoms of another underlying pathology? And if they are merely symptoms, how does using public reason to buttress social trust and transcend partisanship treat the deeper disease?

Despite these concerns, Trust in a Polarized Age is a comprehensive and important contribution to public reason liberalism and the current debates over the status of American democracy. It enables readers of various intellectual and political backgrounds to reflect seriously on the relationship between trust and liberal democratic institutions that many take for granted. Trust in a Polarized Age exemplifies the value of being willing and able to engage with those across the political spectrum if we seek to fortify liberal democratic institutions.