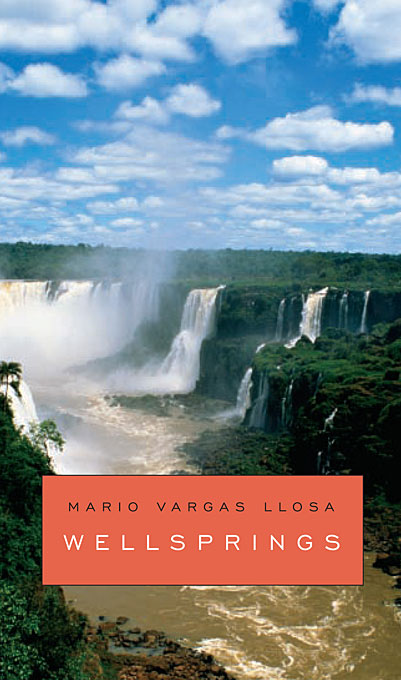 Mario Vargas Llosa, one of the world’s greatest living writers, is also well known, especially in Spain and Latin America, as a great defender of the ideals of a free society. In the Spanish-speaking world, he is therefore more than a great writer; he is also a public intellectual in the real sense of that much abused expression, and his regularly aired opinions on political events (as well as on literature, culture, and the arts) are a fixture of the intellectual life of these regions. His writing is always intelligent and urbane. Moreover, it is always informed by a definite classical-liberal point of view. Indeed, he may well be the most prominent expositor of this point of view in the Spanish language today.

The first three chapters of Wellsprings constitute the author’s “Richard Ellmann Lectures in Modern Literature,” delivered at Emory University in 2006. These lectures deal with “three masters” of Spanish letters: Miguel de Cervantes, Jorge Luis Borges, and José Ortega y Gasset. The chapters on Cervantes and Borges, perhaps predictably, deal with literary matters for the most part, but in the chapter on Ortega the stress is on political thought. Here Vargas Llosa adds what, to many, might seem an unexpected twist: he argues that this presently much-neglected Spanish philosopher should be regarded as a key figure in the development of the liberal tradition. To be sure, Ortega was not much interested in economic matters, and this omission was a shortcoming in his approach to social problems, but Vargas Llosa himself has often pointed out that classical liberalism includes much more than free-market economics:

Contemporary liberal thought has much to learn from the ideas of Ortega y Gasset. Above all, to rediscover that—contrary to what those people bent on reducing liberalism to an economic recipe for free markets, low tariffs, controlled government spending and the privatization of business, suppose—liberalism is, above all, an attitude toward life and society based on tolerance and coexistence, on respect for the rich history and unique experiences of different cultures, and on a firm defense of liberty. . . . Economic freedom is a key element of the liberal doctrine, but certainly not the only one. We of course regret that many liberals of Ortega’s generation were unaware of it. However, it is a no less serious mistake to reduce liberalism to an economic policy of free markets functioning with a minimum of government interference. . . . Liberal doctrine is a culture in the broadest sense of the word, and Ortega y Gasset’s essays reflect this in a stimulating, cogent manner on every page. (pp. 68–69)

In addition to the Ellmann Lectures, Wellsprings includes four other chapters, which offer ruminations on nationalism, discussions of aspects of Latin American history, and (the last two chapters) commentaries on the writings of two thinkers who, according to Vargas Llosa, have had a profound and decisive influence on his own approach to politics: Isaiah Berlin and Karl Popper.

This volume thus offers to the English-speaking public a distillation of Vargas Llosa’s mature thought on political and social issues. The stress in the previous sentence should be on mature because, given his current prominence as a spokesman for classical liberalism, it is easily forgotten that as a young writer he was a typical “man of the left.” Indeed, like most intellectuals coming of age in the 1950s and early 1960s, he was closely identified with left-wing causes, and he greatly admired the Cuban Revolution. This stance was in part owing to the prevailing climate of opinion among intellectuals at the time, especially in France, where he spent his formative years as a struggling young writer. Another factor was a personality that has always exhibited a strong antiauthoritarian streak, along with the fact that authoritarianism in Latin America had historically long been associated with right-wing regimes. He eventually became convinced, however, that armed revolution was not a real option for improving social conditions in Latin America and that gradual reform within a functioning democratic polity was the only way to achieve social justice. He consequently became increasingly interested in the preconditions for a well-functioning democratic society.

In his narrative work, the shift in his political and social thought was expressed most forcefully in two major novels of the early 1980s: The War of the End of the World (La guerra del fin del mundo, 1981) and The Real Life of Alejandro Mayta (Historia de Mayta, 1984). These novels deal, each in a distinctive way, with the myopia that renders ideological adversaries incapable of understanding their opponents’ viewpoints. As Vargas Llosa himself later explained (in commenting on Mayta), he came to realize that all ideologies are fictions and that instead of providing solutions, they make the problems even worse:

Many young people, many intellectuals, many avant-garde politicians were using ideology, were using these political ideas that presumed to describe reality . . . and were, in fact, adding to reality a purely imaginary world. It seemed to me strange that this fiction . . . was a major source of violence and brutality in Latin America; that these sometimes elaborate and complex ideological constructions in which one society was described and then another ideal society was also described as a goal to be reached through revolution . . . were, in fact, a mechanism that was destroying our societies and creating major obstacles to real progress. (A Writer’s Reality [Syracuse, N.Y.: Syracuse University Press, 1991], pp. 149–50)

Vargas Llosa attributes much of his change in outlook to the influence of Isaiah Berlin and Karl Popper, both of whom he began to read and study in earnest in the late 1970s and early 1980s. As mentioned previously, he devotes two of the longest chapters in Wellsprings to discussion of these philosophers and their impact on his own thought. One of the things he most admires about Berlin is his skepticism regarding claims to final solutions of the world’s woes:

A constant in Western thought is the belief that one true answer exists for every human problem, and that once we find this answer, then all others must be rejected as mistaken. A complementary idea, as old as this one, is that most noble and inspiring ideas—justice, freedom, peace, pleasure, and so on—are compatible with one another. For Isaiah Berlin, these two beliefs are false, and many of the tragedies that have befallen humanity can be laid at their doorstep. From this skeptical base, Berlin produced a number of powerful and original arguments in favor of freedom of choice and ideological pluralism. (p. 139)

The chapter on Popper opens with a strong statement: “Truth, for Karl Popper, is not discovered: it is invented” (p. 160). Even allowing for “poetic license,” this assertion seems an extreme formulation of what is, in fact, a complex and nuanced theory, although Vargas Llosa makes his case with his customary elegance. What this essay says about Popper, however, is not really as interesting as what it says about Vargas Llosa himself. The Popperian emphasis on falsifiability, criticism, and provisional (but never unconditional) acceptance of scientific hypotheses clearly had an impact on Vargas Llosa’s own understanding of the world: “Popper’s theory of knowledge is the best philosophical justification for the ethical value that most characterizes democratic culture: tolerance. If there are no absolute and eternal truths, if the only way for knowledge to progress is by making and correcting mistakes, we should all recognize that our own truths may not be right and that what looks to us like our adversaries’ errors may in fact be correct” (pp. 165–66).

Thus, both Berlinean pluralism and Popperian uncertainty serve as antidotes to dogmatism and fanaticism, the great enemies of liberty in Vargas Llosa’s worldview. These essays offer insightful and lively commentary on two important liberal thinkers written by a master of modern prose. In this collection of writings by a novelist, however, the strongest case for liberty as a value in its own right fittingly comes not from a philosopher, but from another novelist: “Freedom, Sancho, is one of the most precious gifts bestowed by heaven on man; no treasures that the earth contains and the sea conceals can compare with it; for freedom, as for honor, men can and should risk their lives and, in contrast, captivity is the worst evil that can befall them” (Miguel de Cervantes, Don Quixote (1605, 1615), qtd. on pp. 23–24).

It is good to know that the liberal tradition in Spanish letters—a tradition as old as Cervantes—is still alive and well.