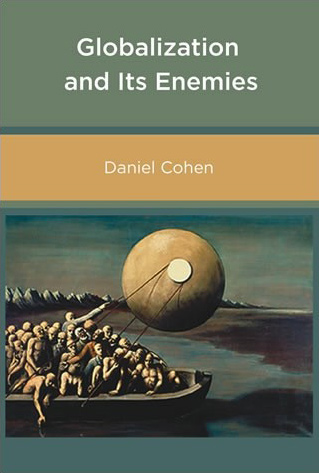 Globalization and Its Enemies
By Daniel Cohen
Hardcover Paperback
This book review appeared in the Summer 2008 issue of The Independent Review.

In Globalization and Its Enemies, Daniel Cohen deals with an important and timely topic, but he does so inadequately. The title leads one to believe that Cohen will defend globalization against its enemies or identify those enemies and describe their arguments. However, the book provides, at best, a weak defense of global capitalism, and it does not clearly identify globalization’s enemies and their agenda. The book is perhaps strongest when the author puts the current wave of globalization into historical context. The book is at its weakest when the he tries to describe why poor nations have failed to develop and what can be done to make globalization work better. These two topics fill most of the book, making brevity (169 pages) perhaps its greatest merit.

Cohen begins by drawing heavily on Jared Diamond’s book Guns, Germs, and Steel (New York: Norton, 1997) to explain the birth of the “North-South Axis,” which he describes as the first wave of globalization. He then moves on to what he calls the second wave of globalization in the nineteenth century. Backed by statistical data on the volume and pattern of trade, he makes the reasonable case that globalization is nothing new, that it has always been a part of human development, and that in many ways the nineteenth-century world economy was even more globalized than today’s.

In describing development in today’s globalized economy, Cohen draws on Amartya Sen’s notion that development consists in giving people the ability to build futures worthy of their expectations (Development as Freedom [New York: Anchor, 2000]). According to Cohen, those who oppose globalization “find themselves clinging to the idea that globalization imposes a model that people do not want. The truth, however, is probably the reverse. Globalization shows people a world that subverts their expectations; the drama lies in the fact that this revelation is incapable of satisfying them” (p. 5). Modern globalization’s unique aspect, he argues, is that the speed of technological change has given the world’s poor the ability to see that the West has prospered faster than they have. “The central issue regarding globalization is not that it develops too quickly or that its effects are too brutal. On the relatively short time scale of capitalism, what is striking is its poor capacity to diffuse technical progress rather than its propensity to impose progress everywhere” (p. 22). However, as the people of Taiwan, Hong Kong, Singapore, South Korea, and other countries can attest, capitalism has succeeded in increasing living standards rapidly where it has been embraced. Cohen seems to conflate globalization and trade with fully embracing capitalism.

One of the book’s greatest weaknesses is its lack of any meaningful discussion of the institutions of property rights, rule of law, and economic freedom, and of the role they play in transmitting globalization’s beneficial effects. In fact, these types of governance institutions are mentioned only indirectly and then quickly brushed aside when India’s lack of development in the nineteenth century is examined. During the first half of that century, India was privately managed by the East India Company; hence, “among economists who attribute the Third World’s problems to bad ‘governance,’ this is a formidable real life test of the effects of private administration on the wealth of a country” (p. 29). Cohen presents no evidence, however, that the East India Company provided free-market institutions to India. In fact, he cites evidence to the contrary one page later, when he notes that the “East India Company prohibited Indian textile firms from competing with English textile manufacturers in British territory” (p. 30). How then does he explain India’s poor performance? Although he draws on Arghiri Emmanuel’s work (Unequal Exchange [New York: Monthly Review Press, 1972]) and seems to defend globalization against the charge of exploitation, he concludes that both labor and capital are responsible for India’s failure to develop (p.41). He claims that according to a foreman in India, “they could work more, but they refuse to do it. Unless they are paid more!” (p. 41, emphasis in original), and he mentions a 1928 strike in opposition to an increase in the pace of work. Why did English workers earn more than Indian workers? “[T]heir tolerance of a faster work pace was more accountable for this difference. Indian workers were not passively exploited; they refused to be exploited. Neither did they reject capitalism. They waited for higher wages. Why were Indian capitalists incapable of making this simple a priori discovery themselves, to know that human work cannot be made productive without consideration for what people say of these aspirations? Foreign experts were numerous and that was precisely the problem” (p. 42). Cohen apparently would have us believe that underdevelopment exists in India and elsewhere because thousands of businesses fail to realize that it would be profitable to pay a form of “efficiency wages.”

Cohen’s analysis, for the most part, becomes worse as the book goes on. In describing modern globalization (chapter 3), he makes convoluted arguments that economies of scale, not natural differences, drive essentially all of international trade, which somehow undermines Ricardo’s argument. Although discussion of this matter is largely incoherent, his conclusion that “a country cannot hope to prosper solely on the basis of the international division of labor” (p. 76) is sound. He fails, however, to identify the institutions needed. His fundamental lack of appreciation of property rights, the rule of law, and economic freedom reappears in chapters 4 and 5. In the former, he does a reasonably good job of dispelling the notion that different religions hold back growth. The growth of Ireland, a Catholic country, is one of his examples, yet he makes no mention that this rapid growth occurred when the Irish dramatically increased economic freedom. In chapter 5, he similarly discusses the Japanese model: “Industrialization under the aegis of different development banks was carried out at once by different subsidies, such as government tax breaks and subsidized loans. . . . [T]he firms receiving government aid were always part of a measurable objective, most often in matters of exports. If an enterprise failed to meet its targets, it was immediately stripped of its credits” (p. 103). None of the difficulties of industrial planning nor any of the Ministry of International Trade and Industry’s numerous failures is mentioned. Moreover, Cohen does not mention that during Japan’s period of rapid growth, it had one of the world’s freest market economies, despite its industrial policies. (For more on this argument, see Benjamin Powell, “State Development Planning: Did it Create an East Asian Miracle?” Review of Austrian Economics 18, nos. 3–4 [December 2005]: 305–23).

Chapter 6 lives up to its title “The Empire, Etcetera” by presenting a discussion of empire, then following it with largely unrelated ramblings. The author does give readers a clue as to where he will eventually go, however, when he writes that the European Union “offers an institutional solution to the quest of a public good while falling short of a true democracy. This is exactly the problem to which the world at large needs to find a solution” (p. 142). Before we reach his solution, chapter 7, “AIDS and Debt,” takes on two tangential discussions. Surprisingly, AIDS is not one of them. It is mentioned briefly only on the first and last page of its subsection. Instead, Cohen offers many assertions about intellectual property rights in medicines, but provides no meaningful analysis. In the debt section, he asserts that cancellation is necessary. He points out that governments are eager to take on debt, and they do not worry about how their successors will pay it off. How will cancellation fit in? “Debt is a trap in the sense that it exempts governments that borrow from asking who will repay. . . . Debt cancellation, therefore, does not aggravate the problem. It resolves it. It obliges lenders to ask themselves the question that will come at the time of repayment” (p. 156). Cohen is apparently unaware that between 1989 and 1997, $33 billion of debt was forgiven to forty-one highly indebted poor countries and that in these same countries new borrowing thereafter totaled $41 billion. New borrowing was highest in the countries that received the most debt relief, and a statistically significant correlation exists between average debt relief as a percentage of GDP and net new borrowing as a percentage of GDP, as William Easterly explains in The Elusive Quest for Growth (Cambridge, Mass.: MIT Press, 2001). Cohen’s oversight is a rather strange one because he cites The Elusive Quest for Growth extensively in chapter 5.

In the last twelve pages of the book, Cohen finally deals with how globalization should be improved. He sees two great problems at hand. “The first is that there remain great worldwide public goods that are still not covered by an agency worthy of the name” (p. 158), and “[t]he second problem is that, even when an existing agency is responsible for a certain public good . . . such as the World Health Organization and the Internal [sic] Labor Organization, [the agency has] little authority” (p. 159). Cohen would resolve this “problem” by creating a “Council of Economic Security” in the United Nations that “could be called upon each time a conflict of standards interferes between agencies dependent on the United Nations system. The council, made up of sages with globally recognized moral authority, would be charged with resolving the problem” (p. 160, emphasis added). How these “sages” get their moral authority and the correct information that will allow them to be “sages” goes unannounced. Cohen also ignores the incentive problems that these planners might face.

Cohen writes, “Global capitalism is not simply capitalism. This is the whole problem” (p. 164). Indeed it is. He unfortunately would have us introduce even more noncapitalistic elements into the world, further undermining globalization’s beneficial effects. His book misses the idea that the absence of crucial market foundations— private-property rights, the rule of law, and economic freedom—prevents countries from prospering in the globalized economy. Instead of facing this problem, he would have us further hamper the market system with new institutions of world governance.