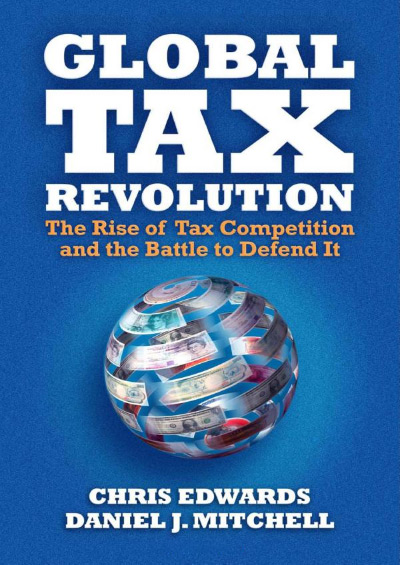 Global Tax Revolution
The Rise of Tax Competition and the Battle to Defend It
By Chris Edwards and Daniel J. Mitchell
Kindle Hardcover
This book review appeared in the Fall 2009 issue of The Independent Review.

The first sentence of Global Tax Revolution, “A fear is haunting big governments around the world—the fear of rising tax competition,” is, I assume, a take-off on the first sentence of The Communist Manifesto. Just as when Marx and Engels warned that “[a] spectre is haunting Europe—the spectre of Communism,” Chris Edwards and Daniel Mitchell intend their book as a warning: governments that resist tax competition by keeping their tax rates high will be overtaken by nations whose governments are lowering the rates to make their countries more competitive.

The book consists of ten chapters, each making a simple, straightforward point supported by copious data and case studies. Chapter 1 provides an overview, giving examples of tax competition and citing resistance by governments that want to preserve higher rates. Chapter 2 focuses in global capital flows, offering much empirical evidence on the growth in foreign investment worldwide and on the importance of national tax structures in directing those capital flows. More countries are becoming good places to do business, and international corporations invest all over the world. In response to capital that is increasingly mobile across national borders, countries have changed policies to make themselves more business-friendly, cutting taxes substantially.

Chapter 3 describes a worldwide tax-cut revolution as countries have reduced the rates of their income and capital-gains taxes. Twelve Organization of Economic Cooperation and Development (OECD) countries have capital-gains rates of zero. The authors document cuts in tax rates on corporate income, dividends, and wealth throughout the world, providing many illustrative graphs and charts. Chapter 4, titled “Flat Tax Club,” describes how nations are adopting a flat-rate income tax. The authors note, “By 2008, 25 jurisdictions had adopted single-rate individual income taxes,” and argue that these countries have prospered because they have done so.

In chapter 5, “Mobile Brains and Mobile Wealth,” Edwards and Mitchell describe how individuals, corporations, and capital are willing to move across borders in pursuit of lower tax burdens, giving examples of specific individuals and corporations who have moved to lower-taxing jurisdictions. The chapter is more anecdotal than the chapters that precede it, but the evidence is persuasive, at least in part because chapter 2 already demonstrated the substantial increases in international capital flows over the decades.

Chapter 6, “Taxing Business in the Global Economy,” pertains to the complexities of business taxation in a global economy. The authors go into the details of how tax liabilities are computed in theory and discuss how tax institutions actually vary from country to country. They present evidence that tax laws have a substantial influence on international capital flows and offer evidence of a corporate-tax “Laffer curve.” The revenue-maximizing rate surely lies below 35 percent, they argue; according to a study they cite, it is probably in the neighborhood of 26 percent. The evidence is interesting and persuasive, although not rigorous enough to be completely convincing. One would ideally want to account for many other factors that the authors leave out in their informal discussion.

For example, they do not emphasize that the revenue-maximizing tax rate is always larger than the “optimal” tax rate because at the peak of the Laffer curve the rate can be reduced slightly, resulting in a large reduction in the excess burden of the tax, but only a small reduction of tax revenue. The closest they come to this conclusion is their statement that “the goal of tax policy is not to fatten the government with added revenues, but to maximize U.S. economic growth. With that goal in mind, a much larger cut is in order” (p. 132). This point merits more emphasis because the revenue-maximizing rate is often misrepresented as “optimal” in some sense.

Chapter 7, “The Economics of Tax Competition,” builds on the idea that with mobile capital, nations compete for business by lowering tax rates to attract that capital. The authors consider two arguments that tax competition might be harmful: it can harm the private sector by driving resources from high-tax to low-tax countries, and it can harm the public sector by creating a “race to the bottom” in which countries starve their public sectors to prevent capital flight. The authors nicely refute both arguments, noting that tax competition is not a zero-sum game: tax structures that are more capital friendly encourage increases in investment that make everybody better off. They also note that tax competition makes governments more accountable because they must perform up to the standards of competing governments. Thus, tax competition can be a vehicle for enhancing the public sector’s productivity. People are often concerned that tax competition might erode the government’s provision of basic services, but the authors note that most government spending is not for the provision of basic services, but for income redistribution.

In chapter 8, “The Battle for Freedom and Competition,” Edwards and Mitchell argue that tax competition tends to provide a check on the size of government and indicate that governments have therefore pursued policies to limit such competition. In the name of efficiency, governments have pursued harmonization of their tax structures—a requirement for European Union member nations—which essentially cartelizes tax systems and limits competition. Further, higher-taxing nations have tried to curtail international tax competition by waging a war on “tax havens.” The OECD has targeted more than forty nations, which tend to be smaller and lessdeveloped countries, to try to coerce them into eliminating what the high-tax governments have identified as “harmful” tax practices. The authors note that many of the features the OECD identifies as harmful are arbitrary and subjective and might easily apply to other countries, including OECD members. The thing all “tax havens” have in common, however, is low taxes. The chapter illustrates how the OECD, the European Union, and the United Nations have attacked tax competition, supporting cartel-like behavior in which nations cooperate to keep their tax rates up rather than encouraging them to design business-friendly tax codes. The authors conclude the chapter by encouraging the United States to fight tax cartels and to refuse to participate in efforts by developed nations to bully smaller countries around the world to limit their tax competition.

Chapter 9, “The Moral Case for Tax Competition,” contends that such competition allows people to protect themselves from government-induced financial calamities. The chapter begins with several hypothetical examples of how tax competition can protect individuals and how tax havens can enhance such protection. The authors discuss the advantages of financial privacy, including the protection of individuals from predation by both private-sector predators and those in government who are able to identify and target wealth. Although tax evasion is an issue, the authors note that high tax rates are a primary cause of tax evasion and that lower taxes are beneficial to economic growth. Tax competition, including tax havens, leads to lower taxes and improves the economy’s performance. Economic growth makes everybody better off. This chapter comes across as the weakest one in the book, however, perhaps because it is difficult to bring data to bear on moral issues, whereas the arguments in other chapters are solidly supported by data. If a danger exists that private- and public-sector predators take advantage of a lack of financial privacy in high-tax countries, a few scary stories, even if anecdotal, would have made the argument stronger.

In chapter 10, “Options for U.S. Policy,” Edwards and Mitchell argue that the United States should oppose restrictions on tax competition, listing a number of specific things the government might do to follow up on this recommendation. They also argue that the United States should cut individual and corporate income tax rates and adopt territorial taxation that would exempt foreign profits from U.S. taxation. Their final recommendation is adoption of a flat tax.

The authors effectively support their case for international tax competition with straightforward arguments and a great deal of data. A minor quibble is that they focus heavily on income and capital taxes and barely mention the value-added tax (VAT) that generates a huge amount of revenue in most developed economies. One reason income tax rates are not higher in Europe and other developed nations is that the VAT raises so much revenue. The United States remains (fortunately) one of the few developed economies without a VAT. By largely omitting the VAT from discussion, the authors probably overstate the effects of high income tax rates in the United States, but more significantly in a book about global tax competition, they neglect the VAT’s role in this competition.

Quibbles aside, Edwards and Mitchell make a strong case for a U.S. policy of lowering tax rates to promote prosperity, showing that countries that are strong competitors in global tax policy end up prospering relative to those that join and promote the world’s high-tax cartels.