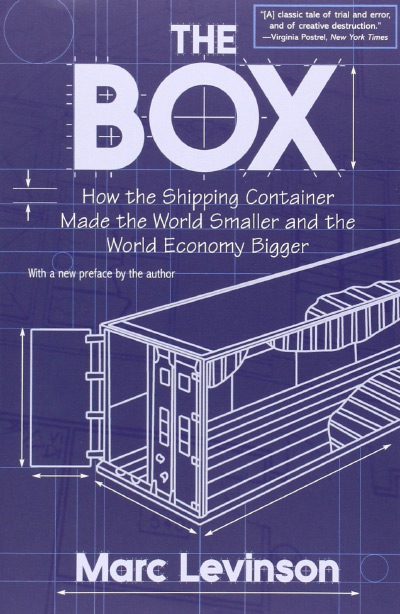 The Box
How the Shipping Container Made the World Smaller and the World Economy Bigger
Marc Levinson
Hardcover Paperback Audiobook
This book review appeared in the Summer 2007 issue of The Independent Review.

Several hundred books on globalization are now published each year, but very few discuss in any detail the unprepossessing aluminum or steel boxes, in lengths of twenty or forty feet (or sometimes longer), that have become the building blocks of our modern economy. This oversight is unfortunate because more than 18 million containers are now constantly crisscrossing the globe on more than 3,500 cargo ships and countless trucks and trains. At ports and other cargo terminals, giant grab cranes load and unload the huge boxes. Container-based shipping has sharply cut transportation costs and time, enhanced reliability, reduced pilferage and theft, and slashed insurance rates. Containers have been directly responsible for, among other things, an enormous increase in the volume of international trade; the creation of complex “just in time” supply and manufacturing chains built around the geographically dispersed production of intermediary goods; the rapid industrialization of China; and a significant decline in the price of consumer goods. Unlike traditional waterfront activities, however, container shipping usually takes place out of most people’s sight and as a result remains perhaps the greatest hidden wonder of our age.

Although The Box may be somewhat too American centered, economist and business journalist Marc Levinson has written an eminently readable history of the advent of the modern logistics industry that goes a long way toward bringing the attention of a nonspecialist audience to the topic. Despite his belief that his subject has “all the romance of a tin can” (p. 1), his account is anything but dull because he builds much of his narrative around a cast of colorful entrepreneurs, engineers, and union leaders. The most significant character is Malcom P. McLean, who launched modern containerization in April 1956 by having fifty-eight truck trailers loaded onboard a refitted oil tanker that sailed from Newark, New Jersey, to Houston. The main background to Levinson’s account, however, consists of the various roadblocks to containerization put in place and enforced by government regulators in agencies such as the Interstate Commerce Commission (ICC), the United States Maritime Administration, and the Federal Maritime Board. In the author’s opinion, the bureaucrats, far from having the consumer’s best interest in mind, usually undertook to protect established commercial interests by limiting competition in the transportation industry.

As Levinson observes, the idea of shipping freight in large boxes goes back at least to the late nineteenth century, when some British and French railway operators tried to move household furniture stored in wooden boxes from rail flatcars to horse carts. Early American implementation of the concept, however, bumped into the stone walls erected by regulatory agencies. Among other decisions, the ICC put a stop to an early attempt at containerization by a midwestern railroad in the early 1930s because the railroad offered weight-based rates for its services rather than charging a specific rate for each commodity, as required at that time. Although the ICC commissioners found the container to be “a commendable piece of equipment,” they mandated that railroads could not charge less to carry a container than the equivalent weight of the most expensive commodity stored in it.

The situation was much the same on the maritime side of the transit. The problem was not that seamen failed to notice the significance of the time and costs associated with the labor-intensive loading and unloading of loose cargo in so-called break bulk ships. Indeed, most of them were keenly aware of the problems high-lighted by two studies prepared in the 1950s, which found that longshoremen labor accounted for half of the total duration of one particular transatlantic voyage and between 60 and 75 percent of the cost of transporting cargo in another voyage. Nevertheless, most industry insiders had become comfortable working within the rigid regulatory and governmental support structure. As Levinson notes, for all their “earthy bluster,” the businesses of America’s leading maritime industry operators had survived, “thanks almost entirely to government coddling”: “On domestic routes, government policy discouraged competition among ship lines. On international routes, rates for every commodity were fixed by conferences, a polite term for cartels, and the most important cargo, military freight, was handed out among U.S.-flag carriers without the nuisance of competitive bidding. Decisions about buying, building, or selling ships, about leasing terminals, and about sailing new routes all depended upon government directives” (pp. 150–51).

Laws and regulations further ensured that trucks and ships had nothing in common, thereby inhibiting rationalization through multimodal transport. As Levinson observes, McLean’s idea that “a truck line would use its own trucks to drive its own trailers on board its own ships, float the trailer down the coast, and then drive them to their destination at the other end violated the ICC’s basic precepts” (pp. 43–44). The problem was that the ICC had allowed ship rates to be set well below rail and truck rates to compensate for slower service. McLean, in sending his trucks by water, would severely underprice other truckers. He eventually found a way to circumvent regulatory barriers by acquiring shipping lines that had been granted monopoly on lucrative routes and by moving out of the trucking business altogether while maintaining good relations with former collaborators.

Of course, regulatory barriers were not the only obstacle that modern logistics pioneers had to overcome. Longshoremen’s unions strongly opposed containerization until their members were given generous job-buyout packages. As might have been expected, however, both labor and port authorities receptive to technological progress ended up better off than their more “stubborn” competitors, in part because containerization led to the disappearance of several smaller ports.

Bureaucratic inertia in the U.S. military was another problem. In this case, the creation of the “greatest logistical mess in the history of the U.S. armed forces” (p. 171), Vietnam in the late 1960s, finally gave McLean and his associates an opportunity to prove the tremendous benefits of their approach. McLean benefited doubly because not only was he generously compensated by the U.S. military, but he also managed to inaugurate the first commercial container service between Japan and the United States in the process.

Following his lead, several American engineers, technicians, and managers eventually developed, from the 1960s onward, new types of containers as well as specialized port facilities and equipment to handle them. Although Levinson provides much detail on these developments, including the intricate financing schemes that were crucial in making them a reality, he unfortunately fails to include a single illustration in his book (with the exception of the dust-jacket cover), leaving his reader often wondering what earlier technologies actually looked like. Despite this shortcoming, readers with an interest in business and technological history will find many valuable descriptions and case studies in his account. In the end, though, today’s fully integrated container shipping system became a reality only after the rail, trucking, and maritime deregulation in the 1970s and 1980s.

Levinson’s treatment of the revolutionary days of container shipping, which lasted until the early 1980s, is very thorough, but his account of the more recent past is much less so. Indeed, people familiar with the industry may get the impression that a final (non-American) chapter is missing from the book. For example, although Levinson describes the rise of container ports in western Europe and East Asia, he devotes only two paragraphs to the fact that European and Asian firms that were late entrants in the game now dominate the industry. No U.S. firm is currently listed in the world’s top eighteen container ship companies. Five of these top firms (including the three largest) are headquartered in Europe, three in China (two in mainland China and one in Hong Kong), three in Japan, two in Taiwan, two in South Korea, and the remaining three in Singapore, Chile, and Israel. (See Ted Smith-Peterson, “Railroading’s New Economy: The Spigot,” Trains 66, no. 9 [2006]: 34–41.) In Levinson’s opinion, these late entrants achieved success because they “arrived with financial and managerial skills foreign to many of the carriers they replaced, skills appropriate to an industry in which raising capital and managing information systems were far more important than maritime knowledge” and because they were not burdened with “the legacy of government subsidies and directives that had crippled many of their predecessors by forcing them to buy ships built in their home countries or to sail routes determined by regulators” (p. 275). No doubt many readers would like to know more about these developments and about which skills Levinson means. Levinson also barely alludes to more recent technological advances and to the amazing fact that the rest of the world now handles only one-third as many containers as the Chinese do (for both domestic and international trade). Furthermore, in the words of one industry analyst, China has now become the “U.S. railroads’ growth engine” and has been the cause of an American “rail renaissance” (Tom Murray, “Railroading’s New Economy: The China Factor,” Trains 66, no. 8 [2006], p. 28).

Despite such shortcomings, however, The Box is highly recommended for anyone with an interest in understanding the emergence of our contemporary “globalized” world economy.